The pop duo New Jiew have managed to stay popular for more than a decade. This is due to their stylish and powerful singing, as well as songs about broken hearts that listeners can relate to.

The video is about a girl who decides to have cosmetic surgery. She wants to change her appearance after she finds out that her fiancé has cheated on her. The heart-breaking storyline goes well with the emotional song. The video has been extremely popular, with three million views in its first week.

S Weekly met up with the duo at GMM Grammy, where they talked about the video, their music and working in harmony. 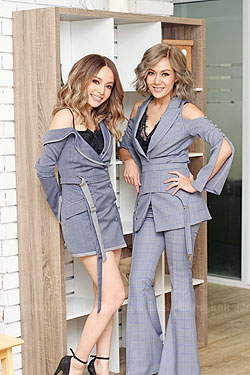 Do you feel pressure when a new music video is released?

New: No. The number of views isn’t our goal. That’s up to viewers. If they enjoy it, they’ll share it and more people will see the video.

How do you feel about having another dramatic storyline for your music video?

Jiew: We’re OK with it. We probably won’t get an opportunity to have a funny music video because most of our songs are dramatic. This video tells the story of a person we can relate to.

If a friend wanted cosmetic surgery because she broke up with a boyfriend, how would you react?

Jiew: I would make sure she doesn’t do it when she's angry. If her decision doesn’t harm anybody, including herself, it’s fine. This is similar to when a broken-hearted girl decides to cut her hair to make her appearance different.

Since the song is called “Erase Minutes About You,” have you ever wanted to erase any moments from your past?

Jiew: I want to erase my shopping moments. [Laughs.] I can’t stop shopping and often buy things similar to what I already have.

As professional singers, what does music mean to you?

New: Music is like a friend. It allows me to know myself better. I also made friends like Jiew through music. Music has been with me since I was very young. 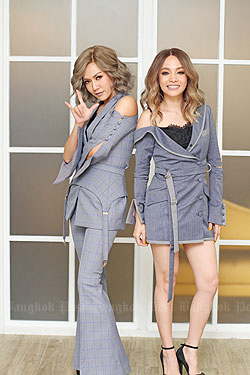 What is your secret to staying popular?

Jiew: We are responsible for our jobs. People have certain expectations for our performances, so we have to keep improving ourselves. If we don’t, listeners will notice that we are not as dedicated to our work as before.

Have there been any unexpected moments during a performance?

Jiew: Many times. Sometimes, I forget the lyrics. Fortunately, our audiences find that funny and help us to sing. Every mistake teaches us how to communicate with fans and each other onstage.

Did you enjoy being judges on the TV singing competition, La Banda Thailand?

Jiew: Yes. In the beginning, I found it hard to make comments about the competitors. I didn’t want to be too straightforward because I was worried about hurting their feelings. I tried to talk about my experiences to help them move forward.

Did you enjoy acting in the TV series Bad Friends?

Jiew: While filming, I sometimes asked myself what I was doing. I even cried because my character expressed herself in a way that I don’t in public. I had to use a lot of imagination and feeling to become the character.

New: We were lucky to play characters similar to ourselves. Otherwise, it would have been more difficult. Having done some acting, we now realise how great actors are.

Say a few words about your singing partner.

New: Jiew is very disciplined. She’s organised, well-prepared and takes good care of me. If I have a problem, I always talk to her and she gives me very good advice.

Jiew: New is cheerful, optimistic and usually in a good mood. But if she gets mad, it can be like a big storm. [Laughs.]

dedicated : (adj) working hard at something because it is very important to you -

energetic : having or involving a lot of energy - กระตือรือร้น, กระฉับกระเฉง

erase : to remove something completely - ลบ

straightforward (adj): honest and not tending to hide your opinions - ตรงๆ