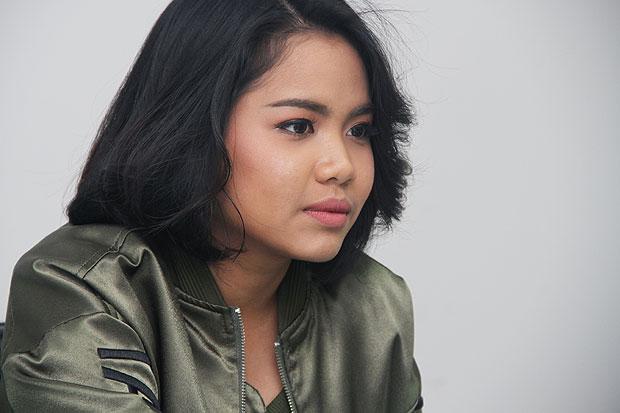 It’s one thing to break into showbiz. It’s another to stay at the top. These days, if a performer wants their career to last, they have to develop their skills. Singers have to learn how to act and actors have to learn how to sing. It’s challenging, but with hard work and determination, the most talented can succeed.

The champion of The Star Season 11, Radubdow Srirawong (Matung) recently made the move from singing to acting. After releasing the cover single, “Thon Dai Thook Thee (Always Be Patient)” - originally sung by Tum Somprasong - Channel One asked her if she’d like a role in their new show. She said yes. In the upcoming drama Dow Ja Rus Fah (Shining Star), Matung will star as a luk thung dancer called Lae.

S Weekly met up with the young star at Grand Musik where she told us about her recent single, acting and Valentine’s Day. 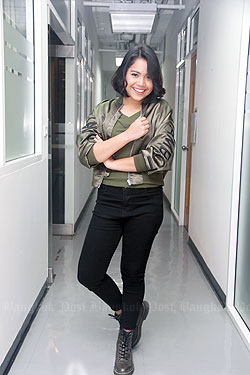 Is Valentine’s Day important to you?

Matung: Not at all. The idea of giving flowers and heart-shaped stickers to others is adorable, but I don’t pay much attention.

What is your most memorable Valentine’s Day?

Matung: When I was a Matayom 3 student in Udon Thani, I received chocolates from a schoolmate. We liked each other and dated for a while. But after I moved to Bangkok, we grew apart. We’re still friends on Facebook though.

What apps do people your age use for dating?

Matung: My friends use Instagram. If they see somebody they like, they’ll keep clicking on the “heart” icon until the person notices them.

What do you think about breaking up with somebody online?

Matung: It’s become common these days. But I think talking face-to-face is better.

How did you feel about covering “Always Be Patient”?

Matung: I felt under pressure because the original was so fantastic. But I’m happy to sing a song I like. I heard it for the first time in a singing competition two years ago. It’s very well written. The lyrics are really cool.

You’re still very young. How are you able to express complex emotions in your songs?

Matung: People ask me about this a lot. I have many friends and they like to talk to me about their problems. I notice how they react and I use it in the songs. 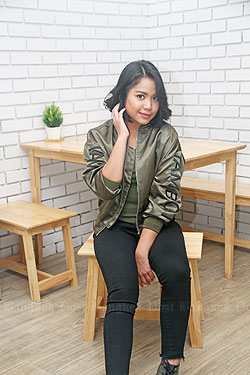 Can you tell us about the character you play in Shining Star?

Matung: I really like my character. Lae is hilarious. She can lighten the mood and relieve tension in stressful situations. She always helps out the main character Dow, who’s played by Noona Nuengtida.

Was it challenging to play a luk thung dancer?

Matung: It was quite difficult because the other dancers were professionals. They knew the routines well and could change from one to another quickly and easily.

It took me a long time to learn. But I enjoyed every scene. I never felt tired.

Matung: She’s very kind. She gave me advice about acting and camera angles.

Is it true that you were an assistant director for a school stage play?

Matung: Yes. I also worked as an acting coach. I didn’t have much acting experience, but when I saw my friends perform, I was able to make suggestions and the teacher agreed with me. We competed with two other plays produced by Matayom 6 students. Ours won six awards!

Click "play" to listen to She’s all that and "Download" to keep this file for educational purpose.

adorable : cute, looks nice in a way that makes you like them a lot -

complex : having a lot of details or small parts that make it difficult to understand or deal with - ซับซ้อน

date : to have a romantic appointment with somebody - นัดพบ

determination : the quality that makes you continue trying to do something even when this is difficult - ความตั้งใจ, ความมุ่งมั่น, ความตั้งใจมั่น

routine : a series of movements, jokes, etc. that are part of a performance -

tension : the feeling of being so nervous or worried that you can’t relax - ความตึงเครียด