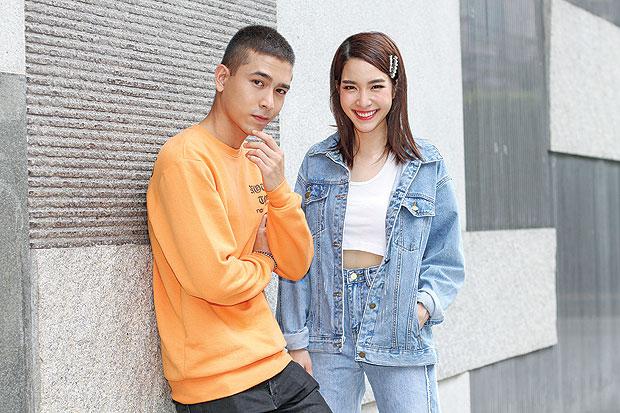 Mo and Tommy are rivals in a love triangle

Love is complicated. It’s more complicated if you fall in love with more than one person. And it’s even more complicated still if those people are of different genders. This is the subject of the romantic comedy, Love Song Love Series: Puen Gun Wan Soodtai (Our Last Day as Friends).

Monchanok Saengchaipiangpen (Mo) stars as May. After breaking up with her boyfriend, she decides to travel to Japan with her photographer friend Safe, played by Kacha Nontanun. Once there, they develop feelings for each other. But Safe’s assistant Yod, played by Sittichok Pueakpoolpol (Tommy), also has a crush on him. And Safe has feelings for Yod too. So Safe has to decide which one he really wants to be with.

S Weekly met up with 26-year-old Mo and 22-year-old Tommy at GMM25 where the stars told us about acting and friendship. 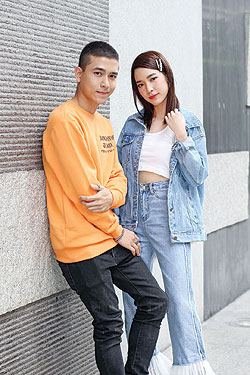 Since the show was inspired by a song, what kind of music are you interested in?

Tommy: My favourite artist is Noi from the band Pru. I was a vocalist in a band with my friends when I was in high school. We liked to play songs by rock bands such as Paradox and Bodyslam.

Mo: I like alternative music. My favourite band is the American indie group Foster the People. And I just went to see No Vacation in concert.

When did you realise that you wanted to be a professional actor?

Tommy: I started out acting in TV commercials and I really enjoyed the experience. I wouldn’t like a routine job. Acting allows me to travel and develop my performing skills and personality. I used to be very shy. Now, I’m more confident.

Mo: Ever since I was in the movie, Rak Mun Yai Mak (Big Love) in 2011, I’ve known that acting is for me. The job has made me more responsible and I have fun at work.

Which of your characters was the most difficult to play so far?

Mo: Ploy in the series Rak Long Jai (Test Love). I didn’t understand her because she asked her boyfriend to hit on another woman. It didn’t make sense to me. But I realised that if I was going to play her then I shouldn’t judge her.

Tommy: Boonthing in the period piece King Naresuan. The dialogue was difficult to understand and remember because there were a lot of unusual words. I felt very tense on set. I was afraid that my bad acting would put the other actors off. But they were very kind and helped me out.

What kind of friend are you?

Tommy: If a friend needs my help, I’ll always be there for them. In high school, my friends liked to talk to me when they were hurt or down. And I tried to give them good advice.

Mo: My friends take care of me. They help me out with everything. If a friend wants somebody to have a meal with, they can call me. 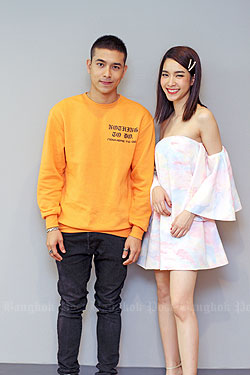 Do you think it’s a good idea to start a relationship with a friend?

Tommy: If you don’t break up, it’s great because you’ve already been through a lot together and can understand each other well. But it’s sad if you have to break up. I wouldn’t like to have a romantic relationship with a friend because I don’t want to ruin our friendship.

What was it like to work with each other?

Tommy: Mo is very friendly and made me comfortable on set.

Mo: Tommy is a nice guy and a determined actor.

Did you enjoy working in Japan?

Tommy: I was impressed with the spectacular views on the beach, but it was so windy and the weather was freezing. I found it hard to act.

Mo: The Japanese crew was very nice and well organised. I was really impressed. We filmed in Kitakyushu and several others places. If possible, I’d love to go back there on vacation.

Click "play" to listen to Three’s a crowd and "Download" to keep this file for educational purpose.

commercial : an advertisement on the radio or on television - โฆษณาทางโทรทัศน์หรือวิทยุ

determined : wanting to do something very much and not letting anyone or any difficulties stop you - ตั้งใจจริง, ซึ่งมุ่งมั่น

gender : the fact of being either male or female - เพศ

judge : to form an opinion about somebody/something, based on the information you have - คาดคะเน

period drama (noun): a play, movie or book that takes place in a particular historical time, i.e., not the present -

responsible : sensible, reliable, and able to be trusted to do the right thing - มีความรับผิดชอบ

ruin : to damage something so badly that it loses all its value, pleasure, etc; to spoil something - ทำลาย