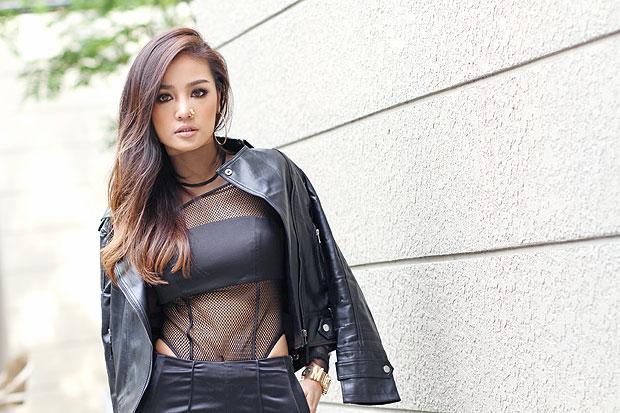 Some people are born to sing. Nipaporn Boonyaliang (Kratae) is one of them. Growing up with parents who were also luk thung singers, Kratae has long been familiar with music and the stage. And although she did it to earn money and support her family, singing has become something she loves.

To appeal to a wider audience, Kratae learned to sing in English and Mandarin. She was discovered by talent scouts and released albums with music label R Siam. Last year, the 31-year-old stunned viewers with her talents on the show, Sing Your Face Off, in which celebrities transform themselves to look and sound like famous singers. Kratae performed Beyonce’s “Listen,” Hyuna’s “Change” and the Hindi classic “Dola Re Dola.”

Inspired by Indian music and dancing, Kratae recently released the self-written tune “Na Na (Mera Pyar).” S Weekly caught up with her to talk about this and her career as a whole. 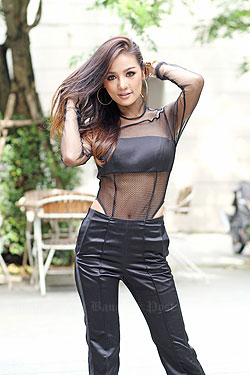 How do you practise foreign language songs?

Kratae: I listen and concentrate on how they pronounce each word. Then, I try to imitate them. I don’t focus only on the lyrics. You can mispronounce the words if you keep looking at the lyrics without listening to the singers carefully.

Have you ever taken singing lessons?

Kratae: I took voice projection lessons after I underwent surgery on my larynx. I learned how to sing from watching my parents. I didn’t know how to project my voice properly. That’s how I damaged my larynx.

Kratae: I can dance in many styles, but I wasn’t born like this. I love dancing and am dedicated to it. I’ve learned many techniques from my choreographers and have practised very hard over the years. If possible, I’d like to spend a month in LA to learn more about dancing. I was there before and I found that American dancers are amazing even though they’re so young.

Which song was the most difficult to sing on Sing Your Face Off?

Kratae: “Express” by Christina Aguilera, “Listen” and “Dola Re Dola.” The English songs require powerful vocals while "Dola Re Dola" has very high notes and its vibrato is unique. It was difficult to imitate.

Why did you decide to write “Mera Pyar” in an Indian style?

Kratae: I’ve always been a fan of Indian traditional costumes and culture. I was very happy to sing “Dola Re Dola,” though the song was difficult. “Mera Pyar” is a fun song that makes listeners want to get up and dance. 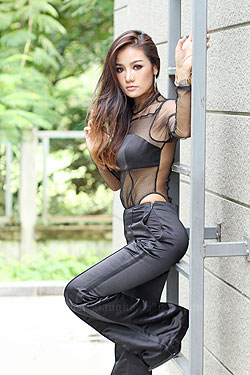 Is it true that you're a student of Bharata Natyam, the Indian classical dance?

Kratae: Yes. There’s a part in the music video that features Bharata Natyam. And I learned the choreography from an Indian instructor. It was so difficult. I had to practise for a month. The dance routines combine strength and flexibility. There are lots of details like eye movements, neck movements and footwork.

Kratae: I toured many countries including Germany and Belgium in the last two years. My audiences were Thais who lived there. It was great fun because they missed Thai songs, so they were so happy and full of energy during my performances. I was happy to be there.

How did you handle negative comments?

Kratae: I used to reply to trolls because I wanted my explanations to be heard. But the arguments became endless. I later learned that the best way to deal with criticism is to stay calm and prove who I am by doing a good job. I also meditate to help me stay calm.

Click "play" to listen to In her voice and "Download" to keep this file for educational purpose.

choreographer (noun): a person whose job involves designing and arranging the steps and movements in dances, especially in ballet -

imitate : to copy something - เลียนแบบ

meditate (verb): to think deeply, usually in silence, especially for religious reasons or in order to make your mind calm - ทำสมาธิ

projection : to project out, when an object goes out from a place or location a certain distance -

pronounce : (v) to make the sound of a word or letter in a particular way -

stunned (verb): (past tense) caused to be very shocked or upset - ทำให้ตกใจ ทำให้วิตกกังวล

troll (noun): a person who sends a message to a discussion group on the Internet to make other people angry; a message like this - บุคคลผู้ไม่เป็นที่ต้องการในโลกออนไลน์ บุคคลผู้ไม่มีสมอง

vibrato (n): a shaking effect made while singing or playing a musical instrument -