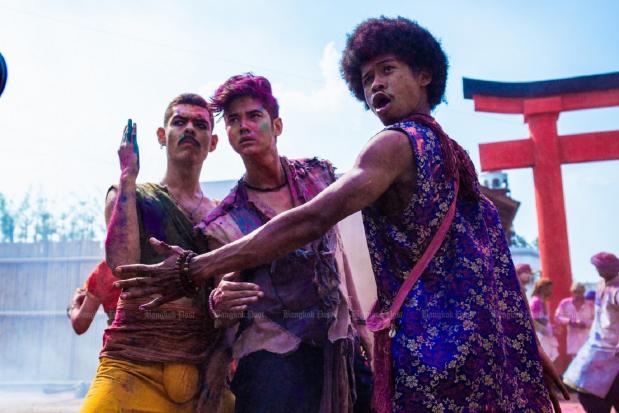 Can Mario save the day and get the girl?

Set in the Ayutthaya period, Khun Phaen Fah Fuen (Khun Phaen Begins) is directed by Kongkiat Khomsiri who is known for making Thai period movies such as Chaiya and Khun Pun. Khun Phaen Begins follows the adventures of a vagabond Kaew (Mario Maurer) who loses his childhood memory. When Kaew wanders to Ayutthaya city, he meets his childhood friend Chang (Philip Thinroj) and his crush Pim (Yongwaree Ngamkasem). While staying in the city, he sees images of the past and believes that his father was executed because he was a traitor.

Kaew meets a magical master Dej (Supakorn Kitsuwonwho) who has been looking for a student. Master Dej thinks Kaew has the potential to become a great warrior. He decides to provides him knowledge of magic. Kaew later becomes a soldier in order to restore his family dignity.

When Ayutthaya is attacked by the enemy, Kaew and Chang join the army to fight for the kingdom, but in the meantime, they fight each other to win over their love, Pim. Can Kaew save the kingdom and win over Pim? Find out in cinemas near you on October 10.

dignity : respect that other people have for you or that you have for yourself - ศักดิ์ศรี

execute (verb): to kill someone as a punishment for a crime or without giving them a chance to defend themselves or run away - ประหารชีวิต

period drama (noun): a play, movie or book that takes place in a particular historical time, i.e., not the present -

potential : qualities that exist and can be developed - ศักยภาพที่จะพัฒนาได้

traitor : a person who is not loyal or stops being loyal to their own country, social class, beliefs, etc. - ผู้ทรยศ

vagabond : someone with no job or home who travels from place to place -

wander : roam; to travel from place to place without a particular direction or purpose - เดินทางไปโดยไม่มีจุดหมายที่แน่นอน, ร่อนเร่

warrior : a soldier or fighter, especially in the past - นักรบในสงคราม