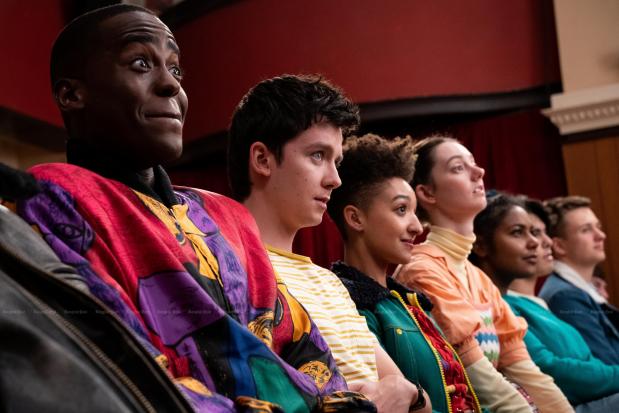 The hit teen comedy Sex Education returns for more of everything you wanted to know about but were afraid to ask.

In season 1 Otis and his friend, Maeve Wiley (Emma Mackey), set up a sex clinic at school to capitalise on his intuitive talent for sex advice. Now, in season 2, as a late bloomer, Otis must master his newly discovered sexual urges in order to make progress with his girlfriend, whilst also dealing with his now strained relationship with Maeve. Meanwhile, Moordale Secondary is in the throes of a chlamydia outbreak, highlighting the need for better sex education at the school, and new kids come to town who challenge the status quo.

Join Otis, as he learns to grow personally and socially, with many funny and moving hiccups along the way, when Sex Education Season 2 launches on Netflix on Jan 17.

capitalise on : to use an event or a situation to help you to achieve something or to get an advantage - ใช้ประโยชน์ให้เต็มที่จาก

chlamydia : a disease caused by bacteria, which is caught by having sex with an infected person -

in the throes of : in the middle of an activity, especially a difficult or complicated one -

intuitive (adj.): knowing something from intuition or feeling rather than observation, reasoning and logic - โดยสัญชาตญาณ,โดยความรู้สึกที่เกิดขึ้นเองในใจ,โดยสหัชญาณ,โดยการหยั่งรู้

late bloomer : a person who is a success later in life -

status quo (noun): the situation as it is now, or as it was before a recent change - สถานภาพปัจจุบัน, สถานภาพที่เป็นอยู่, ฐานะที่เป็นอยู่

strained : not relaxed or friendly - เครียด

therapist : someone whose job is to treat a particular type of mental or physical illness or disability, usually with a specific type of treatment - นักบำบัดโรค, ผู้เชี่ยวชาญในการบำบัดโรค