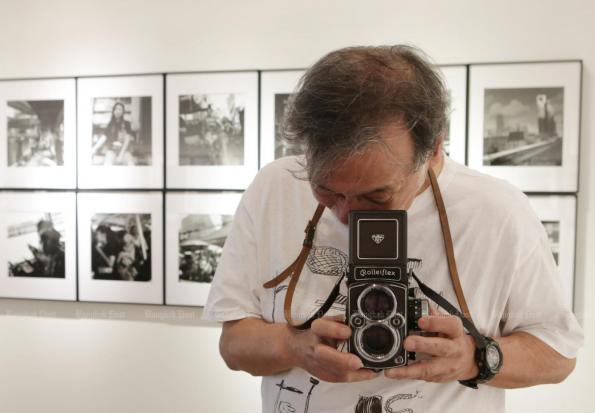 A Japanese photographer makes art in the city

Bangkok is always changing. Large empty fields are replaced by tall buildings and luxurious malls. Public transportation reaches further into the suburbs. And the once friendly and smiling Thai people now prefer staring at their smartphones rather than paying attention to others.

Japanese street photographer Shunji Dodo documented the changes for his black and white photo book, A City Aglow. The book features 290 photos with 54 selected for display at the exhibition under the same title at Serindia Gallery (visits by appointment only).

"A City Aglow means a city or an area during dusk [the time between sunset and darkness] which makes people feel warm and lively. The photos were taken using twin-lens reflex cameras from 1984 to 1991 and 2014 to 2019," Shunji said through a translator.

Shunji, who comes from Shinsekai in Osaka, started taking photos while he was a student at university. The young Shunji was really passionate about photography. In his spare time, he shot about 500 rolls of film in order to improve his skills.

Before his first visit to Bangkok, he liked to take photos of people in his neighbourhood of Shinsekai. When his American friend saw his work, he told Shunji that Thailand had areas which were similar to Shinsekai and asked the Japanese photographer to take photos in Thailand.

"I came to Thailand in 1984. After flying into Don Mueang Airport, I met my American friend who took me to the Swan Hotel, located close to the Serindia Gallery. I saw the hotel yesterday. It’s still there. It reminded me of my first visit to Thailand when I travelled around the country by train. I was in Chiang Mai, Ayutthaya, Hua Hin and Pattaya. Among these cities, I was attracted to Bangkok the most and returned to the capital about 10 times."

"It had changed a lot. It wasn't only lots of streets, expressways and cars. People dressed beautifully, but I was shocked to see how addicted people were to mobile phones. Japanese people use smartphones too, but we weren't that addicted. I could see the way people communicated had changed," he said.

After 2014, Shunji revisited Bangkok to shoot photos several times. He spent around 10 days to two weeks per visit. He changed accommodation each time, so he could see a variety of people and architecture. Things have changed a lot, but he was particularly impressed with an area around Hua Lamphong station.

"That area didn't change at all. It’s a centre of connection to every region. We can see people from other regions travel to this developed city. The design of the station building is terrific. I heard that the station architecture will be changed. I hope it can be preserved the way it is. It’s unfortunate if it will be changed," the photographer said.

When he was asked to compare Tokyo people to Bangkokians, Shunji said Tokyo and Bangkok are centres for people from many places. Both cities mix people from different areas together.

"Bangkokians are laid-back. They do things in Thai style and hope it will turn out fine. Thirty years ago, when having appointments, Thai people came late by a couple of hours. At that time, I couldn't contact them and ask what was going on. However, in recent years, people are more punctual, but still late by an hour. And compared to Japanese women, many Thai women work outside their home. I often saw many more female sales staff and waitresses than male employees," said Shunji.

Section 1: Write the correct answer in the space provided.

4. He says Japanese people are addicted to their phones. True or false? …………….

7. He says there are similarities between Tokyo and Bangkok. True or false? …………….

"The Chao Phraya River is a part of Bangkok that makes the city …14… . We can walk around an …15… and then take a boat to do some sightseeing in another part of town. In the past, a street was …16… with lots of motorcycles and tuk-tuks and …17… vehicle horns. …18…, there are still lots of vehicles, but I see less black smoke and hear less loud horns. It seems like the capital has grown from a child into an adult who is more …19… to others."

14. A. attract  B. attractive C. attractions

19. A. general B. generation C. generous

Click "play" to listen to TEST YOURSELF: Bangkok aglow and "Download" to keep this file for educational purpose.