TEST YOURSELF: A train to nowhere | Bangkok Post: learning 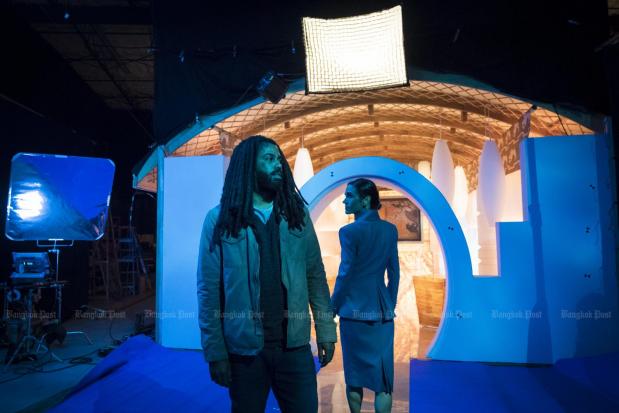 Snowpiercer the movie, by Oscar-winning director Bong Joon-ho, explored class, politics and social injustice among the last survivors on Earth. Now, the story is back in a new Netflix TV series.

Snowpiercer, the 2013 movie, was made famous under Korean filmmaker Bong's direction, with a cast led by Chris Evans and Tilda Swinton. The film saw the poor in the end of the train fight their way to the rich front.

In the TV series, a new director leads a cast led by Jennifer Connelly and Daveed Diggs. The story is set seven years after Earth has frozen over and follows a new storyline and characters, with some shared elements from the film.

Life recently chatted with showrunner Graeme Manson and leading man Diggs about their time on board Snowpiercer.

"I love how the movie manages to be so crazy yet so political, and to smuggle a lot of messages there and allow you to put your own message onto the film," said Manson.

While Bong's movie showed the journey of the rebels, the series -- with 10 episodes in its first season, and second season already on the way -- has more time to get to know the lives of those in each class.

"Because of the short running time, the movie has to kind of choose one idea and run with it, and the movie does that so brilliantly. But for people who want more, the TV show [can do that] because we just have more time," said Diggs.

The train offers a contrast where, at one end, people try to survive in poor living conditions. But at the other end of the train, people dress well and can enjoy luxuries such as a sauna. Melanie Cavill (Connelly) serves as the voice of the train, making daily announcements to passengers. Diggs plays Layton, a former detective living in the poor section. He is taken out of his part of the train to solve a murder among the upper class.

Diggs described his character as concerned about making the world better for the younger generation and his own people. He called the "Tailies", the people living in the train's tail, a big family.

"Everybody back there struggles and survives together and are forced to live in very close quarters. You know everybody really well. There's not much room back there for secrets."

In a way, that's also the worst thing about being a Tailie: no secrets.

"There's such a lack of privacy down there. You don't have anything that's really only yours," he added.

Snowpiercer the series has been in production for years, only to be released now in the middle of the pandemic. Diggs says the show has felt relevant to him from the start, since he read the script four years ago.

"The idea that everybody on the train is sort of longing for a time that is passed … and misses something about the world, that feels very relevant right now," said Diggs.

A new episode of Snowpiercer airs weekly on Mondays on Netflix, starting from 2pm. Manson promised lots of excitement as audiences follow the story all the way to the end of the season, which he said is set to end with a big cliffhanger.

5. Layton investigates the murder of one of the Tailies. True or false? …………….

6. Layton wants to make life better for everyone on the train. True or false? …………..

Director Bong, who serves as the show's executive producer, also visited the set a …14… times. While not …15… in the series' day-to-day operations, Bong gave his …16… to the set. He was …17… with the vast studio space used to film the show. The filmmaker was also happy …18… the action, adventure and politics are alive in the series.

"We all just felt really happy that Bong let us know that he was …19… on board the train," said Manson. "Our train.”

20. a group sharing the same economic or social status ……………

22. an obvious difference between two things ……………

Click "play" to listen to TEST YOURSELF: A train to nowhere and "Download" to keep this file for educational purpose.