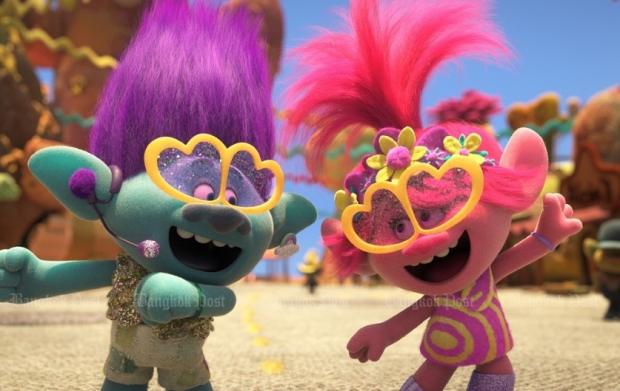 The singing toy Trolls are going on tour

Anna Kendrick and Justin Timberlake return in Trolls World Tour, an all-star sequel to the 2016 musical hit, Trolls. In an adventure that will take them well beyond what they’ve known before, Poppy (Kendrick) and Branch (Timberlake) discover that they are but one of six different Trolls tribes scattered over six different lands and devoted to six different kinds of music: Funk, Country, Techno, Classical, Pop and Rock. Their world is about to get a lot bigger and a whole lot louder.

A member of hard-rock royalty, Queen Barb, helped by her father King Thrash, wants to destroy all other kinds of music to let Rock reign. With the fate of the world at stake, Poppy and Branch, along with their friends, set out to visit all the other lands to unify the Trolls against Barb, who’s looking to beat them all.

Sing along when Trolls World Tour opens in cinemas on 25 June.

devote to : to give most of your time, energy, attention, etc. to somebody/something - มอบให้,อุทิศ,ยกให้

royalty : the people who belong to the family of a king and queen - บุคคลในราชวงศ์

scatter (verb): to spread over a large area - กระจัดกระจาย

tribe : a group of people of the same race, and with the same customs, language, religion, etc, living in a particular area and often led by a chief - เผ่า, เผ่าพันธุ์

unify (verb): to join people, things, parts of a country, etc. together so that they form a single unit - ทำให้เป็นอันหนึ่งอันเดียว, รวมกัน