TEST YOURSELF: End of an era | Bangkok Post: learning 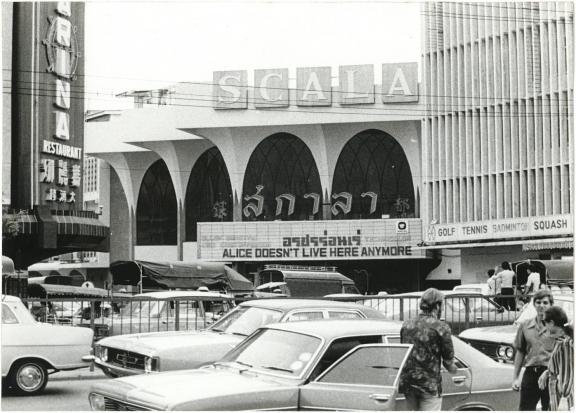 The Scala movie theatre closed its doors with a special event

The Scala, Bangkok’s last stand-alone cinema and a landmark of the Siam Square area, has shown its last movie. People queued for hours to buy tickets for the "La Scala" event which took place last Saturday and Sunday. Then the movie theatre closed its doors for good after serving Thai cinemagoers for more than half a century.

From Friday 3rd to Sunday 5th July, the cinema turned on all its lights in the evening. Photographers and art lovers had one last chance to capture and appreciate the legendary venue's beautiful architecture.

Blow-Up, the 1966 cult classic film, was one of the two main films along with two documentaries that are part of the "La Scala" event, organised with the Thai Film Archive.

The other main feature, 1988’s Cinema Paradiso, is perfect for Scala's farewell as it's a heartwarming drama about the love of cinema, and also about change. The film examines the sad truth about time, that we can never go back to what we once knew.

La Scala limited the number of ticket sales to two per person, but screenings still sold out.

The Scala is one of the three theatres along with Siam and Lido, and part of the Apex chain, which leases the land it occupies from Chulalongkorn University. Siam opened in 1966, Lido in 1968 and then the Scala opened on Dec 31, 1969, with the Thai premiere of the American Western movie The Undefeated.

While Scala was the last in the Apex theatre chain, it was the one made as beautifully as possible. The cinema's Art Deco, late modernism architecture has always been a distinctive feature. Upon entering, people notice the grand staircase leading to a giant chandelier. The theatre's name, Scala, is the Italian word for stairs.

The cinema's hall combines the arts of the East and West. The golden ceiling has curved concrete columns. The walls are inspired by various Asian cultures from Japan and China to Bali, India and Thailand. The single-screen cinema is located on the top floor of the building while the space of the ground floor is used for shops and restaurants.

The three cinemas gradually brought people to an area that had previously been quiet, but then grew into one of the most prosperous business locations in Thailand. Siam Square is very popular, especially among university students and teenagers. Although many modern theatres have since been built, the Scala still maintained its audience.

Now, the familiar yellow suits of the staff and the old-fashioned paper tickets are gone.

The sad looks on the faces of those lined up for the final screenings showed the theatre will be missed by many. But just as the characters in Cinema Paradiso learn, time marches on.

5. Which event happened first for Apex - a fire, an adaptation or renovations? …………….

7. What was the maximum number of possible screenings per day? …………….

Cinema Paradiso is a heartwarming story that …14… the importance of movie theatres. The film …15… the story of Toto, a young boy who …16… a friendship with Alfredo, the projectionist working in a movie theatre in his small Italian town. Toto …17… up, leaves town, falls in love and one day returns to his village as a successful film producer to …18… the funeral of Alfredo, the friend and …19… who taught him about the beauty of life.

Click "play" to listen to TEST YOURSELF: End of an era and "Download" to keep this file for educational purpose.