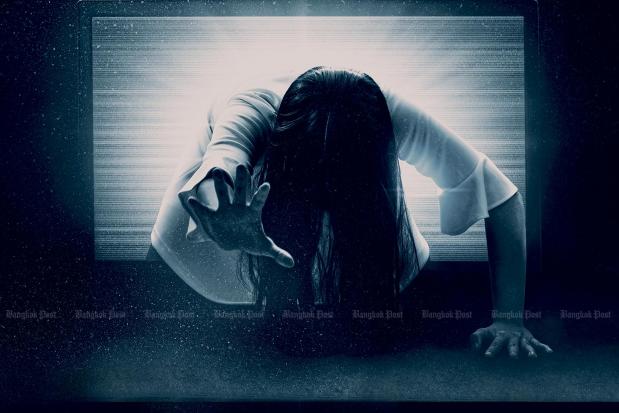 
Why are horror films so popular? And why do we find them scary? Many of us know that what’s happening on the screen isn't real, yet our hearts race as we watch a character get murdered or when a ghost jumps out to surprise us.

SCREAM THEN LAUGH
"The charm of horror stories is something that people and science today cannot explain," said film director Banjong Pisanthanakun. "In the cinema you’ll notice that when a very scary scene has passed, the audience may be laughing. We know it's fiction and nothing bad is going to happen to us, yet we still get to experience danger that is otherwise rare in our modern lives."

Shutter (2004) was one of Banjong's first films which was released during the wave of J-horror films that would find themselves endlessly remade and built upon (Ringu, Ju-On, One Missed Call). Hollywood's scary films from the early 2000s had plot twists like The Sixth Sense and The Others. Shutter follows a similar general story arc and feel despite its different country of origin.

The end scene when Tun realises that the ghost of his lover is sitting on his shoulders is extremely scary. Shutter paved the way for many more Thai films that came in the next few years. Modern horror in Thailand doesn't always rely on traditional folklore stories from the past, like Mae Nak (a vengeful female spirit), krasue (a woman's head with internal organs hanging down from the neck) and the tree spirits that live in the countryside. In Thai cinema, ghosts are almost always female.

The common belief in Southeast Asian culture is that spirits and ghosts are often around in our everyday lives. This has brought directors in Thailand lots of inspiration over the years. And ever since, Thailand has produced hundreds of horror movies, although those inspirations are running somewhat thin.

"Over the past few years, I think the local horror industry has been on the verge of decline. Even with new horror movies being released every year, only a few have done well or become financially successful. It's pointless to make a dozen or so movies that keep repeating the formula of Shutter," said Paween Purikitpanya, a director of spooky flicks like Phobia 2 and Body #19.

"Today the film industry has developed a lot in terms of production with better visual and sound effects, but this means nothing if you can't come up with fresh stories to tell first."


NEW HORROR
Even in Hollywood, horror films post-2010 mostly ran out of original ideas. Found-footage flicks are no longer exciting and exorcisms are old hat. Australian director James Wan has been pretty much the only filmmaker from the past decade that made a real impact in the mainstream horror scene. But even his hit films like Insidious and The Conjuring were similar to so many other haunted house movies from the 70s.

Recently, Paween is more interested in foreign movies such as Australian psychological horror The Babadook, and Iranian movie Under The Shadow.

"I also really like films by Jordan Peele like Get Out and Us. The guy expertly wove together horror while also examining the traumas of modern-day society and racism. These movies are perfect examples of the new direction the horror genre is going for."

Section 3: Read the following passage. Then, fill in the blanks with the correct words from the choices given.
"My favourites from the American …14… studio A24 studio are Hereditary and Midsommar. They serve as a …15… of how chilling atmospheric horror movies can be. Midsommar is the kind of film …16… that fear isn't limited to the dark anymore, but …17… daylight can also give you the creeps. …18… having lots of blood in it, this movie isn't about 'jumps and scares'. …19… about these films made me want to make horror movies again.”

Section 4: Find words that match the following definitions.
20. the quality of being pleasant or attractive ……………
21. the traditional beliefs, customs, and stories of a community ……………
22. the process of being mentally stimulated to do or feel something ……………
23. supernatural beings …………
24. removals of evil spirits from people ……………

Click "play" to listen to TEST YOURSELF: Fright night and "Download" to keep this file for educational purpose.