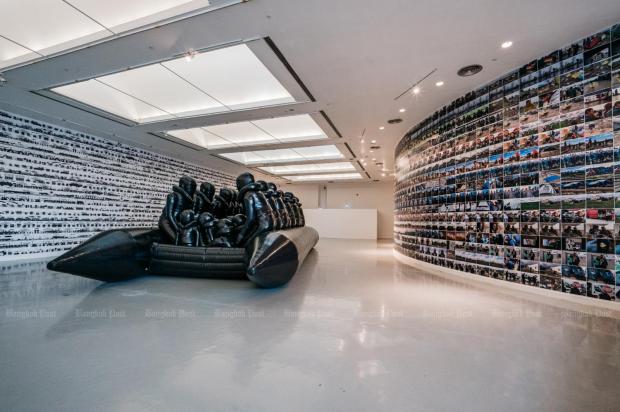 Read the following story by Pattarawadee Saengmanee from the Bangkok Post. Then, answer the questions that follow.


The Bangkok Art Biennale returns to the capital for the second time, aiming to help the Thai art scene during these tough times.

On view until Jan 31, the festival has the theme of "Escape Routes" to reflect several global issues such as climate change, political conflicts, cultural flow, gender equality and epidemics. The shows have paintings, visual games, art performances, sculptures, art installation and short videos.

Some 82 artists from 35 countries are showcasing a wide collection of 200 works at 10 Bangkok landmarks, including some temples, Museum Siam, Bangkok Art and Culture Centre and River City Bangkok.

"All these are the subjects and objects to the 'Escape Routes' theme, depending on how artists want to define and display their works," said Prof Apinan Poshyananda, chief executive and artistic director of Bangkok Art Biennale.

Here are some highlights at the two major venues located in downtown Bangkok.

The Bangkok Art and Culture Centre is home to 38 international and Thai artists with 86 works. Among them is artist-activist Ai Weiwei, who in 2011 was arrested and detained by Chinese authorities. In 2015, he settled in Berlin before relocating to England last year.

His art has focused on border disputes, political divisiveness and the rise of anti-immigration nationalism. At the main gallery on the 9th floor, he showcases the black inflatable boat titled ‘Law Of The Journey’ (2016), carrying refugee figures escaping from Bangladesh, Iraq, Syria, Turkey, Gaza and Mexico.


“'Law Of The Journey’ looks like an inflatable toy that you see in a playground. It's a family featuring females, males and kids. Ai Weiwei uses this technique to show the very serious subject of migration and escape," said Apinan.


In the next room, Peerachai "Samer" Patanapornchai draws secret codes on cardboard for his work, ‘Untitled’. For more than 20 years, he has been drawing on the streets of Bangkok, inviting pedestrians to understand his ideas.


"It took about three months to find Samer because he has dodged us everywhere. Sometimes, he's been taken away into a home because people feel that he's not stable. But in fact, Samer is a very normal person, who proves that not only an internationally-acclaimed artist can exhibit artwork,” Apinan said.

On the 8th floor, Lampu Kansanoh shows eight paintings capturing the way of life and the political situation both in Thailand and other countries. The painting ‘Please’ shows Prime Minister Gen Prayut Chan-o-cha standing on the ruins of the city.

Located on the 15th floor of The Parq, the 1,000m² art space is displaying 25 works from 16 artists. On view is a series of shiny metallic installations ‘Alice and Sphere’ by world-renowned artist Anish Kapoor. Made from stainless steel, his works create strange effects.

"He took inspiration from the classic novel Alice's Adventures In Wonderland, in which a girl falls through a rabbit hole into a fantasy world and tries to find an exit," Apinan said.

Performance artist Marina Abramovic has used virtual reality technology in creating ‘Rising’ (2018) to raise awareness of global warming. Players will find themselves stranded in the middle of the Arctic Ocean, while Abramovic is trapped in a glass tank and is struggling to escape when the water rises.


Bangkok Art Biennale 2020 continues until Jan 31 and works on the 9th floor of the BACC are on display until Nov 29. For more details, visit bkkartbiennale.com.

Section 3: Read the following passage. Then, fill in the blanks with the correct words from the choices given.
Film director Pen-ek Ratanaruang is …14… a new short film. It's a story of two young soldiers as …15… leave for the city to control a protest. Also on …16… is a collection of 17 tank-like sculptures created by veteran artist Wasinburee Supanichvoraparch. His work is …17… by the story of Augustus the Strong, who traded 600 of his …18… cavalrymen for 151 Chinese vases. This …19… what people do to achieve honour and power.

Section 4: Find words that match the following definitions.
20. to break free from control or from a place ……………
21. a person who has been forced to leave their country in order to escape war or natural disaster ……………
22. the movement of people or animals from one place to another ……………
23. avoided …………
24. the parts of something that remain after it has been severely damaged  ……………

Click "play" to listen to TEST YOURSELF: Art escapes and "Download" to keep this file for educational purpose.