TEST YOURSELF: Return to the void | Bangkok Post: learning 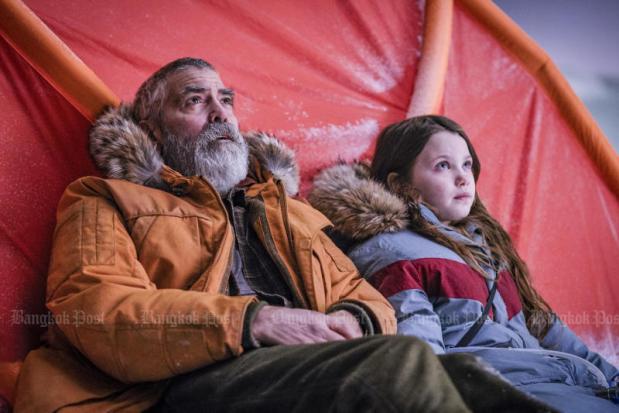 George Clooney is back in space


George Clooney is a true screen icon, Oscar-winning actor and a heartthrob for many. However, he’s also director and has been working behind the camera for nearly 20 years.

GOING HOME
Now, Clooney is set to launch his latest directorial effort as well as star in The Midnight Sky, a sci-fi drama, coming to Netflix on Dec 23.

The film follows Augustine Lofthouse (Clooney), a lone scientist in an isolated Arctic outpost, and Sully Rembshire (Felicity Jones) and her fellow astronauts in the Aether spacecraft as they try to return home. While the crew of Aether aren't aware of a mysterious global catastrophe taking place back on Earth, Augustine has to make a hazardous journey across a post-apocalyptic wasteland so he can stop Sully and the crew in time from returning to an uninhabitable Earth.

"When I got the script, the first thing I thought when I read it was that this is an intimate story about people trying to get home and people seeking redemption, especially since Augustine is filled with regret," said Clooney during a recent interview via Zoom.

The Midnight Sky isn't the first film about a space mission that Clooney has featured in. He's been involved with Steven Soderbergh's Solaris (2002) and Alfonso Cuarón's Oscar-winner Gravity (2013). The 59-year-old actor said that he had learned a lot from working with those two directors and that he was now ready to tackle outer space from the director's chair with this movie.

"I've learned many things from working in those films. For Alfonso, I particularly learned about action sequences and the physicality of being out in space. Meanwhile, with Steven, I learned everything I know about filmmaking that I know today," explained Clooney.

FREEZING COLD
Apart from outer space scenes, there were also outdoor scenes which were shot in Iceland and England with massive snowstorms.

"We were in Iceland in the first week of shooting and it was like -40 degrees C and it's 112kph wind gusts. My eyelids would freeze shut after about a little over a minute and two people would walk me back to a truck and take a blow dryer so that I could open my eyes before we'd go back out and shoot again," he said.

"But it was also really fun. We had to be prepared for those situations because we only had a certain amount of time. The light in the sky begins to emerge around 11.30am and it got dark again at 3pm. So, you had to be ready to go when the weather allowed for the Sun and clear skies to come through."

According to Clooney, there was a lot of tenderness while filming, both on and off the screen. One such warm moment was when Jones announced her pregnancy while filming, which led the director and the team to try to come up with unique ways to work her pregnancy into the script.

"Well, there was a lot of tenderness and it got more even more tender when Felicity announced that she was pregnant. First, it caused panic and suddenly the crew became much more of a family to protect Felicity and look out for the baby. All that stuff grew into this beautiful thing," he said.

Section 3: Read the following passage. Then, fill in the blanks with the correct words from the choices given.
“The little girl was such a …14… actress that she didn't have to act as she had only one line in the …15… film. She just stood there and she …16… look up and listen. So, I knew if the little girl was part of it, then it would be tender. If you didn't like the little girl, or if she …17… you somehow, then it …18… be. But she was …19… .”

Click "play" to listen to TEST YOURSELF: Return to the void and "Download" to keep this file for educational purpose.