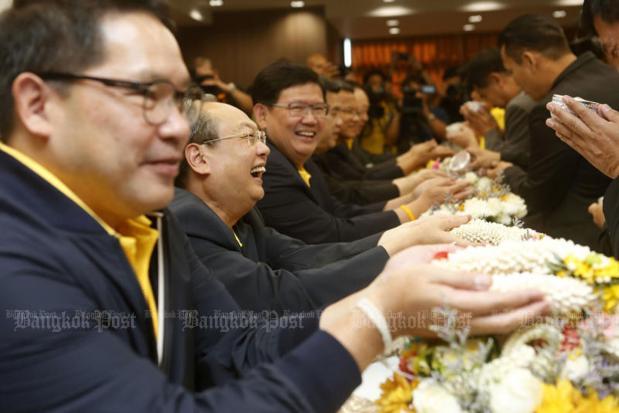 Members of the Palang Pracharath Party celebrate the Songkran festival in April. (Photo by Pattarapong Chatpattarasill)

Palang Pracharath Party (PPRP) is well on its way to leading the next government, joined by the Democrat and Bhumjaithai parties, according to military sources.

The bloc will likely include support from the New Economics Party (NEP) as well, the sources said.

The first was the resignation of Mingkwan Saengsuwan as NEP leader. His move was widely viewed as paving the way for the party, which previously pledged to forge an alliance with the Pheu Thai-led bloc, to switch sides.

However, it was widely speculated that Mr Mingkwan decided not to support his party siding with the PPRP because he had already announced he would not support Gen Prayut Chan-o-cha's returning as premier.

The other development was a meeting between Gen Prayut, his deputy Prawit Wongsuwon, Bhumjaithai leader Anutin Charnvirakul and Democrat secretary-general Chalermchai Sri-on at a military camp in Bangkok, according to the military sources.

They discussed coming together to set up a government with the PPRP as the main party, the sources said, adding that given the atmosphere of the meeting, the "deal" to form the next government is almost complete.

The Bhumjaithai and the Democrats this week reportedly forged a pact to increase their bargaining power in forming the governing coalition.

The Democrats are reportedly seeking the Interior, Commerce and the Energy portfolios while the Bhumjaithai Party is eyeing the Transport, Public Health, and Tourism and Sports ministries. These are seen as A-list ministries.

alliance : a coalition; an arrangement to work together - พันธมิตร

bloc : a group of people or a group of countries with the same aim - สมาชิกพรรคการเมือง

pact : an agreement between two or more people or organisations in which they promise to do something - ข้อสัญญา, ข้อตกลง

paving the way : making it possible for something to happen - กรุยทาง