Medical tourism could draw doctors out of an already struggling public health care system and endanger its very existence.

Some argue that medical tourism is a highly effective way of drawing higher spending tourists to Thailand for longer periods of time and generating income for the country.

Others argue that it could have a severe negative impact on the provision of health care services within the country, especially to poorer people.

This, of course, raises the question of why Thailand isn't able to educate and produce more doctors and health professionals and whether the process of meeting rigorous international standards of health care would not over time raise the overall standard of health care in Thailand for everyone, rich and poor alike.

In 2015 doctors from all ASEAN countries will be able to move freely across borders to work in other countries, so if Thailand does not provide them new opportunities other countries perhaps will (Read article).

In the past, the Bangkok Post has featured many articles on medical tourism as the idea has developed (See archive). 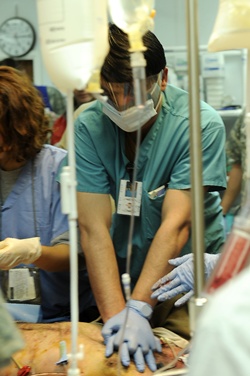 Health economists have criticised the government's medical hub strategy, saying it will worsen the financial position of state hospitals already on the verge of bankruptcy.

Ammar Siamwalla, of the Thailand Development and Research Institute, warned yesterday that the national health system could go bankrupt unless the strategy is scrapped.

The medical hub scheme was initiated by the Thaksin Shinawatra government in 2003.

Its aim is to attract foreign patients to high-end medical services and facilities on offer at private hospitals and to support hospitals in competing with other countries in the region such as Malaysia and Singapore.

Mr Ammar blasted the Abhisit Vejjajiva administration for pressing ahead with the scheme.

The medical hub project is the worst policy the government is going to implement.

"It draws doctors out of the system and sabotages public healthcare services struggling to make ends meet for the sake of paying medical professionals," he said during the Thailand Pharmaceutical Summit organised by the Pharmaceutical Research and Manufacturing Association.

The Department of Medical Services Support has drafted a five-year strategic plan which would spend 3 billion baht of taxpayer money to promote the country as a world class healthcare destination for foreign patients.

The plan is expected to be proposed to Public Health Minister Jurin Laksanavisit next week, according to the department's director-general Somchai Pinyopornpanich

The strategic plan also includes the promotion of tertiary care services in large state hospitals and medical schools to meet the standards of international and high-end private hospitals.

The plan says the medical hub scheme could make the country about 400 billion baht annually once it is completed.

However, Mr Ammar said state hospitals, especially general and regional hospitals, have been suffering financial woes for the past few years mainly due to the rapid increases in medical professionals' salaries

An estimated 9.87 billion baht was supposed to be earmarked for doctors and health staff at state hospitals nationwide to keep them in the system. Half of the total budget was subsidised by the National Health Security Office overseeing universal healthcare coverage for 46 million Thais.

By continuing with the medical hub policy, it will be harder for the government to catch up with the salary requirements, particularly to keep specialists and experienced doctors in the national health system," he warned.

Fiscal Policy Office director Naris Chaiyasut said there were three doctors for every 10,000 people in Thailand, which was relatively low compared with countries such as Vietnam and the Philippines which have six and 12 doctors per 10,000 people, respectively.

The medical expenses of 5 million civil servants and their families have also contributed to the financial shortage. About 63 billion baht has been earmarked for the civil servant programme in fiscal year 2011 and this is expected to increase to 90 billion baht in 2016.

medical tourism -  term initially coined by travel agencies and the mass media to describe the rapidly-growing practice of traveling across international borders to obtain health care (See Wikipedia)
hub - the central or main part of something where there is most activity จุดศูนย์กลาง
medical hub - an international center where people come for healthcare services (high standard at low cost)
health professional - a doctor, nurse, or specially trained person who provides treatment (See list)
National Health Commission (NHC) - In 2007, the National Health Act created the National Health Commission (NHC) "in order to support the development of healthy public policies in cooperation with various sectors in society. The commission also provides helpful advices to a government and state agencies at both national and local levels to take the people’s well-being into consideration." (See website)
health economics - "a branch of economics concerned with issues related to scarcity in the allocation of health and health care. In broad terms, health economists study the functioning of the health care system and the private and social causes of health-affecting behaviors such as smoking" (See Wikipedia)
health economists - experts in health economics

strive - try very hard to do or become something, make a great effort or struggle to do something  พยายามอย่างหนัก, บากบั่น, อุตสาหะ
civil service - the group of all employees who work for the government for their whole career, usually chosen fairly by competitive exam, and provided with protection from losing their job through political influence and corruption (job security) (See Wikipedia) strategy - a plan to achieve a goal over a longer period of time (longer than a "tactic")
state - government รัฐ
on the verge of Y - nearly, to almost be in state Y  เกือบจะ, จวนจะ, จวนเจียน, แทบจะ, เกือบถึง
financial position - the money situation of a company; income and expenses, assets and cash vs. debt (good financial position needed for day-to-day operation and continued existence of company)
worsen the financial position - create a babd money situation for the company (that makes operation and continued existence difficult)
bankruptcy - when a company does not have enough money to pay their debts and continue in business, so its assets are sold off to pay off debts (See Wikipedia)
national health system - the government system of providing medical help and treatment for every Thai person for free or low cost
bankrupt - when business is bad, debts cannot be paid, and business cannot operate anymore (See Wikipedia)
scrapped - cancelled, ended, discarded, decided not to continue  ยุติแผนที่วางไว้
scheme - a plan that is developed by a government or large organisation in order to provide a particular service for people แผนการ โครงการ
initiated - created; started ริเริ่มโดย

aim - purpose; goal เป้าหมาย จุดมุ่งหมาย
attract - to cause someone to be interested in something ดึงดูดความสนใจ
high-end - high quality and expensive
facilities - the buildings, equipment and services provided for a particular purpose สิ่งอำนวยความสะดวก
support - help, by giving money, for example สนับสนุน
blasted - criticised severely โดนว่า
administration - one government that a country has for a period of time
pressing ahead - goiwing forward, continuing a project
worst - most + bad
policy - a set of plans or action agreed on by a government, political party or business, a plan of action to guide decisions and achieve outcomes (See Wikipedia) นโยบาย
implement - put a plan into action, make a plan work, make something such as an idea, plan, system or law start to work and be used นำมาใช้, นำ แผนหรือนโยบายมาปฏิบัติ

draw out - pull out, take out of
sabotage - when one side of a fight or war damages the property (equipment, facilities) of the other side (enemy) การบ่อนทำลาย
healthcare - the treatment and prevention of diseases and other medical problems
public healthcare services - healthcare and treatment provided by the government
struggling - having serious difficulties มีความยุ่งยาก
make ends meet - make or earn enough money to survive and continue operating,
for the sake of - for the purpose of

drafted - to write up an official document
strategic - done with a special plan to achieve long term goals
five-year strategic plan - a plan to achieve important goals over the next five years
destination - the place that someone is going to, the place where a passenger or goods are going ปลายทาง , จุดหมายปลายทาง
expected - believe will happen คาดว่า (จะเกิดขึ้น)
proposed - suggested (but not yet chosen or decided upon), presented as a possible project
primary health care - first contact healthcare, the first health care that a patient receives for their problem, if the problem is bad then the patient is sent to a specialist for further treatment (referral), primary health care providers ensure "coordination of care and continuity over time"
secondary healthcare - "treatment by specialists to whom a patient has been referred by primary care providers"
tertiary health care - a specialized and highly technical level of healthcare in sophisticated large research and teaching hospitals with "specialized intensive care units, advanced diagnostic support services, and highly specialized personnel" (Source: thefreedictionary.com)
tertiary care services - same as "tertiary healthcare"
standards - a level of quality or achievement that must be passed to be acceptable มาตรฐาน
annually - happening every year ทุกๆปีด

suffering - physical or mental pain or problems ความทุกข์ทรมาน
woes - great problems or troubles ความเสียใจ, ความทุกข์ร้อน
suffering financial woes - experiencing bad problems because you have no money
rapid - happening quickly อย่างรวดเร็ว
earmarked - use for a special purpose or programme
staff - workers, employees พนักงาน
nationwide - throughout a whole country ทั่วทั้งประเทศ
budget - the amounts of money that an organisation has available to spend on different things during a period งบประมาณ (See Wikipedia)
subsidised - paid part of the cost of something ให้ความช่วยเหลือด้านการเงิน
overseeing - managing, checking to see that it operates properly and nothing goes wrong
universal - involving everyone ทั่วไป
universal healthcare coverage - a government system for providing every person with medical care and treatment

catch up - when going too slow, going fast to reach your goal ตามไปถึงพอดี, ตามทัน, ตามถึง
salary requirements - the income or money that a certain kind of skilled employee demands for their services
specialists - medical specialists, doctors who have been specially trained to treat certain kinds of diseases including Surgery, Anesthesiology, Pediatrics (children), Obstetrics (mothers during pregnancy and birth), Gynecology (women), Cardiology (heart), Dermatology (skin) (See Wikipedia)
salary - a fixed amount of money that you earn each month or year from your job เงินเดือน
civil servant - permanent government workers, work for the government for their whole career (job protected from political inteference)
earmark - reserving to use of some money for a special purpose \
shortage - when there is not enough of something การขาดแคลน
financial shortage - not having enough money (to do what you need to do)
fiscal - connected with the government budget, i.e., public money เกี่ยวกับงบประมาณ
fiscal year - the year on the calendar used by companies and government for planning and budgeting spending, and then reporting on financial performance over the year