Rural Thais have been moving their children to larger schools with higher educational standards which are also less expensive to run for the last 20 years. Is it time to merge some rural schools in remote areas?

Small schools will need help to stay open: Directors told to adapt if they want to survive by Sirikul Bunnag 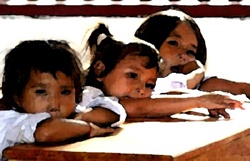 Education authorities fear many small primary and secondary schools in outlying areas will be forced to close as their annual intake of pupils continues to dwindle.

The secretary-general of the Office of the Basic Education Commission, Chinnaphat Phumrat, said yesterday it might be necessary to increase the budgets of these schools and give directors a free hand to develop policies to attract pupils.

Mr Chinnaphat said the number of schools with fewer than 120 pupils had risen dramatically since 1993 from 10,741 to 14,056 last year. That means almost half of the schools under Obec's supervision - about 45% - were regarded as small schools, many of them struggling to keep within their budgets.

Mr Chinnaphat said one reason for fewer enrolments was the decreasing birthrate around the country. Better transport systems had also made it easier for parents to send their children to urban schools which they believe have higher teaching standards.

"So these countryside schools can only sit and watch their situation deteriorate," he said. "If the problem is left unsolved, investment in state education will be affected."

Research has also found the learning capabilities of students varied with the size of a school. Students in schools with fewer than 495 students tend to have lower learning efficiency than those in schools with between 495 and 2,000 students.

Schools with fewer than 300 pupils encountered higher administrative costs than those with a larger number.

Mr Chinnaphat said Obec planned to solve the problem of falling enrolments at small schools by working closely with school directors who have "a strong urge" to improve standards.

They will get additional funding and will be allowed to freely design their own development plans, he said.

Despite concern over their plight, Mr Chinnaphat said he was optimistic about improving small schools.

Two years ago, he said, Phayuha Wittayakan school in Nakhon Sawan, which had seen its enrolment drop to 90, joined up with a nearby school facing a similar problem. They successfully merged classes for students at the same level.

Mr Chinnaphat warned school directors who ignored the problem that Obec would not shut down their schools but "let society decide whether the schools should be closed."

viability - ability to survive, continue to exist ความอยู่รอดได้
remote - distant, far away from where most people live, outlying areas ไกล

Office of the Basic Education Commission (OBEC) - the government organization in Thailand in charge of measuring the quality of education and improving it (See website)
give a free hand - allow great freedom of action, let them do what they need to do, with few restrictions
attract - to cause someone to be interested in something ดึงดูดความสนใจ

reason - an explanation of an event, why an event happened เหตุ ; เหตุผล ; สาเหตุ
enrol (verb) - officially add your name to the list of people attending or going to a school (in US: enroll)
enrolments (noun) - the number of people signing up to go to a school
birthrate - number of babies born in the country every year
transport - to move people or things from one place to another ขนส่ง
urban - in a city or town ในเมือง
standards - an acceptable level of quality or achievement มาตรฐาน
deteriorate - to become worse เลวร้ายลง
investment - taking your money and putting it into projects to make a profit, earn interest or create some benefit for the people (in the case of government projects)
state - government รัฐ

efficiency - doing a lot with a little resources; waste little time, energy and resources in doing a task (minimize time, energy and resources in performing a task) (See glossary) การทำงานอย่างมีประสิทธิภาพ คุ้มค่าเวลาและใช้พลังงานหรือต้นทุนในการผลิตน้อย เพื่อให้ได้ผลผลิตมาก
encountered - experienced, especially something unpleasant เผชิญหน้า
urge - trying to make something happen
improve - to make better ทำให้ดีขึ้น
funding - money given for a particular purpose การให้เงินสนับสนุน
development - the gradual growth and formation of something

concern - a worry ความกังวล
plight - an difficult situation full of problems สภาพเลวร้าย
optimistic - expecting good things to happen in the future โดยคาดหวังสิ่งที่ดี, มองโลกในแง่ดี
merged - joined together into one thing