Experts in the UK are working with Thailand's food industry to prevent contamination of animal food products that can cause food poisoning. 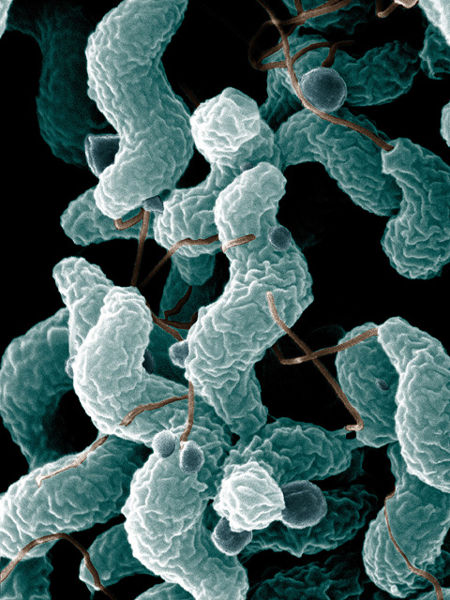 The photo above is a microscopic view of the campylobacter bacteria responsible for food poisoning discussed in today's article.

Today's article is full of English vocabulary that will be useful for students aiming at a career in health professions such as nursing and medicine.

FOOD SAFETY: Better safe than sorry, EVERY POSSIBLE PRECAUTION SHOULD BE TAKEN WHEN WHAT WE EAT IS PUT AT RISK BY Anjira Assavanonda

The notification by the European Union food-safety authorities that certain vegetables imported from Thailand were contaminated with insecticides has prompted the Thai authorities to step up measures to protect our food industry. The Agriculture Ministry is going to suspend the export of 16 vegetables to the EU next month, including basil, aubergines and chillies.

However, more probably needs to be done when it comes to the issue of food safety, as it is not only vegetables which are exposed to such contamination. The collaboration between the UK and the Thai food industry is now focusing on the safety of certain animal food products that are likely to be contaminated with bacteria that cause food poisoning.

Tom Humphrey, professorial fellow in Food Safety and Science Director, National Centre for Zoonosis Research, University of Liverpool, pointed to two food-borne zoonoses, salmonella and campylobacter, which are a major concern in the UK and worldwide.

"Zoonosis is defined as a disease that we get from animals. About 60% of all infections are zoonoses - Sars, avian flu, campylobacter, salmonella; we catch them all from animals, either directly or indirectly from food," said Humphrey.

People infected with salmonella and campylobacter may suffer from abdominal pain and diarrhoea.

Salmonella is found in both chicken meat and eggs while campylobacter is found in chickens.

In Europe and America, campylo-bacter bacteria is the second leading cause of digestive-system diseases, after salmonella, and has been closely monitored.

According to Humphrey, the animal in Europe that most often contracts zoonosis is the chicken, but how it does so is not fully understood.

In Thailand, there are no complete statistics on the epidemiology of the diseases, but studies between 1990 and 1993 found a continuing increase in the number of patients infected with salmonella, rising from 1.33% to 16.98% within a four-year period.

Also, during the same period, the presence of salmonella bacteria in raw chicken meat was found to have increased dramatically from 1.4% in 1990 to 16.75% in 1993

Nipa Chokesajjawatee, a researcher at the National Centre for Genetic Engineering and Biotechnology, explained that salmonella bacteria are generally found in the environment and in raw food. Humans can contract salmonella from eating undercooked food, and the bacteria in that food must be in large amounts to cause food poisoning. Eggs from infected chickens can also be contaminated with salmonella, but the chances are not quite as high. Nipa cited a study which found that one in every 200 eggs laid by an infected chicken will be contaminated with the organism.

She noted that if Thailand would like to be able to export raw chicken to Europe, it had to come up with measures to stop Thai chickens from getting infected with both campylobacter and salmonella. More research needs to be conducted in this area.

Humphrey meanwhile responded : "Because Thailand is seen as an important future food-supply source for Europe and the UK, it is important for the Thai industry to learn to protect its food animals from infection so that they don't pass the infection on to people." ...

(Source: Bangkok Post, FOOD SAFETY, Better safe than sorry, EVERY POSSIBLE PRECAUTION SHOULD BE TAKEN WHEN WHAT WE EAT IS PUT AT RISK, 25/01/2011, Anjira Assavanonda, link)


collaboration - working together with others to solve problems and achieve goals

better safe than sorry - a saying that means it is better to protect yourself, if you don't you will suffer and be "sorry" precaution - some action taken to protect against some danger, harm or trouble

notify (verb) - giving information to the public, telling the public about something, making announcemnt แจ้งความ
notification (noun) - ใบแจ้งความ, การแจ้ง, ประกาศ, ข้อความที่แจ้งให้ทราบทั่วกัน, การบอกกล่าว, การร้องบอกให้ผู้อื่นเป็นพยานรับรู้ไว้
authorities - government officials, the police or people in official organisations who have the legal power to make people obey laws or rules เจ้าหน้าที่ (ตำรวจ หรือผู้มีอำนาจ)
contaminated - made dirty, polluted or poisonous by the addition of a chemical, waste or infection
measures - actions done to solve a problem มาตราการ
suspend - to stop for a period of time ยกเลิกชั่วคราว, ระงับชั่วคราว, หยุดชั่วคราว

issue - a problem that needs to be considered, a subject that people discuss or argue about ประเด็น

food safety - a scientific discipline that studies the handling, preparation, and storage of food to prevent food from carying illness (See Wikipedia) ความปลอดภัยในเรื่องการอาหารนับแต่กระบวนการการผลิต ขนส่ง การจัดเก็บและจัดจำหน่าย
exposed - not protected from something ได้รับ ได้สัมผัส (แดด หรือสารพิษ เป็นต้น)
contamination - made dirty and dangerous to use or eat after exposure to dirt, germs, chermicals, or radiation
collaboration - when people work together to achieve a goal
food poisoning - "any illness resulting from the consumption of contaminated food,pathogenic bacteria, viruses, or parasites that contaminate food,also known as "foodborne illness" (See Wikipedia)

fellow - used for talking about people who are similar to you or are in the same situation เพื่อนร่วมชะตากรรม
pointed - direct, in a way that shows you are annoyed or do not agree with something ที่เด่นชัด
borne - carried ถือ หรือนำไป (อัญเชิญ ประดิษฐาน)

salmonella - a bacterial infection that causes food poisoning with "diarrhea, fever, vomiting, and abdominal cramps, 12 to 72 hours after infection. In most cases, the illness lasts 3 to 7 days; most affected persons recover without treatment" (See Google Definitions and Wikipedia)
campylobacter - a bacteria which is one of the main causes of food poisoning and diarrhea illness in the world, infections can also trigger arthritis, the bacteria lives in the intestines of healthy birds, and most raw poultry meat has Campylobacter on it (See Wikipedia and Google Definitions and pronunciation)
concern - a worry ความกังวล

infection - the uncontrolled growth of harmful microorganisms in some "host" such an animal or a human (See Wikipedia)
microorganism - a living thing (organism) that is to small to be seen by the human eye (without the aid of a microcrope) includes bacteria, protozoans, viruses, microscopic algae and some types of fungi (See Wikipedia) host - some living (organism) that allows another living thing to live inside of it (a parasite) providing it nourishment and shelter (this could be a virus, a bacterium, a protozoan, or a fungus) (See Wikipedia)
Sars - Severe Acute Respiratory Syndrome, a severe form of pneumonia caused by a virus that appeared in outbreaks in 2003, originated in mainland China in 2003, characterized by fever and coughing or difficulty breathing or hypoxia, can be fatal (See Wikipedia and Google Definitions)
avian - relating to birds
avian flu - also known as "bird flu", a danger virus transmitted to humans by birds (See Wikipedia and Social effects of H51N, biosecurity against Avian Flu)  ไข้หวัดนก

indirectly - not directly (passing from a to b and then to c, instead of directly from a to b)
infected - having a disease transmitted from someone else ซึ่งติดเชื้อ
suffer - to experience physical or mental pain
abdominal - involving the front part of your body below your waist ช่องท้อง (ช่องพระนาภี)

public health - "the science and art of preventing disease, prolonging life and promoting health through the organized efforts and informed choices of society, organizations, public and private, communities and individuals" (See Wikipedia)
monitored - watch carefully what is happening, to make sure everything goes well เฝ้าระวัง
digestive-system - the biological system in the that mechanically and chemically breaks down food into smaller components that can be absorbed into the blood stream to provide nutrients to the body (See Wikipedia)
contracts - grows smaller, shrinks

statistics - facts about something, described by counting them สถิติ
epidemiology - the science dealing with the spread of diseases through populations and their control (See Wikipedia)
presence - when something is in something or at place
raw - not cooked
dramatically - in a big way อย่างใหญ่หลวง

environment - the natural world of land, sea, plants, and animals
contract - to become infected with a disease ติดเชื้อ
cited - mentioned (to support a point you are making or arguing) กล่าวถึง
source - the place or person something comes from or starts at, or the cause of something ต้นกำเนิด, แหล่งกำเนิด