Food carts are convenient and cheap, and also safe if sanitation regulations are regularly enforced. 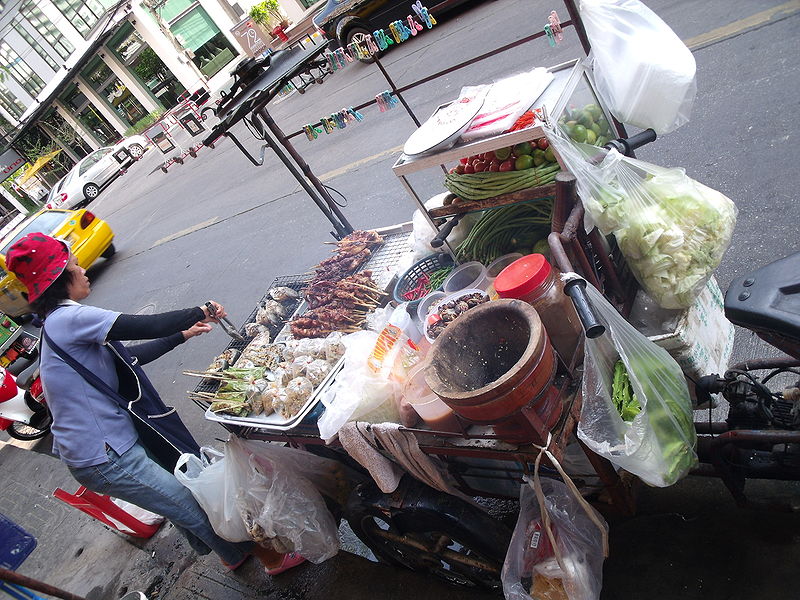 EDITORIAL: Poison in the food chain

The European Union is not the only community to express concern over Thailand's contamination of food through the overuse of toxic pesticides. Food safety and hygiene have also become issues at home and the net is closing on those who sell contaminated meat, vegetables and substandard fruit. Consumers are more health-conscious nowadays and have rightly served notice that they expect high standards of cleanliness to be maintained.

This was illustrated by Public Health Minister Jurin Laksanavisit on Wednesday, when he took offending vendors to task for excessively recycling cooking oil. He warned that using the same oil more than twice, even if filtered, could create serious health risks, of which there are currently no shortage. The US Centers for Disease Control in Atlanta links over 200 illnesses to food poisoning, many of them life-threatening.

In general, though, the outcry over the use of toxic pesticides has taken some of the heat off the much-maligned street vendors, who have been shown to be not the only ones responsible if contaminated food is found at their stalls. But that does not absolve them completely because there are other contaminants, some caused by a lack of basic food hygiene. If that is the case, they will get the blame.

Vendors are supposed to be registered, but not all are, and to maintain high standards of food safety. To their credit, a great many do because their business relies on repeat customers; roadside diners who have been made ill are not likely to return. Fresh food markets and street vendors are an integral part of city life and our culture but fight a daily battle against dirt, dust, vehicle fumes, flies and other pollutants. They are also the target of justified complaints from pedestrians who are forced to walk around them in the roadway because their street stalls are blocking the pavements.

The Bangkok Metropolitan Administration and its municipal inspectors have long had a love-hate relationship with vendors and there have been constant threats to clear them from the streets because of the nuisance factor. That would be a sad day because street vendors perform an important public service and also help to keep inflation in check. They are part of what makes Bangkok unique.

Incentive programmes and stiff fines already exist for non-compliance with sanitary regulations, but there is still room for improvement. For a start there must be full enforcement of the ban on the use of borax to redden meat and colouring chemicals to improve the appearance of fruit. More frequent health inspections are necessary to check on levels of coliform bacteria and to ensure that noodles are fit for consumption and do not contain an excess of fungal aflatoxins.

First, though, priority must be given to regulation of pesticides to preserve both our health and vegetable export markets. The backlash from the EU should not come as a surprise to the Agriculture and Cooperatives Ministry, which two years ago was trying to prevent farmers from using traditional herbs as "natural" pesticides, by nonsensically declaring them to be dangerous substances. The ministry is surely aware of the survey last year by four universities and the Foundation for Consumers which provided evidence of the extent of contamination taking place. And that while the 42,089 tonnes of pesticides imported in 1997 were then considered sufficient, for some reason it became necessary to import 137,594 tonnes in 2009.

Received wisdom has it that we are what we eat. In light of this month's revelations about hazardous chemicals in the food chain, that is an alarming thought.

food chain - 1. for animals and plants the sequence of relationships in which one living thing eats another for its food (See Wikipedia), 2. for humans means all businesses and processes involved in producing ood from raw materials, also known as "food system" (See Wikipedia)

community - the people living in one particular area (here: a whole group of countries)
concern - a worry ความกังวล

contamination (noun) - made dirty and dangerous to use or eat after exposure to dirt, germs, chermicals, infection or radiation
contaminated (adjective)
contaminants (noun)

toxic - poisonous and harmful to people, animals or the environment เป็นพิษ
food safety - a scientific discipline that studies the handling, preparation, and storage of food to prevent food from carying illness (See Wikipedia) ความปลอดภัยในเรื่องการอาหารนับแต่กระบวนการการผลิต ขนส่ง การจัดเก็บและจัดจำหน่าย

pesticide - poisons that will insects that can cause damage to plants (See Wikipedia)
hygiene - the degree to which people keep themselves or their environment clean, especially to prevent disease สุขลักษณะ
issues - subjects that need to be considered ประเด็น
the net is closing on - law will soon be enforced (they will no longer get away with something bad they have been doing, like a fish net catching fish)

substandard - not as good as you would normally expect, or not good enough to be accepted, quality below quality requirements set by government ต่ำกว่ามาตราฐาน
conscious - aware; noticing that something exists or is happening and realising that it is important ความสำนึก ความตระหนักถึง
health-conscious - people who are aware that their health is important and take steps to keep in good health
notice - information or warning หมายเตือ
served notice - give a warning and information to the public
standards - an acceptable level of quality or achievement มาตรฐาน
maintained - kept at the same level (not allowed to increase or decrease)

public health - "the science and art of preventing disease, prolonging life and promoting health through the organized efforts and informed choices of society, organizations, public and private, communities and individuals" (See Wikipedia)
epidemiology - the science dealing with the spread of diseases through populations and their control (See Wikipedia)
Centers for Disease Control (CDC) -  important US government agency in the area of public health and epidemiology, " works to protect public health and safety by providing information to enhance health decisions, focuses national attention on developing and applying disease prevention and control (especially infectious diseases), environmental health, occupational safety and health, health promotion, injury prevention and education activities designed to improve the health of the people of the United States" (See Wikipedia and website)

recycling - using again
vendors - people who sell things, e.g., food or newspapers, usually outside on the street พ่อค้าแม่่ค้าหาบแร่แผงลอย
filter (verb) - to remove something from a liquid by pouring it through a filter
shortage - when there is not enough of something การขาดแคลน
links - connections ความเชื่อมโยงกัน

food poisoning - "any illness resulting from the consumption of contaminated food,pathogenic bacteria, viruses, or parasites that contaminate food,also known as "foodborne illness" (See Wikipedia)
life-threatening - could die from the disease (condition, threat, etc...)

outcry - a strong expression of anger and disapproval about something, made by a group of people or by the public การคัดค้านอย่างรุนแรง
taken some of the heat off - reduces pressure (don't receive as much criticism as they used to)
much-maligned - people criticize and find-fault with (maybe even too much)
stalls - large tables or small shops with an open front from which goods are sold in a public place แผงขายของ
absolve - to say that someone is free of blame or responsibility, forgive
lack - does not have ขาดแคลน

registered - officially recorded as a business with the government (and given permission to operate)
maintain - to keep รักษา
to their credit,... - this is a good thing that they do, something worthy of praise...
repeat customers - customers that come to a shop regularly and often to buy things
integral - necessary and important ซึ่งเป็นส่วนจำเป็น
vehicle - a machine that you travel in or on, especially one with an engine that travels on roads, e.g., a car, bus, van, truck, etc. ยานพาหนะ
vehicle fumes - air pollution that comes out of the back of cars and trucks

X was the target of Y  - Y was directed at X
justified - reasonable, there was a good reason for it happening
complaints - when people say there is something wrong and they want it changed
pedestrians - people who are walking, especially in an area where vehicles go คนเดินถนน
street stalls - small stores on the sidewalks next to roads, selling something like food

municipal - of a town, city or district with its own local government เทศบาล
love-hate relationship - a situation in which sometimes you hate them and sometimes you love them
constant - continuous; all the time ต่อเนื่อง
clear them from the streets - remove them from the sidewalks (where the vendors run their businesses)
factor - a fact or situation which influences the result of something ปัจจัย
inflation - the level of prices rising in the economy as a whole (See Wikipedia and The Economist glossary) ภาวะเงินเฟ้อ
unique - very special and unusual  ที่มีลักษณะพิเศษ เป็นเอกลักษณ์

incentive - a reward given if people act or behave in a certain way
fine - forced to pay money as punishment, after breaking a rule or law stiff fines - very big fines
compliance - following a rule or law
non-compliance - not following a rule or law
sanitary - keeping things clean (removing garbage, removing waste water, keeping water supply clean)
regulations - official rules that control the way that things are done ระเบียบปฏิบัติ, ระเบียบ ข้อบังคับ
improvement - when something gets better or when you make it better การปรับปรุง, การทำให้ดีขึ้น
still room for improvement - there are still improvements that can be made, that are possible

coliform bacteria - a group of bacteria that if present in water, shows that disease causing organisms (pathogens) may exist, these indicator organisms and are not harmful themselves, also an indicator of human fecal contamination (See Wikipedia and Google Definitions)
ensure - to make certain that something happens or is done รับรอง ให้ความมั่นใจ
consumption - using, eating or drinking something การบริโภค
fit for consumption - clean and won't cause harm or food poisoning if eaten
excess - greater than is usual; too much of something มากเกินปริมาณที่พอดี

priority - something important that must be done first สี่งที่สำคัญเป็นลำดับแรก
regulation - official rules that control an activity or whole industry ระเบียบข้อบังคับ, กฎระเบียบ
preserve - to keep something as it is, especially in order to prevent it from being damaged or destroyed ทำให้คงอยู่, สงวน
backlash - a strong negative and often angry reaction to something that has happened การสะท้อนกลับอย่างรุนแรง
traditional - things (clothes, music, customs, etc.) that have been part of a country or society for a long time
nonsense (noun) - not true, sensible or logical
nonsensically (adverb)

ministry - a government department dealing with an area of activity กระทรวง
aware - knowing that something exists, or having knowledge or experience of a particular thing ทราบ
survey - gathering information about what people think about different subjects (public opionion) by asking large numbers of people questions and counting their answers, and then using statistics, graphs, and tables to present results (See Wikipedia)
survey - presents a summary and sampling of a large subject การสำรวจความเห็น
evidence - information that shows that something actually did happen or actually is true หลักฐาน
extent - size ขนาด
sufficient - enough พอเพียง
reason - an explanation of an event, why an event happened เหตุ ; เหตุผล ; สาเหตุ
import - to buy or bring in products from another country นำเข้า

wisdom - knowledge gained over a long period of time from experience
received wisdom  - facts that are believed to be correct by large numbers of people, widely accepted, commonly accepted facts revelations - surprising new things that have been revealed to the public (the public knows or has learnt something new)
hazardous - dangerous, can cause harm, especially to people's health or safety
alarming - makes you worry, makes you nervous