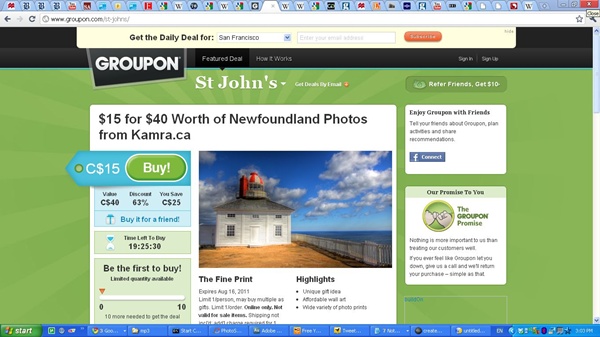 This an extract from a larger article. The whole article can be found here.

What if I told you that the couple sitting next to you at the restaurant you went to last Saturday night got a 60% discount on their bill? That the same couple treated themselves to his and her Swedish massages on Wednesday for the price of a single treatment and that they plan to grab a coffee and puff pastry before work today for 29 baht each? Envious? Naturally.

Welcome to the world of collective buying...

...Take Groupon. The Chicago-based firm, only two years old, has now expanded into more than 300 markets in North America, Europe, Asia and South America and amassed over 35 million registered users...

...the savings delivered to users often peak at over 70%, returns for Groupon have been even more stratospheric. The company - which takes a cut on every deal sealed - recently turned down a $6 billion buy-out offer from search giant Google and, according to the Wall Street Journal, "is on pace to make $1 billion [30.8 billion baht] in sales faster than any other business, ever."..

...The world of collective buying, an industry still in its infancy, does have teething problems. For one, the goods and services featured tend to be luxury items. You won't see cheap groceries or discounted phone bills too often; it's a rare thing for a company to offer something you actually need.

Worse still is the situation when thousands decide they need the deal for that day - and desperately. Tokyo's Bird Cafe faced just that dilemma earlier this year when the small restaurant was swamped by Groupon Japan shoppers buying osechi sets - a traditional New Year's meal. Many of the 500 sets sold arrived late, while others were said to be in "terrible condition". Groupon CEO Andrew Mason apologised, saying, "because the popularity of Groupon Japan has grown so quickly it took us off guard.

The success of Groupon and other copycat sites has helped spawn a clutch of local deals site here in Thailand too. Dealdidi.com, Tiktokthai.com and Kreeed.com are all delivering their users significant savings daily on yoga classes, Italian restaurant meals and skin treatment packages. Meanwhile, Thaicitydeals.com now operates in a number of Thai cities including Bangkok, Chiang Mai and Pattaya, offering deals on everything from indoor football field hire to international phone cards.

Gael Ovide-Etienne, co-founder and CEO at Thaicitydeals.com, says the Thai market is perfect for collective buying. Not only do Thai people have up to three times more Facebook friends than users in Western countries, "they love sharing. There's no doubt Thai people enjoy discovering new restaurants," he said. "Especially with a deep discount."

You have been warned. Now go and get that coffee, massage and sushi.

collective - involving all the members of a group ที่เป็นจำนวนมาก ที่เป็นกลุ่มใหญ่
collective buying - collective buying power, when a large group of people buy things together and receive big discounts (See Wikipedia)

his and her Swedish massages - means: buying one for the wife (or girlfriend) and another for the husband (or boyfriend)
treatment - the process of providing medical care การรักษา

puff pastry - a type of pastry or crust made of a large number of successive layers of dough (flour, eggs, water) and butter. When baked, puff pastry becomes flaky and light (croissants for example are simply puff pastry rolls) (See Wikipedia and Google Definitions)
grab - take something quickly with the hand (here means: get)
envy (noun) - the unhappy feeling when you really want something that belongs to another person ความอิจฉา, ความริษยา,ความอิจฉาตาร้อน, เดือดร้อนที่เห็นเขาได้ดี, ไม่อยากให้คนอื่นได้ดี
envious (adjective)
naturally, Y - as most people would understand and expect, Y is true or happens

firm - a company บริษัท
Chicago-based firm - a company with headquarters and operations in the city of Chicago in the US
amassed - gather and collect together a lot in one place
registered - officially recorded (here: as a member of a website)

peak - the time when something is at its highest or greatest level ช่วงเวลาที่พบมากที่สุด
returns - the money that a company makes from an investment, profit
stratospheric - very high
takes a cut - receives part of the money made by a business
buy-out - pay money to the other owners of a business so that you can own the whole business
search - to look somewhere carefully in order to find something ค้นหา (here: using the Google "search engine")
search engine - a website (like Google, Yahoo or Bing) that can be used to find articles or content on other websites (See Wikipedia)
pace - the speed at which something happens ท่างทำนอง ย่างก้าว จังหวะ ที่สิ่งต่างๆ ดำเนินไป

infancy - the period of time when a person is a small baby วัยทารก, ความเป็นทารก, วัยเริ่มต้น
teething - the process of a baby getting its first teeth การงอกของฟัน
teething problems - problems that you have when you first start to do something ปัญหาในระยะแรกของการเริ่มทำสิ่งหนึ่งสิ่งใด
featured - included someone or something as an important part มีบทบาทสำคัญใน
tend - to be likely to behave in a particular way or have a particular characteristic มักจะ
luxury - the best and most expensive of something ที่หรูหรา
discounted - (of a price or rate) reduced ชักส่วนลด,ทำให้น้อยลง
bills - money owed to others that must be paid quickly
rare - not happening very often, uncommon, unusual หาได้ยาก

desperately - feeling or showing that you have little hope and are ready to do anything without worrying about danger to yourself or others ทิ้งไพ่ตาย อย่างสุดชีวิต อย่างเอาเป็นเอาตาย
swamped - having too many problem or too much work to deal with at one time ที่มีปัญหามากเกินรับไหว
osechi  - traditional Japanese New Year's foods packaged in little boxes containing a wide variety of foods (See Wikipedia)
traditional - things (clothes, music, customs, etc.) that have been part of a country or society for a long time
condition - the physical state of a person or thing, whether the thing is broken or the person is healthy สภาพ, ภาวะ, ความเป็นเองตามธรรมดาของมัน, ลักษณะในตัวเอง
in terrible condition - when a thing is broken or in bad repair, when a person is not healthy
apologise - to tell a person that you feel bad about (sorry) for doing something wrong or causing a problem ขอโทษ, ขอรับผิด, ขออภัย, ขอประทานโทษ, แสดงความเสียใจ, แก้ต่าง, แก้ตัว
took us off guard - surprised when something happened (was not expecting it)

copycat - similar to something else and considered to be a copy of it เลียนแบบ
spawn - to create ก่อตัวขึ้นเป็นจำนวนมาก
a clutch of - 1. a small group of things or people, 2. the small set of eggs that a chicken produces at one time
local - in this country (here: Thailand)
deals site - a collective buying website
significant - large enough to be important or have an effect ที่สำคัญยิ่ง
yoga - a set of physical and mental exercises, Indian in origin, which is intended to give control over the body and mind ระบบการบริหารร่างกายและการควบคุมลมหายใจ
international - ระหว่างประเทศ between countries

founder - a person who starts for the first time an institution, business, or organization ผู้ก่อตั้ง
co-founder - one person in a group of founders
doubt - not know for sure if something is true or false, uncertain
There's no doubt ... - for sure .... , it is certain that ...