Chiang Rai will soon connect to Laos at Chiang Khong, a new highway then connects quickly to China. 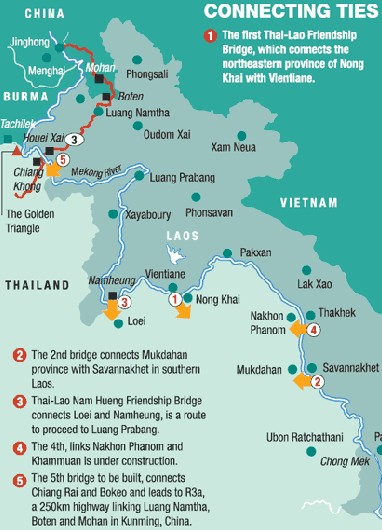 One river, one land: The fourth Thai-Lao bridge is about to take shape to further expand trade volume among six regional countries by Phitsanu Thepthong 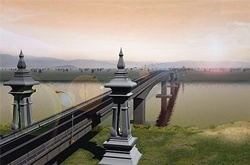 The newly proposed fourth Thai-Lao Friendship Bridge, to be built across the Mekong River in Chiang Rai soon, will further increase trade and travel not only between the two countries but also among the six countries in the Greater Mekong Subregion (GMS).

The third Thai-Lao bridge linking Nakhon Panom with Khammuan is now 70% completed and will open for public use in November this year.

The bidding for the construction contract of the new bridge over the Mekong River was held last year, according to Viroon Kumpilo, president of the Chiang Rai Chamber of Commerce.

"The cost of the bridge is estimated at approximately 1.4 billion baht, and will be equally funded by the Chinese and Thai governments," he told the Bangkok Post.

"It will connect with Route 3A (East), running between Bangkok, Chiang Rai and Kunming in South China and would benefit commercial traffic between the two countries through Laos's Laungnamtha province," he said.

The new bridge is expected to be completed by Dec 10 next year, and will be located at Ban Don Maha Wan, Chiang Khong, and Ban Don Khee Nok, Hueisay, Bo Keo. Mr Viroon expects that the trade potential of both lignite imports from Laos and Thai consumer goods and commodities will be stimulated by the new route.

Meanwhile, he noted that a second, larger port is now under construction in Chiang Rai's Chiang Saen district in order to link Mekong River routes between China, Laos, Burma, and Thailand. The original Chiang Saen port is now overwhelmed by the increase in cross-border traffic.

The construction work of the fourth bridge, is going to start soon around March this year, said Mr Viroon, adding that the date of the foundation stone-laying or ground-breaking ceremony was being worked out.

Meanwhile, the Vientiane Times newspaper quoted Thaworn Worabutre, the deputy director of the bridge construction project, as saying that the construction work for the 480-metre-long bridge, linking Hueisai and Chiang Khong, will take about 30 months to complete.

The fourth bridge construction, when finished, could link Thailand via Laos and connect to southern China as only a 245-kilometre-long road," he said.

The CR5-KT Group of China and Krung Thon Engineering of Thailand jointly constructed the facilities of the 11-km-long road with the bridge, with a combined budget of Thailand and China of US$44.8 million (1.38 billion baht) plus a consulting fee of 2.5 million baht.

For the financing of the bridge, Beijing has granted a loan of US$20 million through the Lao government in 2008 for spending on bridge construction, and the Thai government also spent about 700 million baht, said Mr Viroon.

Now, some land expropriations have been made with compensation payments, also for land, houses, livestock and farms," he added.

Meanwhile, the third Thai-Lao friendship bridge linking Thailand's Nakhon Panom and Khammuan in Laos is also expected to be finished late this year by the Thai Highways Department.

Thailand supported the construction work of the third bridge at a cost of 1.76 billion baht for the 1,423-metre-long and 13-metre-wide structure.

According to Veera Ruangsuksriwong, director-general of the Highways Department, the bridge, now 70% completed, is ahead of schedule, and it is expected to open for public use in November this year.

When completed, these bridges will benefit the economies, trade, tourism, investment, culture, transport logistics and travel links of the two countries in the near future.

The second Thai-Lao Bridge, linking Mukdahan with Savannakhet, was completed and opened for service in 2006. At present, more than 5,000 vehicles use the bridge daily, generating taxes and fee revenue to the government of 60,000 baht a day on average.

The first Thai-Lao Bridge between Nong Khai and Vientiane was opened for public use several years ago.

Trade with Burma and Laos along the Chiang Rai border from January to November 2010 was worth 18.27 billion baht, with Thai exports accounting for 15.51 billion, raising the country's trade surplus by 38.6% to 12.76 billion.

X comprises Y - X is made up of Y, X has Y as its parts
autonomous - independent and having the power to make your own decisions ซึ่งปกครองตนเอ
autonomous region - a region of the country given the power to make many decisions for itself (given some independence in decision-making)
bidding - making an offer in an auction (here trying to offer to do project for lowest cost and thus win contract)
construction - the work of building or making something, especially buildings, bridges, etc. การก่อสร้าง
contract - a written (or oral) agreement that is legally binding สัญญา

funded - money provided for operation of a business or organisation or a project ให้ความช่วยเหลือทางการเงิน ให้เงินลงทุน
link - to connect เชื่อม
benefit - to help someone มีประโยชน์ต่อ
commercial - for business purposes
traffic - the number traveling to a place during a period of time (people, aircraft, ships, trains, cars, trucks, etc.) ความหนาแน่นของจำนวนคน หรือยานพาหนะในช่วงเวลาใดช่วงเวลาหนึ่ง

expected - believe will happen คาดว่า (จะเกิดขึ้น)
potential - possible ความเป็นไปได้
trade potential - the total amount of trade (buying and selling of goods) that is possible
lignite - "often referred to as brown coal or Rosebud coal ...is a soft brown fuel with characteristics that put it somewhere between coal and peat. It is considered the lowest rank of coal; it is mined in Germany, Russia, the United States, India, Australia and many European countries, and it is used almost exclusively as a fuel for steam-electric power generation....Because of its low energy density, brown coal is inefficient to transport and is not traded extensively on the world markets compared with higher coal grades. It is often burned in power stations constructed very close to any mines...Carbon dioxide emissions from brown coal fired plants are generally much higher than for comparable black coal plants...The operation of brown coal plants, particularly in combination with strip mining, can be politically contentious due to environmental concerns"" (See Wikipedia)

consumer - someone who buys and uses goods and services ผู้บริโภค
consumer goods -
commodities - goods with every unit the same (every kilo of rice is the same, for example), usually bought in large quantities สินค้าที่ซื้อเป็นจำนวนมากๆ
stimulated
route - the way that planes, buses, trains, or ships travel regularly เส้นทางของรถ เรือ เครื่องบิน,etc.

port - an area of water where ships stop, including the buildings around it ท่าเรือ
overwhelmed - so much activity or work exists that it cannot all be handled or completed
border - the official line separating two areas, regions or countries เขตแดน อาณาเขต
cross-border traffic - the number of people, cars and trucks going across the border (from one country into the other country)
foundation - the part of a structure of a building that is below the ground and supports the rest of it, a strong base on which a build a building or system รากฐาน
ceremony - a formal public event งานพิธี

deputy - a person who is given the power to do something instead of another person, or the person whose rank is immediately below that of the leader of an organisation รอง, ตัวแทน,ผู้รักษาการแทน
jointly - done together อย่างร่วมกัน, พร้อมกัน, ด้วยกัน
facilities - the buildings and equipment for an activity,a specially equipped place to do a certain activity (for example, athletics facilities) สถานที่และสิ่งอำนวยความสะดวก
budget - the amounts of money that an organisation has available to spend on different things during a period งบประมาณ  (See Wikipedia)
consulting - giving expert advice on a subject (for example: how to run a business or how to build a building)
fee - an amount of money that you pay for some service or to be allowed to do something ค่าธรรมเนียม, ค่าตอบแทน, ค่าบริการ
granted - officially given
loan - an amount of money that a person, business, or country borrows, especially from a bank เงินกู้
spent - used ที่ใช้ไป
expropriation - taking something away from a person
land expropriation - taking land away from owner of land
compensation - money that someone receives because something bad has happened to them, for damage they suffered การจ่า่ยเงินชดเชย
livestock - animals such as cows, cattle, and sheep that are raised for commercial products such as meat, skins, or wool (See Wikipedia) ปศุสัตว์

ahead of schedule - finishing tasks before deadline (time or date they must be finished by)
investment - taking your money and putting it into projects to make a profit or earn interest (buying stock shares, bonds, real estate)
transport - to move people or things from one place to another ขนส่ง
logistics - moving goods from place to place (transportation), coordinating movements, and storing goods in warehouses until needed or sold (See Wikipedia) การขนส่งสินค้า,การขนส่งและจัดจำหน่ายสินค้า
links - connections ความเชื่อมโยงกัน
vehicles - machines with an engine used to carry people or goods from place to place ยานพาหนะ
revenue - income from taxes or business activities รายได้