Five recent unexplained deaths, three of them at the same hotel with Coxsackie B virus present in one of the bodies. 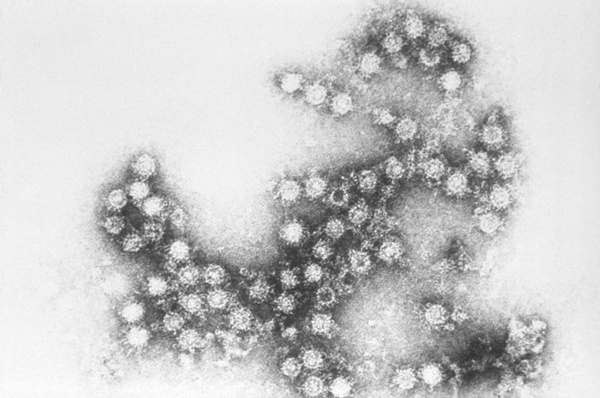 Photo above of the Coxsackie B Virus taken by an electron microscope found in one of the bodies (See Wikipedia).

CHIANG MAI : The Disease Control Department has asked the World Health Organisation to help examine a series of mysterious deaths in Chiang Mai after the Coxsackie B virus was found in the body of a New Zealand tourist who died there last month.

The department insisted the virus might not be the cause of death of Sarah Carter, 23, who died at Chiang Mai Hospital on Feb 6, or four other people who have died since New Year and there should be no panic about a viral epidemic in the province.

Four of the five people who died stayed at the Downtown Inn Hotel in Chiang Mai. They all passed away over a period of 16 days.

A fifth case of a recent unexplained death in the province has since come to light, though she stayed somewhere else.

American Mariam Soraya Vorster, 33, died on Jan 11 after being admitted to a private hospital in the province. Her case came to light on Wednesday.

Vorster's husband Tony Pandolo told the New Zealand Herald that his wife fell ill with symptoms of food poisoning before she died.

Vorster did not stay at the Downtown Inn Hotel, but at another hotel in the province's central district.

Police have ruled out foul play in the deaths, but health authorities are now investigating other possible causes. One theory is that the victims may have contracted the Coxsackie B virus, possibly from eating contaminated food.

The department has invited the New Zealand embassy to take part in the investigation into Carter's death.

Pasakorn Akarasewi, director of the Bureau of Epidemiology, said the Coxsackie B virus can pass from human to human. It causes stomach upsets and in some cases heart damage and death. It is not common in Thailand.

Carter was the third person to have died from "mysterious reasons" in the province since January.

The second death was Thai tour guide Waraporn Yingmahasaranont, 47, who died in her room at the Downtown Hotel on Feb 3.

British couple George Everitt, 78, and Eileen Everitt, 74, who died in the same hotel as Waraporn and Carter on Feb 19, were the fourth and fifth cases.

Chiang Mai provincial health office said a preliminary report showed Vorster, the first known suspicious death but the most recent to come to light, had suffered from inflammation of the heart muscle although officials have yet to reach a conclusion on the cause of death.

Surasi Wisarutarat, Chiang Mai deputy chief health officer, said the health office sent tissue samples from Vorster's body to a lab in the US. The results should be known in about a month.

As for the British couple, Dr Surasi said authorities could say only that they died of an acute heart attack.

Epidemiologists were unable to investigate the case of tour guide Waraporn as his body has been cremated.

Chiang Mai governor ML Panadda Disakul said he had met the New Zealand charge d'affaires and explained the issue. He said provincial authorities had formed a working group to investigate the cases and were waiting for the results of medical examinations.

Authorities are concerned that the mysterious deaths will affect Chiang Mai tourism which has only just recovered from last year's political turbulence.

Stricter control will also be imposed on guest houses, apartments and boutique hotels because most visitors to Chiang Mai stay at these places

We will work closely with the private sector to restore the image of the province before the Songkran festival next month," the governor said.

electron microscope - a type of microscope that "uses a particle beam of electrons to illuminate the specimen and produce a magnified image...have a greater resolving power than a light-powered optical microscope...can achieve better than 0.2 nm resolution and magnifications of up to 2,000,000x, whereas ordinary, non-confocal light microscopes are limited by diffraction to about 200 nm resolution and useful magnifications below 2000x" (See Wikipedia)

epidemic - a large number of cases of a particular disease happening at the same time in a particular community โรคระบาด
epidemiology - the branch of medical science dealing with the transmission and control of disease, the study of factors affecting the health and illness of populations, and serves as the foundation and logic of interventions made in the interest of public health and preventive medicine (See Wikipedia)

death certificate - a document issued by a government official that declares the date, location and cause of a person's death (See Wikipedia)
coroner - the doctor responsible for "investigating and determining the cause of death, particularly death that occurs under unusual circumstances. Depending on the jurisdiction, the coroner may adjudge the cause personally, or may act as the presiding officer of a special court..a coroner's jury," also known as a "forensics examiner" (See Wikipedia)
pathology - "the study and diagnosis of disease" (See Wikipedia)
forensic pathology - "a branch of pathology concerned with determining the cause of death by examination of a corpse...also frequently asked to confirm the identity of a corpse" (See Wikipedia)

symptoms - a departure from normal function or feeling in the body which is noticed by a patient, indicating the presence of disease or abnormality (See Wikipedia)

contaminated - made dirty, polluted or poisonous by the addition of a chemical, waste or infection

stomach upsets - stomach ache, abdominal pain, pain in the abdomen (See Wikipedia)
abdomen - the area of the body that contains the pancreas, stomach, intestines, liver, gallbladder, and other organs, in the front of the body the soft area between the rib cage and the pubic area (with penis or vagina) (See Wikipedia)

inflammation - a red, painful and often swollen area in or on a part of your body การอักเสบ, การติดเชื้อ
tissue - the substance that animal and plant cells are made of เนื้อเยื้อ

acute - happens suddenly, very serious and severe เฉียบพลันและรุนแรง
heart attack - "the interruption of blood supply to a part of the heart, causing heart cells to die. This is most commonly due to occlusion (blockage) of a coronary artery" (See Wikipedia)
acute heart attack - a sudden severe heart attack that can lead to death

suspicious - making you believe that something is wrong, dangerous or illegal น่าสงสัย
series - several things or events happening, one happening then another happening , then another .... etc
mysterious - not explained or understood; full of secrets ลึกลับ, น่าพิศวง, น่าประหลาด
insisted - say firmly that something must happen or is true
panic - a sudden intense uncontrollable fear, a sudden strong feeling of fear and confusion, which makes you act without thinking carefully ความหวาดวิตก (See glossary)

theory - one or more ideas that explain how or why something happens สมมติฐาน
victims - people who are killed injured or harmed in some way from an accident, natural disaster, crime, etc.

embassy - a group of officials who represent their government in a foreign country สถานทูต
investigation - try to find out what happened during an event, discover the truth การสอบสวน การตรวจสอบหาข้อเท็จจริง
'
common - happening often, used often, found often, etc...
surrounding - all around a place บริเวณรอบๆ

couple - two people who are married or are involved in a romantic relationship คุ่รัก
preliminary - not final, temporary
conclusion - a final decision การสรุป การตกลงขั้นสุดท้าย
deputy - the person whose rank is immediately below that of the leader of an organisation รอง, ตัวแทน,ผู้รักษาการแทน
officer - a high level person in an organisation with special responsibilities (a government officer, a police officer, an army officer, a health officer)
results - what is produced in the end by an activity or task

charge d'affaire - "in diplomacy, chargé d’affaires (French for “charged with (in charge of) matters”), often shortened to simply chargé, is the title of two classes of diplomatic agents who head a diplomatic mission on a temporary basis" (See Wikipedia)

issue - a problem that needs to be considered ประเด็น
concerned - worried about something มีความกังวล
recovered - get better again, became fit and healthy again ฟื้นฟูร่างกาย
turbulence - 1. a state of confusion, disagreement or lack of order ความวุ่นวาย, 2.  strong sudden movements within air or water การเคลื่อนไหวผิดปกติของบรรยากาศ
political turbulence - state of political confusion (protests, bombs, don't know what is going to happen next)

measures - actions that are intended to achieve or deal with some problem มาตราการ
stalls - large tables or small shops with an open front from which goods are sold in a public place แผงขายของ
vendors - people who sell things, e.g., food or newspapers, usually outside on the street พ่อค้าแม่่ค้าหาบแร่แผงลอย
impose - force someone to do something or follow some rule
sector - a part of the economy ภาคเศรษฐกิจของประเทศ (public sector = government, private sector = all businesses, household sector = families and consumers, banking sector,...) (See Wikipedia)
restore - to cause a particular situation to exist again, especially a good one ฟื้นฟูสภาพ
image - the picture oor opinion of something that people have in their mind, what people think about something ภาพลักษณ์