A master perfumer from France reveals the secrets of his profession. 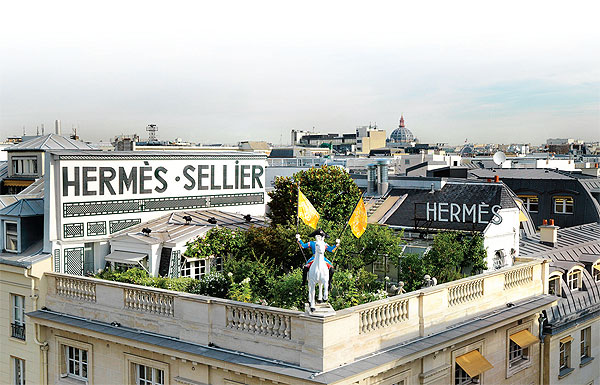 Photo above of the Hermes boutique rooftop garden, the inspiration for a new perfume.

When Jean-Claude Ellena works on a new fragrance, he doesn't have a particular profile of who will be wearing it. "If you're a creator, you work for yourself not for somebody else," he said. "But when you have finished composing the perfume, then you share it with other people and hopefully they will like it."

The Hermes in-house perfumer was in Bangkok for the regional launch of the fourth Garden fragrance, a fresh and light olfactory blend for both sexes to spritz on their charm.

"We don’t really need to find another world when happiness can be very close to us,’’ said Jean-Claude Ellena.

"In the past, perfumes had no gender. Men and women would walk into a perfumery and smell bottles after bottles and decide which one to buy," he said. "Today, marketing determines that this is for women, this is for men, and pushes people to buy [them]. We don't believe in this marketing talk and viewing people as targets. It's better to give people the freedom to choose and to decide for themselves.

The notable Garden collection now has four choices. In 2003, Ellena created the first perfume, Un Jardin en Mediterranee, inspired by a garden on the Tunisian shoreline. It was followed by Un Jardin sur le Nil, referring to the island gardens in the delta of the king of the rivers, and Un Jardin apres la Mousson, expressing a rebirth of nature captured in Kerala, India after monsoon rains.

The perfumer-composer, as Ellena likes to be called, journeyed out of France to capture the scents of the faraway gardens. But for the fourth fragrance in the series, he only had to take the stairs up to the rooftop garden of Hermes boutique at 24 Faubourg Saint-Honore, in Paris.

"After we launched the first Garden perfume, other companies came up with the same approach," he said. "We wanted the fourth perfume to be a surprise. Also, no one could come up with a perfume like Un Jardin sur le Toit because we drew inspiration from our very own garden. This reflects why we don't really need to find another world when happiness can be very close to us."

With a panoramic view of Paris, the rooftop garden has been there since the 1920s, and during the war it was used as a reserve for fruits and vegetables. Today, apple and pear trees grown on Normandy soil and Paris air stand tall in the sky-high rooftop garden, which is also adorned with roses, magnolias, hibiscus, as well as other flowers

A native of Grasse and the son of a perfumer, Ellena followed in his father's footsteps since he was 28. At first he created complex fragrances, and his very first perfume contained over 150 ingredients. But now, his minimalist style employs much less ingredients.

"It's more difficult to be simple because you have to be precise and know exactly what you want to say," he said. "It's like when you write something very long, people may not understand it and so you do some rewriting. The process of simplification also applies to perfume making - and with less ingredients, you can be more effective. My work thus is now about how can I say more with less."

What's also important to him is that a scent should not disturb other people, and that people should come up close to you and ask, "Tell me what you're wearing."

fragrance - 1. a sweet or pleasant smell กลิ่นหอม, 2. a perfume
scent - a smell (especially a pleasant smell)
inspiration - someone or something that gives you new ideas or enthusiasm to do something แรงบันดาลใจ

familiar - well-known, people know it well, have a lot experience with it, recognise easily maestro - a person who is very skilled at what they do such as musician (who people respect and admire a lot)

profile - a description of a person including information such as who they are, their work and their personal interests, and their likes and dislikes
composing music - writing new music to be sung and played by musicians on their musical instruments
composing the perfume - creating a new perfume in the same way a  composer would compose new music
share - let other people have or use something that you have

targets - goals or levels you plan to achieve
shoreline - at the water's edge of a lake or sea
rebirth - coming to life again, as if being born again and coming to life for the very first time)
nature - all the things such as trees, animals, forests, the ocean, plants that were on earth before man ธรรมชาติ
monsoon - the season of heavy rain during the summer in hot Asian countries มรสุม (See Wikipedia) ฤดูมรสุม

journeyed - traveled from one place to another on a long trip
capture - to express what something really is in a way that people can easily recognize it
series - many things (one thing following another, again and again, over and over again)

precise - exact and accurate in details แม่นยำ
long - to want something very much ต้องการ ปรารถนา
process - a series of actions that you take in order to achieve a result แนวทางปฏิบัติ, กระบวน, วิธีการ
effective - working well, getting the job done, producing the result that was intended ได้ผลดี
disturb - to annoy, to do something that stops a place from being pleasant, calm and peaceful รบกวน