Thailand's strong sun can cause skin cancer. It is never too early to start protecting your child's skin. 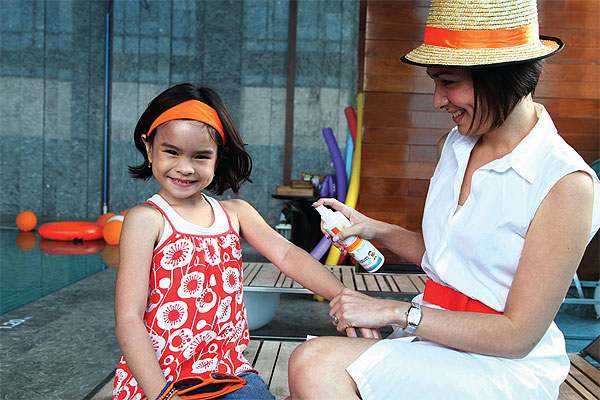 Saving your skin: Even children are prone to UV radiation and advised to use sunscreens by Kanokporn Chanasongkram

Playing outdoors, enjoying a splash in the pool or even sitting in the car, kids are vulnerable to UV radiation but, according to a recent survey, only seven to 10 per cent of Thai youngsters received some kind of sun protection.

As much as adults, kids should step up skin defence by applying sunscreen daily.

Professor Siriwan Wananukul MD emphasized that children as much as adults should step up skin defence by wearing long-sleeved clothing, hat and sunglasses as well as applying sunscreen daily. In addition, avoid sun exposure during 10am until 4pm.

She observed that sunscreen usage among Thai children however is not widespread for a country with sunlight all year round. This may be due to parents thinking that their children are mostly indoors and thus safe from UV radiation, and also due to the lack of children sunscreen products available in Thailand.

UV radiation consists of skin-damaging UVA and UVB. Affecting the top layer of the skin, UVB causes sunburn, and long term exposure increases the risk of skin cancer. Sunburn symptoms in kids however may seem less obvious than in adults.

"Efficient skin cell turnover and healing in children may make UV damage less noticeable than in adults with declining skin renewal function. Even without the apparent sunburn, there's an accumulating damage, particularly from UVA that unfolds in later years," said Dr Siriwan, who's based at Chulalongkorn University's Faculty of Medicine.

UVA goes deeper to tamper with the skin's scaffolding of collagen and elastin fibres, resulting in premature skin ageing. Since kids don't have wrinkles like the young Benjamin Button that we saw in the movie, UVA protection may not seem as crucial as it should be

"Children's skin need both UVB and UVA protection. UVA can penetrate glass, and kids sitting in the car or by the window are exposed to this type of radiation," she said. "Constant exposure leads to accumulative skin damage. A study showed that 80 per cent of lifetime sun exposure occurs in the first 18 years, and so sun protection from childhood is important for future health of the skin."

Children's skin is thinner and more sensitive to chemical substances that can irritate their skin thrice as much as adults' skin. Thus they have to use gentle formulas developed for sensitive skin with a pleasant texture that encourages regular usage of sunscreen.

(Source: Bangkok Post, Saving your skin, Even children are prone to UV radiation and advised to use sunscreens, 6/04/2011, Kanokporn Chanasongkram, link)

UV radiation - ultraviolet light or radiation, invisible to the human eye, causes sunburn and contributes to skin aging and cancer, "electromagnetic radiation with a wavelength shorter than that of visible light, but longer than X-rays, in the range 10 nm to 400 nm, and energies from 3eV to 124 eV" (See Wikipedia)

sunscreen - a cream rubbed into the skin to prevent sunburn; a lotion, spray, gel or other topical product that absorbs or reflects some of the sun's ultraviolet (UV) radiation on the skin exposed to sunlight and thus helps protect against sunburn (See Wikipedia)

sleeve - the part of a shirt that covers the arms แขนเสื้อ
long-sleeved - a shirt with long sleeves
exposure - not covered or protected from harm, runs a risk of being harmed
sun exposure - when the sun hits a person's skin for a period of time
exposed - not protected from something ได้รับ ได้สัมผัส (แดด หรือสารพิษ เป็นต้น)
widespread - happening or existing in many places, or affecting many people อย่างแพร่หลาย
lack - does not have ขาดแคลน

launch - to start selling a new product or service to the public เริ่มวางขาย การเริ่มปฏิบัติการ, การออกตัวของสินค้า

sunburn - when a person stays outdoors too long with with sunlight hitting the skin which damages the skin red and hurt, "a burn to living tissue, such as skin, which is produced by overexposure to ultraviolet (UV) radiation, commonly from the sun's rays. Usual mild symptoms in humans and animals include red or reddish skin that is hot to the touch, general fatigue, and mild dizziness. An excess of UV radiation can be life-threatening in extreme cases. Exposure of the skin to lesser amounts of UV radiation will often produce a suntan" (See Wikipedia)

layer - a thin sheet of a substance; a level of material, such as a type of rock or gas, which is different from the material above or below it ชั้น
risk - the possibility that something dangerous or unpleasant might happen ความเสี่ยง
obvious - easy to see and understand ชัดเจน

skin -  ผิวหนัง (See Wikipedia)
cell - (biology) the basic unit that all living things are made of; either as independent units of life orin colonies (bacteria) or tissues (organs in human body) (See Wikipedia)
skin cell - the two basic kinds of skin cells are the dermal and epidermal cells (See Wikipedia)

declining - getting worse
renewal - growing strong again (became weak in the past)
function - the useful thing that something does
apparent - clear; easy to be seen or understood ซึ่งเห็นได้ชัดว่า
accumulating - gathering, collecting together

tamper with X - trying to change or do something to X which you should not do
scaffolding - support; a structure that holds things up

connective (adjective) - connecting; serving as a link between things, binding them together
connect (verb)
connection (noun)
connective tissue - teh cells and tissue in the body that hold things together, "a fibrous tissue. It is one of the four traditional classes of tissues (the others being epithelial, muscle, and nervous tissue). Connective Tissue (CT) is found throughout the body. It has 3 main components; cells, fibers, and extracellular matrix. Connective tissue makes up a variety of physical structures including, tendons, blood, cartilage, bone, adipose tissue, and lymphatic tissue" (See Wikipedia)
tissue - a group of cells that perform the same special body function (See Wikipedia)
elastin - a yellow protein that is the most important part of elastic connective tissue brittle when dry but flexible and elastic when wet (See Wikipedia)
fibre - a thin thread as found in cloth or rope เส้นใย, ไฟเบอร์,

premature - happening early than normal or necessary
scaffolding - a structure that holds somthing up นั่งร้าน
premature - happening too early, before the usual time ก่อนเวลาอันควร, ร็วเกินไป, ก่อนเวลา
crucial - extremely important because it effects the result of something สำคัญยิ่ง

penetrate - getting into (or passing through) something that is difficult to get into ใส่เข้าไป
sensitive (adjective) - a strong physical reaction or response to something, easily affected by something (here: sun hurts easily) รับความรู้สึกได้ง่าย, รู้สึกไว
sensitivity (noun) - skin sensitivity (here: how strongly the skin reacts to sun)
sensitive skin - skin that is easily hurt

irritate (verb) - to hurt a part of your body, making it painful, red or swollen ทำให้ระคายเคือง
irritation (noun) - a painful feeling in a part of the body, often with red skin or swelling การทำให้ระคายเคือง,การยั่วโทสะ,การกวนประสาท,การทำให้ฉุนเฉียว,ความระคายเคือง,การอักเสบ
thrice - three times