In Northern Thailand the eggs of maeng mun ants are dug up from the ground, cleaned and eaten as a rare and special food. 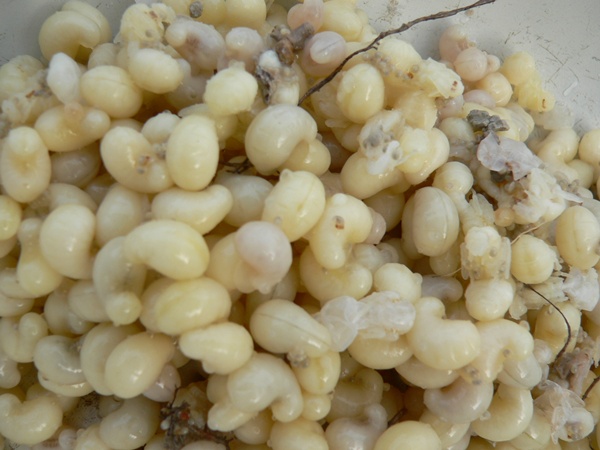 For more information on ants and other insects in Thailand see the Siam Insect Zoo and Museum's website in Chiangmai: www.malaeng.com.

Hunting down a delicacy: Digging for 'maeng mun' ant eggs, an edible treat in the Northeast, requires skill and patience by Saiarun Pinaduang 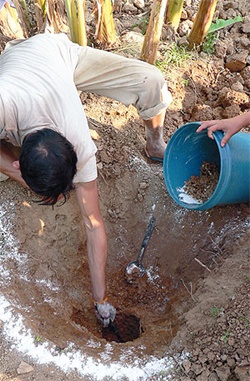 One late sunny morning, an old man and a middle-aged friend were busy digging up the ground and peering into the hole they had made.

The hole was bursting with ants scrambling frantically to defend their habitat against intruders.

"They're not red ants but maeng mun," explained Pan Hongluek, aged in his 60s.

Maeng mun look similar to red ants. Their eggs are a favourite food of northern people and also a delicacy.

Patience is needed to search for the underground home of maeng mun and keen observation skills are needed to find their eggs, he said.

"If you find a large number of maeng mun, you are probably close to the inner cells of their underground home," he said.

Once the inner cells are located, the ant hunter follows little tunnels connecting to a larger underground cavity where the ants lay their eggs.

This process may take an hour. With luck the hunters will stumble on a large pool of white eggs. The pearly-white eggs are about 0.5cm in size, and are fragile.

In hte photo on the right, a hunter has his hand covered in cassava starch to prevent being bitten by angry ants. Some of the powder is also injected into the hole.

Even if the hunter finds no eggs, he can still eat the ants.

The adult ants can be deep-fried and eaten as snacks. However, ants are less prized than the eggs.

One trick to prevent the eggs from being damaged is to spoon them up in a clump of soil. They should then be transferred to a bucket filled with water.

To avoid being bitten by the ants, cassava starch is injected into the cavity.

After the eggs are soaked in water for about 10 minutes, they are sifted from the dirt.

Each cavity of maeng mun usually yields between 500 and 1,000 grammes of the eggs which sell for 1,000 baht. February and March is the main hunting season.

Home owners often call professional maeng mun diggers such as Mr Lek and Mr Pan, when they spot a nest on their property.

The ant hunters take half the money from the sale of the eggs; the other half goes to the house owner.

They usually collect only the large eggs, leaving small ones in the cavity to hatch into ants which can then be caught in the following rainy season.

The maeng mun diggers usually leave wooden sticks or tree leaves in the cavity before covering it with soil.

As they break down, these materials will serve as a source of food for the ants.

The ants like crumbly soil in mountainous terrain full of rotten tree roots.

But the ants can also be found in villages when they are transported with soil taken from the mountains.

An underground cavity can be as large as three to four square metres.

The ants will normally stay put even if a hunter finds their home, as long as the hunter leaves some eggs behind.

Mr Lek said wise maeng mun diggers leave sufficient eggs behind to hatch. This way, the diggers can come back to collect more eggs in the next season. The ants dislike chemicals, which is why they are seldom found close to vegetable plots where pesticide is used.

These ants can serve as a food source forever, as long as no one uses chemicals," said Mr Lek.

ant - the small insects that live in large colonies commonly seen when sugar is left out on the table (See Wikipedia)
maeng mun - the species of ant that is the subject of today's article (Biological name: carebara castanea F. Smith) (See Insect Museum Chiang Mai , Encyclopedia of Life and Wikispecies; other relevant pages: #1, #2)

subterranean - under the ground อยู่ใต้ดิน
species - a set of animals or plants in which the members have similar characteristics to each other and can breed with each other พันธ์,จำพวก

hunting down - searching for something, looking in many places to find something habitat - the type of place that a particular animal usually lives in or a particular plant usually grows in ถิ่นที่อยู่ของพืชหรือสัตว์
intruder - people who go into a place but do not belong in that place
defend - to say things to support someone or something ปกป้อง

delicacy - a special type of food, rare and expensive food (example: shark's fin soup is considered a delicacy by the Chinese)
edible - can be eaten, possible to use as food (without being poisoned and dieing)  treat (noun) - something special and enjoyable such as special food or a special trip (example: their father always gave them a special treat on their birthday like taking them out to a nice restaurant)
cell - a small room or space (for example, monk cells in a monastery, or cells for prisoners in a jail) tunnel - an underground passage way, a hole in the ground that can be traveled through (by cars or a small hole by animals) cavity - a hole or space within a solid object
lay eggs - the process of eggs passing out of an animal (such as a chicken)

deep-fried - cooking food in boiling oil or fat (See Wikipedia)
crumb (noun) - a very small piece that falls off of cake or bread ชิ้นเล็กๆ
crumbly (adverb) - when cake or bread is breaking into small pieces (crumbs) แตกเป็นชิ้นเล็กๆ
terrain - an area of land, usually one that has particular physical features ภูมิประเทศ
pesticide - chemicals to kill insects that eat and destroy plants (See Wikipedia) ยาฆ่าแมลง
food source - something such as animals, vegetables or fruit used to make food for eating

patience - being able to stay calm and peaceful when somethiing bad is happening to you (waiting a long time, someone made a mistake, etc)
companion - a friend that you travel with (that you go to some place or do some activity with)
late sunny morning - before 12 noon but
middle-aged - no longer young but not yet old peer - to look very carefully at something that is difficult to see

burst - suddenly breaks or splits open and whatevery is inside comes out
X bursting with Y - large amounts of Y inside X (so much that X is almost bursting)
scrambling - moving quickly (but unorderly) to do something
frantically - doing something with great energy and worry (anxiety, panic)

favourite - a person who is expected to win a competition, such as an election
search - to look somewhere carefully in order to find something ค้นหา
skills - a type of work or task requiring special training and knowledge ทักษะ ความสามารถเฉพาะทาง
observation - watching very carefully to see exactly what is happening at a place or in an activity
keen observation skills -  very skilled at observation, a good observer, a person who is very good at watching some activity and noting in detail what is happening
process - a series of actions that you take in order to achieve a result แนวทางปฏิบัติ, กระบวน, วิธีการ
stumble on - find accidentally
process - a series of actions taken to achieve a result
pool - a group or collection with many things or people in it
fragile - easy to break or damage ที่เปราะบาง ที่หักง่าย
cassava - a plant used to make tapioca and also natural fuel for cars (See Wikipedia)
starch - แป้ง, คาร์โบไฮเดรต

inject - 1. to put a drug into your blood by a needle passing through the skin; 2. putting some subtance into a small space through a small hole (example: the small plastic figurines were made by injecting plastic into molds)
prized - something that a person considers or believes is valuable
spoon them up - use a spoon to pick or scoop them up and move them to some place

clump - a solid mass of something กลุ่มก้อน
transferred - moved
bucket - a container with an open top and a handle, often used for carrying liquids ถัง

yields - produces an amount of food ให้ผลผลิต
professional - do the activity to make money, as a business
spot - to see or notice
property - land that they own
hatch - the birth of a lot of insects or animals from eggs ออกจากไข่
leave X in Y - put X in Y and keep there (do not move or remove)
break down - break into pieces (from one big thing to many pieces)
source - the place or person something comes from or starts at, or the cause of something ต้นกำเนิด, แหล่งกำเนิด

transported - moved from one place to another
stay put - not move, remain in one place