Is the payment of tea money still effective in getting children into prestigious schools? That's now a subject of hot debate and possible legal action. 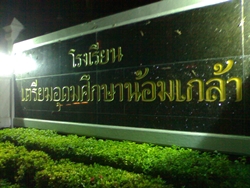 A prestigious Bangkok school has been accused of asking for tea money in exchange for seats for students.

An investigation involving the Education Ministry has found some schools had doubled their requests for money from parents, despite being warned to put a halt to the practice. Among them is the highly regarded Triam Udom Suksa Nomklao School in Saphan Sung.

With help from the National Anti-Corruption Network, a civic group monitoring state corruption, the complaint was sent to Education Minister Chinnaworn Boonyakiat yesterday.

The network's secretary, Mongkolkit Suksintharanon, said the parent of a Mathayom 3 student, whose name was withheld, in the Triam Udom Suksa Nomklao School filed a complaint to the network that their child was in the 12th substituted seat for continuing studies in the upper class of Mathayom 4.

The school refused him and instead accepted another student who was in the 22nd substituted seat.

After looking into the case, the network found the process of recruiting students in substituted seats was "unclear". The network then found some parents had paid 30,000 baht to the school to secure a seat, Mr Mongkolkit said.

"The Education Ministry said it is closely monitoring 366 highly competitive schools and has placed requirements on schools to stop asking for tea money but only 40% followed this policy while the rest are apparently trying to double the tea money request," he said.

He said the tea money was received in various ways, including payments via substituted seats, donations and religious activity financial support.

The network would also hand the case to the Office of the National Anti-Corruption Commission.

The Mathayom 3 student's father said his son had no chance to continue studying in Mathayom4 level at this stage.

Sarayut Foosupniran, director of Triam Udom Suksa Nomklao School, insisted there was no bribery at the school and that it had already clarified the allegation with the Secondary Educational Service Area Office 2 and the student's parent.

He said it was normal for the school to have a quota for prominent students who "enhanced the reputation of the school". He said the 22nd substituted student could have been in that group.

He said Mathayom 4 class admissions were ascertained from examination results, an appraisal of those at Mathayom3 level who wanted to continue at the same school, and pupils who might enhance the reputation of the school.

"There has been no bribery in the school," he said.

"Why would I risk being fired or investigated in exchange for a little amount of money?"

He said he planned to file a lawsuit against the accuser.

bribe – money or a present given to someone so that they will help you doing something dishonest or illegal สินบน
scam – a dishonest plan, especially for getting money  กลโกง, แผนร้าย
prestigious – admired and respected by people  ที่มีชื่อเสียง ที่ได้รับความนับถือ
tea money – a bribe; money paid improperly so that someone will help you in some way
investigation – the process of trying to find out all the details or facts about something การสอบสวน
double – to become twice as big, twice as much or twice as many เพิ่มเป็นสองเท่า
warn – to make someone aware of a possible problem or danger เตือน
halt – a stop หยุด
highly regarded – having a good or positive image  มีชื่อเสียง
network – a large system of connected parts, organisations, people, etc. เครือข่าย
civic group – a group made up of citizens rather than government officials
monitor – to regularly check something or watch someone in order to find out what is happening  ตรวจสอบ ตรวจตรา
state – government รัฐบาล
withhold – to refuse to give something to somebody, in this case, a name  ไม่ระบุชื่อ
substitute – a person or thing that is used instead of another person or thing สำรอง, คนหรือสิ่งที่เข้าแทน
refuse – to say you will not do something that someone has asked you to do ปฏิเสธ
process – a series of actions that you take in order to achieve a result แนวทางปฏิบัติ, กระบวน, วิธีการ
recruit– to persuade someone to join a group, class, organisation, etc. รับคนใหม่
secure – to get or achieve something
competitive – having a high level of close competition, in this case, for admission to a school แข่งขันสูง
policy – a set of plans or action agreed on by a government, political party, business, or other group นโยบาย
apparently – based only on what you have heard or think, not on what you are certain is true; seemingly ตามที่ได้รู้มา
donation – money or goods that you give to an organisation, especially one that helps people เงินหรือสิ่งของบริจาค
insist – to keep saying very firmly that something is true ยืนกราน ยืนยัน
clarify – to explain something more clearly so that it is easier to understand  แจกแจง   ชี้แจง
allegation – an accusation; a statement that someone has done something wrong or illegal even though this has not been proved ข้อกล่าวหา
quota – an amount of something that someone is officially allowed to have or do โควตา
prominent – important and well known สำคัญ, มีชื่อเสียง, เด่น
enhance - to improve the quality, amount or strength of something ปรับปรุง, ทำให้ดีขึ้น
reputation – the opinion people have about how good or bad someone or something is ชื่อเสียง
admission – agreeing that something is true, especially when you are unhappy, sorry or surprised about it  การยอมรับ
ascertain – to discover; to make certain สืบให้แน่ใจ
appraisal – a judgement of the value, performance or nature of somebody/something การประเมิน
risk – to cause someone or something to be in a dangerous situation เสี่ยงอันตราย
fired – to be forced out of your job as a punishment ถูกไล่ออก
file – to take official action like making a complaint  ยื่นคำร้อง
lawsuit – a case that a court is asked to decide involving a disagreement between two people or groups คดีที่ยื่นฟ้องต่อศาล