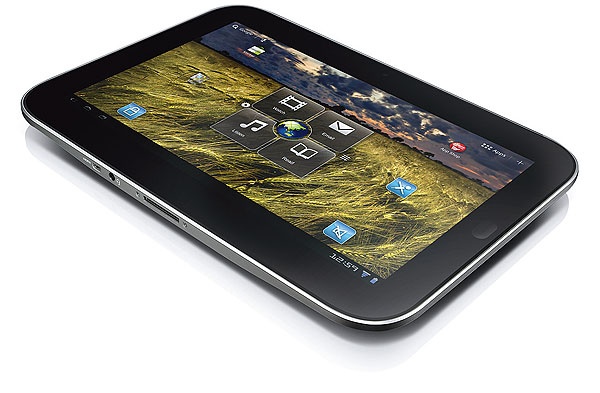 Better late than never, but Lenovo thinks it's now the right time to enter the tablet battlefield. The company's entry in to the field covers two Android-powered tablets, the IdeaPad K1 and ThinkPad, which will work together with the new Lenovo App Shop.

The 10-inch IdeaPad comes with full support for Flash content with over 50 preloaded apps and the Lenovo Cloud storage solution.

...we provide tablets that cater to different consumers - the IdeaPad K1 for those who are looking for connection on-the-go and ThinkPad tablet for business professionals," said Ronnie Lee of Lenovo S

...Lenovo has been the world's fastest growing PC company for nine consecutive quarters.

In addition to the thousands of apps available at the Android Market, Lenovo tablet users will have access to the Lenovo App Shop ... which features popular applications that have been tested specifically for Lenovo IdeaPad and ThinkPad tablets. There are already more than 200 Lenovo-exclusive apps.

The ThinkPad tablet allows users to jot down notes with the optional pen and they will be automatically converted to handwritten text. When even more versatility is required, users can plug in the keyboard Folio for fast, comfortable and accurate typing and mouse control.

...Lenovo Thailand will announce both tablets tomorrow, with one of them going on sale. The IdeaPad K1, wi-fi version will be priced at 16,900 baht including VAT. The ThinkPad tablet will not immediately be available here.

According to IDE, tablets will experience a 5-year compound average growth rate of 54% in Asia/Pacific, excluding the Japan region, multiplying about 10 times to 21 million units from 2 million units shipped in 2010.

IDE expects more consumers will adopt media tablets to fill their gaming, web-browsing and social networking needs on the go. Some of this demand may be driven by the education sector, such as the Thai government's recently announced plan to distribute 800,000 Android tablets to primary school students.

This latest announcement has not yet been factored into IDE's forecast, and there are certainly opportunities out there to keep driving media tablet growth.

gadget - a small computer or technological device or object that can perform some task (examples: a GPS device that shows you where your car is on the map) (See Wikipedia)
device - a machine or piece of equipment that does a particular job เครื่องจักร อุปกรณ์ เครื่องมือ

better late than never - meaning: it is late (not good), but it happened (good)

Operating System (OS) - on a computer the software system that connects computer programs and software to the hardware (See Wikipedia)
Android operating system - Google's platform for mobile phone and tablet software based on Linux and providing data storage, text messaging, a web browser, and video-audio-image support, as well as several other features (See Wikipedia)

Android 3.0 Honeycomb - a version of the Android operating system to be released in the future (See Wikipedia)

app - Same as "application" or "computer application"
application - a computer program that helps a used do some useful task, the popularity of the word has increased recently with the widespread use of mobile devices such as the iPhone, IPad and Android devices (See Wikipedia)
app shop - a store on the web that sells "apps" that work on a certain OS: iPhone, iPad, Android, Lenovo, etc
Lenovo App Shop - the app shop where Lenovo will sell apps specially made for its tablets

Flash - "a multimedia platform used to add animation, video, and interactivity to web pages. Flash is frequently used for advertisements, games and flash animations for broadcast. More recently, it has been positioned as a tool for "Rich Internet Applications" ("RIAs"). Flash manipulates vector and raster graphics to provide animation of text, drawings, and still images. It supports bidirectional streaming of audio and video, and it can capture user input via mouse, keyboard, microphone, and camera" (See Wikipedia)

content - information of interest to people; the stories and pictures inside a newspaper, website or other form of media เนื้อหา สาระ
full support for Flash content - meaning: Flash works on Lenovo tablets (Flash does not work on the popular iPad)
storage - the putting and keeping of things in a special place for use in the future การเก็บ

mobile - can use it when you are moving around, going different places (example: i can bring my mobile phone anywhere, since he lived out of his suitcase, he was very mobile)
on-the-go - moving around all the time (almost the same as "mobile")

mobile entertainment device - a device you can bring anywhere and entertain yourself (and perhaps others) with, watching movies, videos, listening to music, reading books, etc ...

notes - a short sentence, phrase or some words, you write down to help you remember about something (for example, a university lecture that you are listening to)

jot down notes - write notes quickly (while you listen to someone talk, for example)
optional pen - a pen that you can choose or notchoose (depending on what you like; not required)

converted - changed form one form to another เปลี่ยนระบบ; เปลี่ยน โอนจากที่หนึ่งไปยังอีกที่หนึ่ง
automatically converted to handwritten text - Same as "handwriting recognition"
handwriting recognition - a computer "app" that allows you to write on the screen and it turns the writing into a typed computer document (See Wikipedia)

plug in - put one device into another device, insert

accurate - copying correctly or exactly (what was written or typed)
optional - can choose, but not necessary; available or possible if you want it, but you do not have to have it or do it ตัวเลือก ทางเลือก ที่เลือกได้

accurate - correct, exact and without any mistakes ถูกต้อง, แม่นยำ

immediately - happening right after something else with no delay; right away ทันที

distribute - to give something to a group of people แจกจ่าย
primary school - the first level of school that children go to, starting at around age 6