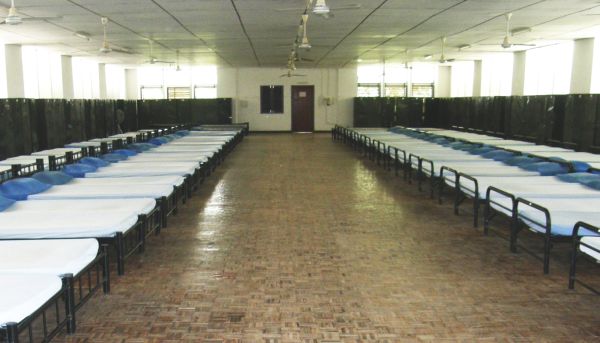 Photo above of the stark rows of beds at a drug rehabilitation center.

Kung was running with a crowd of friends experimenting with crystal methamphetamine, but one day the fun came to an end: he was arrested.

But instead of being thrown into jail for years, he was given a chance to take another path, one with a drug-free future and the chance to learn new job skills.

Kung was sent to Wittayalai Lukpuchai (Spirit College) to participate in a new rehabilitation centre that is helping him reintegrate into society by teaching him how to fix household appliances such as fans, TVs, washing machines and stereos.

"After I was arrested, I realised that I didn't want to be like this anymore, so I joined this programme," says Kung, who is in his mid-20s. "Thanks to the new skills, I am very proud of myself that I can go out and help people who are in need. Recently, we went out and were able to fix someone's TV, of course, at no charge."

Spirit College's rehabilitation centre is already busy, but its patient base of drug addicts is likely to swell under the Yingluck Shinawatra government's new anti-drugs campaign.

Spirit College was established jointly by the Trang Provincial Office and the Office of the Narcotics Control Board (ONCB) last February in Sikao district.

The approach is not to treat drug addicts like criminals but like patients who need to be healed. The centre teaches them vocational skills ranging from electronics to agriculture, so that once they complete the programme, they will be able to find jobs and be less inclined to revert back to drugs.

"This centre prides itself on its slow and deliberate pace to rehabilitate drug addicts," Trang governor Maitri Intusut said. "We have a proven track record and our programme fully complies with the government's anti-drug policy."

Spirit College is one of a number of drug rehabilitation centres nationwide that will help rehabilitate drug addicts caught under the government's new campaign to eradicate narcotics.

The government on Sunday launched a one-year drug war and pledged to turn 400,000 of the country's 1.2 million drug addicts into decent citizens through rehabilitation and vocational training programmes.

Wittayalai Lukpuchai has three programme lengths: five days, 15 days, and the most intense programme of 45 days. The length is determined by the severity of a patient's addiction, and each class consists of about 50-70 participants, both voluntary and involuntary.

There are three main phases of the rehabilitation process: psychological, vocational and familial.

First, the patients go through psychological rehabilitation and therapy, so they learn more about drug abuse. Then they are provided vocational training during which they are taught work skills such as electronics, woodworking, and agriculture.

The training method uses patients who have prior knowledge in different fields as teachers in the workshops.

Bank is one of the drug addicts whose skills were put to use teaching other patients.

Bank, also in his mid 20s, and hooked on speed pills before entering the programme, said: "This programme has allowed me to use my prior education in mechanics to contribute."

During the last phase of rehab, both the patients and their family members learn together how to prevent and combat drug abuse and create further understanding of the patients. After completing their stint, patients are monitored regularly to make sure they do not relapse.

Governor Maitri said addicts who have undergone rehabilitation and vocational training can apply their skills in the real world, and they can help raise awareness of the scourge of drug abuse.

ONCB Deputy Secretary-General Narong Rattananugul said he was optimistic about the programme.

"Addicts are victims, not criminals, and its everyone's problem," he said. "We will continue to improve our programs to forever rid Thailand of drugs."

patient - someone who is receiving medical treatment คนป่วย, คนไข้
heal patient - when a doctor or other health worker helps a patient return to health (cure disease)

decent citizens - good citizens (with a job, taking care of their family and community, not a criminal, etc)

drug abuse - taking a drug for a non-medical reason such as alcohol, amphetamines, barbiturates, benzodiazepines, cocaine, methaqualone, and opioids, which may lead to criminal penalties as well as physical, social, and psychological harm, also called "substance abuse" (See Wikipedia)

addiction (noun) -a continued involvement with a substance or activity even after bad things start happening from that involvement, over a period of time involvement with the substance or activity is needed to feel normal, in addition to "drug addiction" includes "abnormal psychological dependency on such things as gambling, food, sex, pornography, computers, internet, work, exercise, idolizing, watching TV or certain types of non-pornographic videos, spiritual obsession, self-injury and shopping" (See Wikipedia)

addict (noun) -a person with an addiction to something, a person who cannot do without something bad (such as drugs, sex, etc)
drug addict - a person who needs harmful drugs, cannot live without them

running with a crowd of friends experimenting with crystal methamphetamine

drug rehabilitation - the process of medical and psychological treatment of addiction to drugs such as cocaine, heroin or amphetamines and enable the patient to avoid the psychological, legal, financial, social, and physical consequences of an addiction (jail, life of crime, loss of family and friends, HIV/AIDs from dirty needles, etc) (See Wikipedia)
rehab - same as "rehabilitation"

reintegrate into society - get a job, and have a normal family and friends again (drug addicts often lose these, because of their harmful behaviors)
household - a group of people, often a family, who live together in an apartment or home ครัวเรือน
fix household appliances - repair things used in the kitchen and house such as refrigerator, air conditioner, etc ...

realised - came to understand; arrive at an understanding
no charge - free

base - a group of people involved in an activity (example: the companies customer base is growing and likely to grow more.)
patient base - the patients at medical treatment facility (hospital, rehab center, etc)

swell - to become larger than normal; increase in size or number จำนวนมาก
patient base of drug addicts is likely to swell

prides itself on - they are very good at doing something (and proud of this)
deliberate - done intentionally; done on purpose จงใจ ตั้งใจ
pace - the speed and rhythm at which something happens ท่างทำนอง ย่างก้าว จังหวะ ที่สิ่งต่างๆ ดำเนินไป (See glossary)

nationwide - throughout a whole country ทั่วทั้งประเทศ

pledged - seriously promised to do something สาบาน

severity of a patient's addiction - strength of addiction, how much the patient cannot go without drug

participants - people joining together in an activity

voluntary - choosing to do it, doing it because you want to ด้วยความสมัครใจ
involuntary - being forced or made to do something (not choosing and maybe not wanting to do it; must do, required)

therapy - a treatment which helps someone feel better, grow stronger, etc., especially after an illness การบำบัดโรค
workshops - when a group of people meets together to discuss or get practical experience in some area การประชุมเชิงปฏิบัติการ

hooked - addicted; finding something so interesting or attractive that you want to do it as much as possible ติดใจ ตกกระไดพลอยโจน
hooked on speed pills - took speed all the time and could not stop taking them (addicted to them)

monitor - watch carefully what is happening, to make sure everything goes well เฝ้าระวัง
monitored regularly - check continually (every few weeks, for example)

awareness - the state of knowing about something การรับรู้, การทราบ
raise awareness - help people know more about some important subject or problem

victims - people who are or harmed in some way from an accident, natural disaster, crime, etc.