Tame farm crocodiles are actually afraid of people, but in the wild they are known for striking before their victim can react. 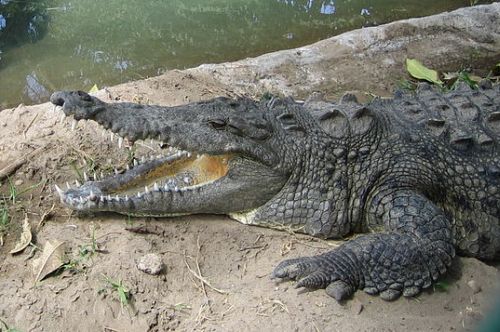 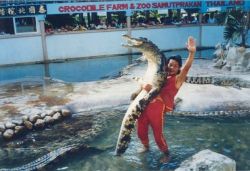 With about 100 crocodiles escaping from a flooded farm in Uthai Thani province, the Wildlife and Plant Conservation Department has sought to calm fears that the animals may attack people.

It says crocodiles raised in captivity have no instinct to attack humans.

Thirapat Prayoonsit, the department's deputy chief, said most of the escaped crocodiles are young and less than a metre long. They prefer to live in still water and avoid strong currents. However, to calm fears, the department will cooperate fully with the Fishery Department in efforts to catch the crocodiles.

"Please do not panic. The crocodiles are not fierce like those living in the wild. On the contrary, they are rather scared of people," said Mr Thirapat.

The crocodiles escaped on Sunday when Crocodile Farm Uthai Thani was inundated with floodwater.

The farms are ready to buy the crocodiles at 3,000 baht each.

There are about 30 crocodile farms countrywide, plus 900 small crocodile breeding operators. Thailand is considered the world's biggest crocodile breeder, with more than 200,000 crocodiles in captivity nationwide, according to the department.

The Wildlife and Plant Conservation Department tried to evacuate five tigers living in Crocodile Farm Uthai Thani yesterday but three of them drowned. The other two were moved to a wildlife centre in Ratchaburi province.

She added that most of the animals are suffering from water-borne diseases and need the help of experts.

People who wish to donate money to help protect flood-endangered wildlife can contact the faculty of veterinary science at Chulalongkorn University on 02-251-8887.

Crocodiles in the Floodwater Vocabulary

crocodile - "crocodiles are ambush hunters, waiting for fish or land animals to come close, then rushing out to attack. As cold-blooded predators, they have a very slow metabolism, and thus can survive long periods without food. Despite their appearance of being slow, crocodiles are top predators in their environment ... The larger species of crocodiles are very dangerous to humans. The main danger that crocodiles pose is not their ability to run after a person but their ability to strike before the person can react. The saltwater crocodile and Nile crocodile are the most dangerous, killing hundreds of people each year in parts of south-east Asia and Africa.... Crocodiles are protected in many parts of the world, but they also are farmed commercially. Their hide is tanned and used to make leather goods such as wallets, briefcases, purses, handbags, belts, hats, and shoes ... Crocodile meat is consumed in some countries, such as Australia, Ethiopia, Thailand, South Africa and also Cuba (in pickled form); ... The meat is white and its nutritional composition compares favourably with that of other meats. It tends to have a slightly higher cholesterol level than other meats. Crocodile meat has a delicate flavour; some describe it as a cross between chicken and crab" (See Wikipedia)

crocodile farm - a farm that breeds and raises crocodiles to produce meat, leather, and other goods, as well as serving as a tourist attraction (See Wikipedia)

crocodile hunters - a very dangerous job, the most famous crocodile hunter Steve Irwin died in 2006 after being pierced in the chest by a stingray barb
crocodiles in sewers - an urban legend about crocodiles in New York's sewers that dates back to the 1920s and 30s, what Bangkok urban legends might arise from crocodiles in flood waters is too early to tell (See Wikipedia)
urban legend - modern folklore or legends, stories passed from person to person by word of mouth, "urban legends are sometimes repeated in news stories and, in recent years, distributed by e-mail. People frequently allege that such tales happened to a 'friend of a friend' -- so often, in fact, that 'friend of a friend,' ("FOAF") has become a commonly used term when recounting this type of story. ... One example is the story of a woman killed by spiders nesting in her elaborate hairdo. More recent legends tend to reflect modern circumstances, like the story of people ambushed, anesthetized, and waking up minus one kidney, which was surgically removed for transplantation" (See Wikipedia)

captivity - being kept in an enclosed area (such as an "animal in a cage" or a human in a prison"); not living in "the wild"
raised in captivity - from the time it was a small baby, lived with humans, not in "the wild"

wildlife conservation -  "the preservation, protection, or restoration of wildlife and their environment, especially in relation to endangered and vulnerable species. All living non-domesticated animals, even if bred, hatched or born in captivity, are considered wild animals. Wildlife represents all the non-cultivated and non-domesticated animals living in their natural habitats. Our world has many unique and rare animals, birds and reptiles. However the pressure of growing population in different parts of the world has led to the increasing need of using land for human habitations and agriculture. This has led to the reduced habitat of many wild animals" (See Wikipedia)
wildlife centre - a special centre involved in "wildlife conservation" activities

flood-endangered wildlife - wild animals that may die in the flood, if no one helps them
endangered - at risk or in danger of being harmed, damaged or destroyed เป็นอันตราย

veterinarian - a person with a medical degree trained to take care of the health of animals สัตวแพทย์
vet - same as "veterinarian" (short form)
veterinary - veterinary medicine, relating to the care of animals that are ill or injured (See Wikipedia)

suffering - physical or mental pain or problems ความทุกข์ทรมาน
borne - carried ถือ หรือนำไป (อัญเชิญ ประดิษฐาน)
water-borne diseases - diseases that people and animals get from contact with water (the bacteria, viruses or amoeba living in the water)

still water - water that is not moving, staying in one place
strong currents - when the water in a river or the sea is moving quickly in one direction

contrary - opposite, does not agree ทางตรงกันข้าม

source - the place or person something comes from or starts at, or the cause of something ต้นกำเนิด, แหล่งกำเนิด

evacuate - to be forced to leave an area; to leave a place because it is not safe ถูกไล่ที่ อพยพออกจากพื้นที่ เคลื่อนย้ายออกจาก

donate - to give something such as money or goods to an organisation, especially to a charity, school, political party, etc. บริจาค