Incomes of poorest & richest have risen quickly in the past, economic pressures on Thai lower middle class now the real problem.

Map above shows differences in national income equality around the world as measured by the national Gini coefficient. A higher Gini coefficient means that a country has higher income inequality (Source: Wikipedia).

Photo below of some of the 2,500 factory workers at a furniture factory in Chachoengsao many of whom would qualify as lower middle class (Photo: Sontanaporn Inchan)

TDRI: Income gap to widen without change, Lower middle-class fails to catch up by Parista Yuthamanop 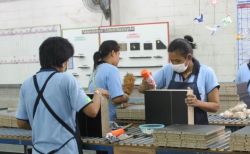 Lower middle-class Thai workers have much difficulty catching up with the group above them, notes an economist from Thailand Development Research Institute.

Somchai Jitsuchon, TDRI's research director for macroeconomic development and income distribution, said the country's highest-earning group is benefitting from increased interconnectedness in the world via technology, while the poorest group had seen their income rise quickly in the past as well.

Lower middle-income earners haven't been able to catch up with the rich and are being squeezed by the lower-income group. While they still stand to benefit from technology and globalisation, corruption is compounding their problem," he said.

Dr Somchai said academics call the widespread trend the "missing middle". The trend could explain social and political discontentment in many countries, including Thailand.

Some members of this group just emerged from poverty and have secondary school educations, earning the majority of their incomes from their labour.

"The lowest bracket of the middle-income group feels the most pressure about their future," he said.

In Thailand, the richest 20% make almost 60% of the income, the highest among Indonesia, Laos, Malaysia, the Phillippines and Vietnam in 2009. In addition, the poorest 20% garnered only 4% of the income, also the lowest among the group

He said Thailand fared poorly on its income gap compared to other countries, on par with troubled Latin American countries like Mexico, Argentina and Columbia.

In a study for the National Economic and Social Development Board, Dr Somchai found policymakers should tailor policies to reduce the distortion of each specific income group.

Policies for the top 1% of earners should focus on reducing monopolies and corruption, and make sure to include the top earners more fully in the tax base.

The next 24%, upper middle-income earners, should receive better public service in skills training, enhancing innovation and tax reform. The government should focus on quality of education and universal social welfare for the next 35% of earners. Access to higher education, intermediate skill training, political participation and welfare should be the goal for lower middle-income earners, the next 35% tax bracket.

Policies for the lowest 5% of earners should focus on quality of and access to higher education, increased welfare and equal social and political treatment.

"Steps to achieve inclusive growth should be seriously considered, in addition to populist policies, to reduce the income gap," Dr Somchai said. "If populism can reduce the income gap, we can eventually abandon it. But if it doesn't, then we will be stuck with it forever as politicians will continue to use it for political favours. The fiscal burden will become unbearable.

He noted the income gap decreased during the first three decades of the country's development under the national economic plan.

But this is a major task, requiring getting rid of monopolies and corruption and improving public trust in political institutions, he said

income inequality - differences in income between the rich and the poor in a country, measured in different ways (See Wikipedia List of Countries)

income - money that people receive from work or some other source, used for household consumption and savings
income distribution -  how the income from a country's economy is spread or distributed among the population with some being rich, some poor, and some in the middle (See Wikipedia)

missing middle - the global situation where "increases in wages fail to keep up with inflation for middle income earners... Persons belonging to the middle class find that inflation in consumer goods and the housing market prevent them from maintaining a middle class lifestyle, making downward mobility a threat to counteract aspirations of upward mobility. In the United States for example, middle class income is declining while many staple products are increasing in price, such as energy, education, housing, and insurance...Being middle class used to mean having a reliable job with fair pay; access to health care; a safe and stable home; the opportunity to provide a good education for one’s children, including a college education; time off work for vacations and major life events; and the security of looking forward to a dignified retirement. But today this standard of living is increasingly precarious. The existing middle class is squeezed and many of those striving to attain the middle-class standard find it persistently out of reach," also called "the middle class squeeze" or "shrinking middle class" (See Wikipedia)

academics - professors and lecturers at universities and colleges
widespread - happening or existing in many places, or affecting many people อย่างแพร่หลาย
trend - a gradual change or development that produces a particular result ทิศทาง แนวโน้ม
academics call the widespread trend the "missing middle".

catch up - when one person is behind in a race and runs harder to get in front
lower middle-class fails to catch up - meaning: they try hard to make more money and do better, but they can't
lower middle-income earners haven't been able to catch up with the rich and are being squeezed by the lower-income group

emerged - come into being; appeared ปรากฏออกมา ปรากฏให้เห็น โผล่ออกมา
poverty - the condition of being extremely poor ความจน
just emerged from poverty

majority - more than half, more than 50%, most of  ส่วนมาก เสียงส่วนมาก
earning the majority of their incomes from their labour - most of their income and earnings come from manual labour (in a factory, for example)

pressure - stress, cannot live comfortably (difficult decisions must be made) ความกดดัน ความตึงเครียด
"The lowest bracket of the middle-income group feels the most pressure about their future

fared - come through a situation; was successful / unsuccessful in a particular situation
fared poorly - did not do well, not good compared to others
fared poorly on its income gap - has a bad income gap (big separation between rich and poor)

on par with - the same as, equal to
troubled - has problems

focus - think about and work on one thing, concentrate time and attention on one thing ให้ความสำคัญ
corruption - (See Wikipedia on bribery, and political corruption)
focus on reducing monopolies and corruption
tax base - the people and companies who pay taxes and the taxes they pay (the main source of government revenue) make sure to include the top earners more fully in the tax base

reform - improvements in the way government or an organization operates; a change that is intended to correct a situation that is wrong or unfair การแก้ไข การปฏิรูป
tax reform - making changes to the tax system to improve it

universal - involving everyone ทั่วไป
welfare - 1. good health and happiness; living in good conditions (with health, wealth, and happiness) ความสะดวกสบาย, ความมีสุขภาพดี ; 2.help given, especially by the state or an organization, to people who need it; good care and living conditions สวัสดิภาพ
universal social welfare

higher education - university education, going to college
access - the right or opportunity to have or use something ได้รับสิทธิ์หรือโอกาสในการใช้
access to higher education

populism - government policies that claim to help the poor (whether they actually do or not is a big question) (See Wikipedia)
populist - a politician who claims to care about the interests and opinion of ordinary people
populist policies, to reduce the income gap

If populism can reduce the income gap, we can eventually abandon it. But if it doesn't, then we will be stuck with it forever as politicians will continue to use it for political favours.

fiscal - related to government spending; connected with the government budget, i.e., public money เกี่ยวกับงบประมาณ
burden - a serious or difficult responsibility that you have to deal with ภาระ , a heavy load to carry (See glossary)
fiscal burden - the difficulty of paying for government spending when it becomes very big

unbearable - too painful or unpleasant for you to continue to experience ซึ่งไม่สามารถทนได้, ซึ่งทนไม่ไหว, ซึ่งเหลืออด
the fiscal burden will become unbearable

aggressively - done with great energy and intensity
implemented - when a plan is put into action, actually doing the things in a plan
aggressively implemented populist policies

trust - believes that someone will do as they promised, when people have confidence in each other (so they can work together effectively) a situation in which someone is made responsible for another person or thing ความเชื่อมั่น
institutions - 1. customs and traditions ระบบหรือประเพณีนิยม; 2. large and important organizations, such as universities or banks สถาบัน