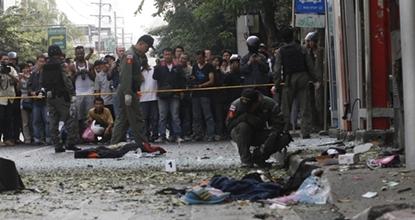 The bombs that exploded in Bangkok yesterday were intended for "foreign nationals" in Thailand, national police chief Priewpan Damapong said. 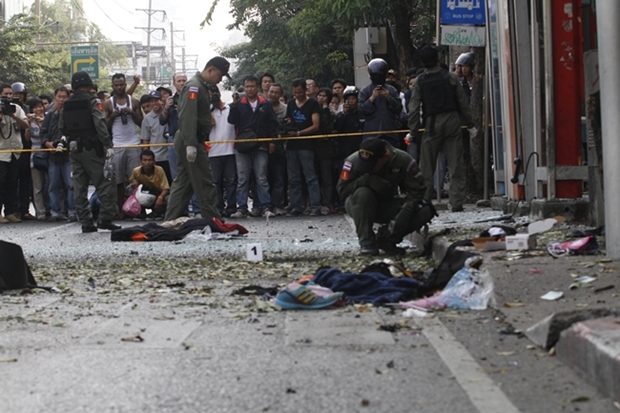 The bombs that exploded in Bangkok yesterday were intended for "foreign nationals" in Thailand, national police chief Priewpan Damapong said.

He did not give further details but said only that the targets were not Thais.

The blasts injured five people including a bomb suspect carrying an Iranian passport who blew off his own legs.

Another Iranian suspect was arrested at Suvarnabhumi airport hours after the incident as he was about to leave for Malaysia. He is one of three suspects thought to be involved. 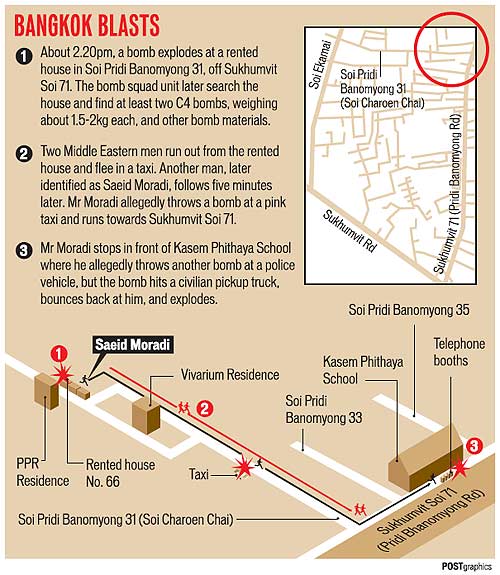 The United States and the United Kingdom yesterday reissued their travel warning for their nationals in response to the blasts.

Mr Barak was quoted in The Jerusalem Post as saying the bomb blasts were part of an attempted terrorist attack perpetrated by Iran.

"The attempted terror attack in Thailand proves once again that Iran and its proxies continue to operate in the ways of terror and the latest attacks are an example of that," Mr Barak said while on a state visit to Singapore.

The incident came one day after near simultaneous attacks on Israeli diplomats in Georgia and India. Israel pointed the finger at Iran for the attacks but Teheran denied responsibility.

Two explosions were heard shortly after one another around 2.20pm between soi Pridi Bhanomyong 31-35 off Sukhumvit 71 Road.

A passport found at one of the blast sites identified the severely injured man at the scene as Saeid Moradi, 28, from Iran.

The suspect reportedly threw a grenade at a taxi in Pridi Bhanomyong Soi 31 after the taxi driver failed to stop to take him.

He ran away from the scene to the front of Kasem Phithaya school on Sukhumvit 71 Road and allegedly hurled a box packed with explosives at a police patrol vehicle which was heading towards him.

The device hit a passing pickup truck, bounced back, fell next to him and exploded. 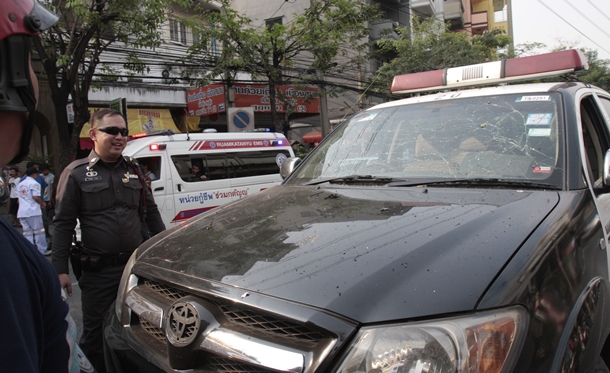 A policeman and his patrol vehicle on Sukhumvit Soi 71, apparent targets of the suspected bomber Saeid Moradi. KOSOL NAKACHOL

Police later arrested another of the remaining suspects at Suvarnabhumi airport about 6.20pm. The man, identified as Mohummad Hazaei, 42, is holding an Iranian passport, Metropolitan Police chief Winai Thongsong said. Mr Hazaei was due to board an Air Asia flight to Malaysia.

Mr Hazaei refused to give testimony to the police and asked for a translator, Pol Lt Gen Winai said.

Pol Gen Priewpan yesterday said an investigation found Mr Hazaei arrived in Thailand on Feb 8 on the same flight as Mr Moradi and another suspect who is on the run. The three came from Malaysia and landed in Phuket.

Police searched the two-storey house where the first explosion took place and found about 4 kilogrammes of C4 explosives planted in two radio receivers. Pol Lt Gen Winai said they are the same type as the three bombs which exploded at the rented house, a taxi, and in front of the school. A bomb squad source said each bomb could cause serious damage in a 40m radius. The source said such bomb-making methods had never been found in Thailand before.

You can read the full story here: http://bit.ly/yu8w8q

bystander – a person who is standing near and watching something that is happening but is not taking part in it ผู้เห็นเหตุการณ์, ผู้สังเกตการณ์
bomb disposal – getting rid of bombs or making bombs harmless การเก็บกู้ระเบิด
site – a place where something happened  ที่เกิดเหตุ
blast – an explosion การระเบิด
rock – to shock, surprise, or frighten someone ทำให้ตกใจ, ทำให้สั่นสะเทือน
intended – planned; wanted to happen  ที่ได้วางแผนไว้ ที่ตั้งใจให้เกิดขึ้น
details – small facts or pieces of information relating to a situation รายละเอียด
target –a person, business, building, area, etc., that someone intends to attack เป้าหมาย
suspect – a person who is thought to have committed a crime ผู้ต้องสงสัย
arrested – caught by the police and taken to a police station because you are believed to have committed a crime ถูกจับกุม
incident – something that happens, usually something bad เหตุการณ์
involved – taking part or having a role in something เกี่ยวข้อง
issue – to announce something officially ออกประกาศ
reissue – to announce something again
response – a reaction to something that has happened or been said การตอบสนอง
quote – to repeat the words that someone else has said or written ยกคำพูดมา
terrorist – of someone who uses violence in order to  achieve political aims ผู้ก่อการร้าย
perpetrated – did something harmful, illegal or dishonest ทำเรื่องเลวร้าย
terror – violence used for making people very frightened in order to achieve political aims การก่อการร้าย  การสร้างความหวาดกลัว
proxy – a person or group who acts for another person, group, country, etc. ตัวแทน
operate – to carry out an activity ดำเนินการ
state – government รัฐบาล
incident – something that happens, usually something bad เหตุการณ์
simultaneous – happening at the same time ในเวลาเดียวกัน,ที่พร้อมกัน
diplomat – an official whose job is to represent their government in a foreign country นักการทูต
deny – to say that you did not do something that someone has accused you of doing ปฏิเสธ
responsibility – deserving to be blamed for something that has happened ความรับผิดชอบ
identified – named  ระบุชื่อ
severely – very seriously อย่างรุนแรง
reportedly – as reported (often used for showing that you are not certain that something you are reporting is true) ตามที่รายงาน
grenade – a small bomb that someone throws or fires from a gun ลูกระเบิดเล็ก
allegedly – claimed to have done something wrong, but not yet proven ที่กล่าวหา
hurl – to throw something using a lot of force  เขวี้ยง ขว้างปา
patrol – to move regularly around a place in order to prevent trouble or crime ลาดตระเวน
device – a machine or piece of equipment that does a particular job อุปกรณ์ เครื่องมือ เครื่องจักร
bounce – to move quickly away from a surface that an object has just hit กระเด้งจาก, เด้งจาก
due to – scheduled to มีกำหนด
refuse – to say you will not do something that someone has asked you to do ปฏิเสธ
testimony – a formal statement about something that you say, know or experienced, usually given to a court of law คำให้การ
translator – a person who translates writing or speech into a different language, especially as a job ล่าม, นักแปล, ผู้แปล
investigation – the process of trying to find out all the details or facts about something การสอบสวน
search – to look somewhere carefully in order to find something ค้นหา
plant – (of an explosive) to hide in a place where it can be exploded ฝัง
rent – to pay money for the use of something for a period of time  เช่า
squad – a small group of police or soldiers who do a particular job หน่วยพิเศษ
source – someone who gives information แหล่งข่าว
radius – a particular distance in all directions from a central point รัศมี