Quitting job at largest bank in US to guide family property business back in Bangkok, today he shares his real estate development know-how with readers. 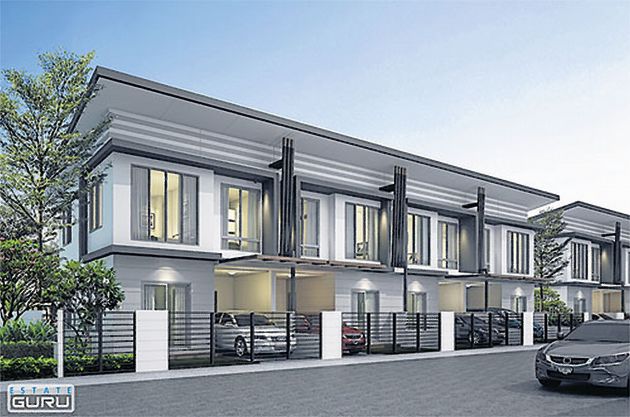 Property firm Estate Guru Co, run by a former financier at JPMorgan Chase & Co in the US, plans to launch four new projects worth a combined 1 billion baht next year.

The Wizdom project will comprise 73 townhouses priced at 1.69 million baht to 2.45 million baht.

The company will also launch a project on a 7-rai site on Soi Petchkasem 53 this year, said chief executive Nat Manasomjit, who resigned from JPMorgan Chase New York in the third quarter last year to join his family's property business.

He said construction of the Blue Line had increased land prices on Phetkasem Road from 90,000-100,000 baht per square wah, stable for many years, to 150,000-230,000 baht after mass transit construction started.

The project, Wizdom, worth 150 million baht, will comprise 73 townhouses priced at 1.69 million baht to 2.45 million baht. Its targeted net margin will be 20%.

While shophouses generate higher net margins as high as 35% and are easy to develop and sell, finding suitable plots is much more difficult, he said...

..."To be successful in the property business, you need to find just the right location, while the other factors are uncontrollable," he said...

...Unlike other large developers that use prefabrication, Estate Guru will use red brick to build townhouses as that will allow owners to build extensions...

Mr Nat is also in talks with a Singaporean private fund about a joint venture for a townhouse development in the Ram Intra area. The fund has invested in condominiums in Singapore and is looking for new investments, while Mr Nat needs its know-how for pushing for a listing on the stock market.

JPMorgan Chase & Co - "an American multinational banking corporation of securities, investments and retail. It is the largest bank in the United States by assets. It is a major provider of financial services, with assets of $2 trillion and according to Forbes magazine is the world's second largest public company based on a composite ranking" (See Wikipedia)

fund - 1. an investment fund; a large amount of money to be invested; 2. money provided for some special purpose เงินทุน กองทุน
fund manager

plans to launch four new projects worth a combined 1 billion baht next year.

comprise - to consist or be made up of two or more things ประกอบด้วย
the project will comprise 73 townhouses priced at 1.69 million baht to 2.45 million baht.

construction - the work of building or making something, especially buildings, bridges, etc. การก่อสร้าง
construction of the Blue Line

mass - large numbers จำนวนมหาศาล
transit - the act of moving from one place to another การเดินทางผ่าน
mass transit - buses, trains, ferry boats and other ways to move large numbers of people around town

net margin - profit margin, profit as a percentage of sales, a company's income divided by sales, a measure of how efficiently the company is run and how successful its price levels are (See Wikipedia)

targeted - 1. chosen, made as a goal or thing you are aiming at or trying to achieve; 2. aiming weapon or gun at something to shoot it ตกเป็นเป้า ตั้งเป้า เล็ง มุ่ง

shophouses - the building you see most often on the streets of Bangkok, with a shop on the first floor, and a living area on the floors above ร้านค้า

suitable - right for a situation; right for someone or something เหมาะสม
plots - pieces of land

the other factors are uncontrollable," he said...

talks - negotiations, formal discussions of problems between different sides in a conflict in order to solve the problem
in talks with

joint - done with someone else ร่วมกัน
venture - a new activity, usually in business, which involves risk or uncertainty ธุริกิจเสี่ยงแต่สามารถทำกำไรได้
joint venture - a business owned and operated by two or more companies
know-how - knowledge, knowing how to do something pushing for - trying to get something (or make something happen)