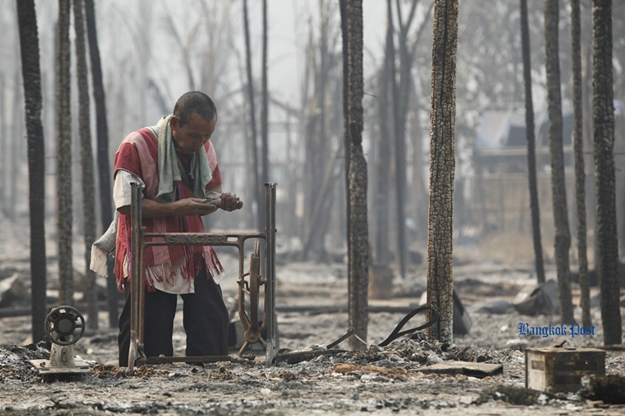 In the midst of the destruction in the Mae Surin refugee camp, a man looks to see if an old Singer sewing machine can be salvaged. THITI WANNAMONTHA.

Witnesses say fire not an accident

The district police chief was transferred, pending an investigation, to an inactive post at Mae Hong Son provincial police office on Monday for alleged negligence in his handling of Friday's disaster in Mae Hong Son's Khun Yuam district. He was also removed from the blaze investigation team.

However, Pol Col Nitinart says he is being punished because he refuses to confirm the deadly fire was an accident.

Friday's fire that killed 37 Karen and Karenni refugees injured over 100 and left more than 2,300 homeless. The camp is home to about 3,000 people.

Authorities have so far been unable to determine the cause of the blaze.

Police initially suspected that the fire started in a kitchen. Another theory is that embers from a nearby forest fire blown by the wind could have landed on the thatched roof of a refugee house.

Pol Col Nitinart Tuesday said he had spoken to witnesses before he was removed from the case and said their accounts led him to believe the fire started inside the camp and was not an accident. He stopped short of saying what he believed caused the fire.

"I have extensively questioned the witnesses and I don't think the fire was an accident," Pol Col Nitinart said.

The transfer order was signed by Mae Hong Son police chief Sompong Chingduang, citing Pol Col Nitinart's alleged dereliction of duty when the fire broke out. But Pol Col Nitinart believes the real reason behind the transfer was because he refused to conclude that the fire was an accident.

"Based on my interrogations and fire scene investigations, I could not come to such a conclusion [that the fire was an accident]," Pol Col Nitinart told the Bangkok Post. "Talk to anyone at the camp, ask them what they saw, and you will know how the fire started," he said.

A police investigation source who questioned Mae Surin refugees said several witnesses claimed they saw a helicopter flying above the camp minutes before the fire broke out. 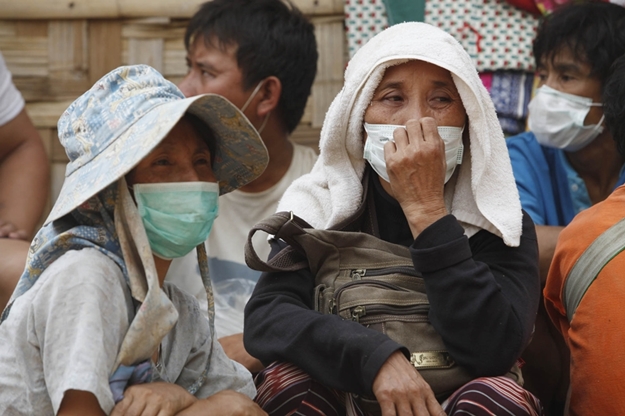 Some refugees reported seeing a burning object being dropped out of a helicopter. THITI WANNAMONTHA.

They also reported seeing a burning object dropped from the helicopter on to the roof of a house in Zone 1.

A source from the Office of Aviation for Natural Resource Conservation said none of the office's helicopters had flown above the camp that day. However, he could not confirm if anyone else had flown helicopters over the site.

in the midst of – in the middle of ท่ามกลาง
refugee – someone who leaves their country or living place, especially during a war or other threatening event ผู้ลี้ภัย
salvage – to save something from being lost completely กอบกู้
blaze – a large fire that cause a lot of damage เพลิง
victimise – to make somebody suffer unfairly because you do not like them, their opinions, or something that they have done ทำให้เป็นเหยื่อ
witness – a person who sees something happen  ผู้ที่เห็นเหตุการณ์
ravage – to destroy something or damage it very badly ทำให้เสียหาย, ทำลาย, ล้างผลาญ
embattled – experiencing a lot of problems ที่ถูกโจมตี
claim – to say that something is true although it has not been proved and other people may not believe it อ้าง
transfer – to change someone’s job or responsibilities โยกย้ายตำแหน่ง
pending – waiting to be dealt with, settled or completed ยังค้างอยู่, ซึ่งยังไม่จบสิ้น, อยู่ในระหว่าง
investigation – the process of trying to find out all the details or facts about something in order to discover who or what caused it or how it happened การสอบสวน, การตรวจสอบหาข้อเท็จจริง
inactive post – a job or position with no real responsibilities or duties
alleged – claimed to be true although not yet proven ที่ถูกกล่าวหา
negligence – when you do not give enough care or attention to someone or something ความประมาท, ความไม่เอาใจใส่
disaster – an unexpected event, such as a very bad accident, a flood or a fire, that kills a lot of people or causes a lot of damage ภัยพิบัติ ความหายนะ
remove – to take something away เอาออกจาก
injured – hurt in an accident or attack ซึ่งได้รับบาดเจ็บ
authorities – people who have the power to make decisions or enforce the law เจ้าหน้าที่ผู้มีอำนาจ
determine – to officially find out or decide something  ตัดสินใจ  ชี้ขาด
initially – at first ในเบื้องต้น
suspect – to believe that something is true, especially something bad  สงสัย
theory – one or more ideas that explain how or why something happens สมมติฐาน
ember – a piece of wood that is still hot and red from a fire  ถ่านที่ยังคุอยู่
thatch – dried straw, reeds, etc. used for making a roof; a roof made of this material  หลังคาใบจาก
account – a written or spoken report about something that has happened การอธิบาย
stop short of saying – to not say, i.e., he stopped before saying
extensively – in considerable detail; thoroughly อย่างกว้างขวาง
dereliction of duty – a serious failure to do the things that you are responsible for in your job การละทิ้งหน้าที่
conclude – to decide that something is true after looking at all the evidence you have สรุป
interrogation – asking someone a lot of questions in order to get information การสอบถาม, การซักถาม
scene – site; a place where something happens or happened สถานที่เกิดเหตุ
source – a place where information comes from; someone who gives information แหล่ง
aviation – the flying of aircraft การบิน
natural resources –  things such as coal, trees, wildlife and oil that exist in nature and can be used by people ทรัพยากรธรรมชาติ
conservation – the protection of plants and animals, natural areas, and interesting and important structures and buildings, especially from the damaging effects of human activity การอนุรักษ์ธรรมชาติ, การป้องกันความสูญเสีย, การสงวนไว้
site – a place where something happened  ที่เกิดเหตุ