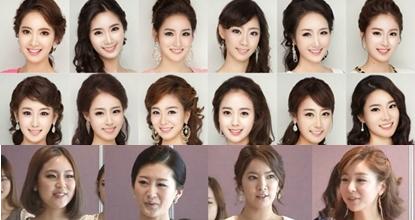 A video shows that those Korean beauty contestants whose faces were thought to be almost identical through plastic surgery, do not really look alike after all. 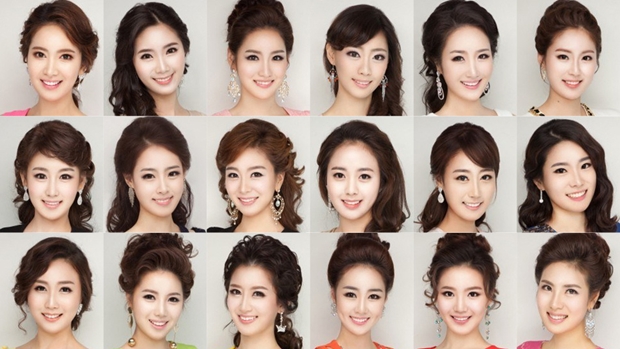 The remarkably similar photos of contestants of a Korean beauty contest that spread around the internet this week. But are they really so similar in real life?

This was first published in April, 2013. It is still fun to read.

Not so look-alike after all.

The case of the look-alike Korean beauty contestants may not be what it seemed at first.

Photoshop, not plastic surgery, may be the reason that photos of contestants  of the Miss Korea beauty contest ended up looking so eerily alike.

For the social media, however, plastic surgery is a more interesting explanation and that is what spread around the web this past week. Supposedly Korean women aspire to a certain standard of beauty and local plastic surgeons are extremely adept at satisfying their wishes.

Screenshots from a video which shows the contestants as they really look. (You can see the video below)

It is true that plastic surgery is popular in South Korea. According to one estimate, in 2011 13 million operations were performed on a population of just 50 million. But the women in the photos were so similar, that some fact-checking seems in order.

Brian Ashcroft, writing for online magazine Kotaku (http://bit.ly/ZBPQHP) has done the job for us. The contestants, he found, are actually competing in the Miss Daegu contest, a preliminary round of the Miss Korea contest, i.e., the winner of the contest goes on to compete in the national beauty pageant.

He also found video showing the contestants as they actually look, bearing very little resemblance to the photos being shared on the internet.


"The assumption now," he says, "is that the contestants wore their make-up in a similar style and, more likely, the same person Photoshopped the contestants. That would explain why all their smiles and faces are incredibly similar."

This Youtube video would seem to support that contention. Notice the remarkable and unnatural similarities as one face merges into the next.

adept (adjective): good at doing something that is quite difficult - ชำนาญ

aspire : to want to achieve something or to be successful - ตั้งปณิธาน

assumption : something that you consider likely to be true even though you have no proof - ข้อสันนิษฐาน

bear : to show something; to carry something so that it can be seen - แสดง

bear resemblance to : to look very much/somewhat like something else -

beauty pageant : a competition to choose the most beautiful from a group of women - ประกวดนางงาม

contention : a belief or an opinion that you express, especially in an argument - ความคิดเห็นในการโต้แย้ง

incredibly : in a way that is difficult to believe - อย่างไม่น่าเชื่อ

merge (verb): to join two or more things together into one thing; combine, integrate - รวม, รวมเข้าด้วยกัน

operation : the process of cutting open a part of a person's body in order to remove or repair a damaged part - การผ่าตัด

plastic surgery : medical operations to repair injury to a person's skin, or to improve a person's appearance - ศัลยกรรมตกแต่ง

preliminary : an early part of a competition happening before the finals; an event or action that introduces or prepares for something else - ขั้นต้น, ขั้นแรก

social media : the use of web-based and mobile technologies to turn communication into an interactive dialogue, e.g., Facebook, Twitter, etc. - เครือข่ายสังคมออนไลน์