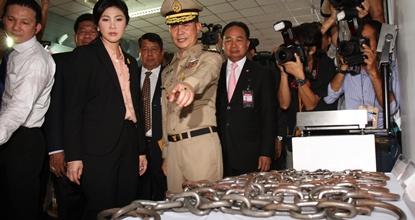 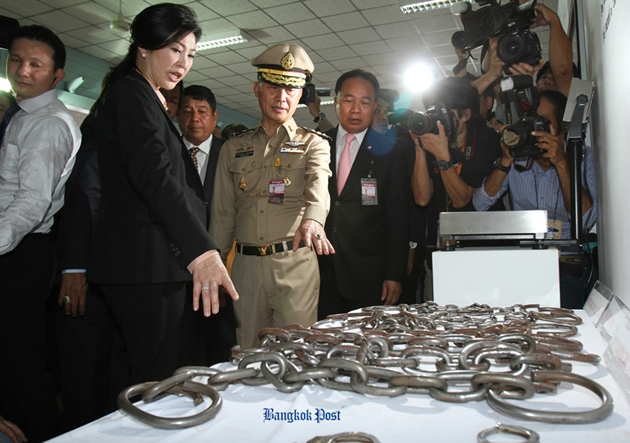 Inmates are freed of their shackles after Prime Minister Yingluck Shinawatra presided over a ceremony to unchain prisoners on death row at Bang Khwang Central Prison yesterday. Of 800 prisoners, 563 inmates with a record of good behaviour were unshackled at the event. TAWATCHAI KEMGUMNERD

Corrections Department chief Suchart Wonganantachai said 563 prisoners have been unchained since the campaign started on Jan 23.

All prisoners across the country are expected to be unchained within three months. 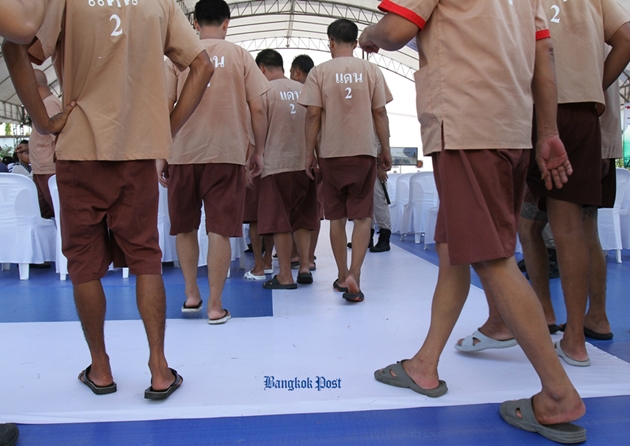 Prisoners get used to walking freely without shackles. TAWATCHAI KEMGUMNERD

Those unshackled include former gynaecologist Wisut Boonkasemsanti, who killed his wife and dissected her body in 2001; Maj Chalermchai Matchaklam, who was involved in the killing of a Yasothon governor in 2001; and former senator Sukum Cherdchuen who hired gunmen to murder a Chulalongkorn Hospital doctor in 1996.

Dr Wisut said that he was delighted to be unshackled.

"Being chained made us feel like we were wicked animals and eroded our morale," Dr Wisut said.

"Removing the shackles will not affect the warders' ability to control inmates. On the contrary, it will make inmates more willing to cooperate."

Dr Wisut said he was chained for four years. He still has 17 years and one month left to serve of his sentence.

inmate – someone who is kept in a prison, mental hospital or other institution ผู้ถูกกักกัน, ผู้ถูกกักบริเวณในเรือนจำหรือโรงพยาบาล
shackles – a pair of connected metal rings that can be locked onto the wrists or legs of a prisoner โซ่ตรวน
preside – to be in charge of a ceremony, official meeting, or other event  เป็นประธานในพิธี
death row – the cells in a prison for prisoners who are waiting to be killed as punishment for a serious crime  สถานกักกันนักโทษประหาร
high-security – (of a prison) heavily guarded
right – something that you are morally or legally allowed to do or have สิทธิ
Corrections Department – the government department in charge of running prisons กรมราชทัณฑ์
serve a jail term – to spend time in prison as a punishment มารับโทษจำคุก
gynaecologist – a doctor who studies and treats the medical conditions and diseases of women  นรีแพทย์,แพทย์ผู้ชำนาญโรคสตรี
dissect – to cut up a dead person, animal or plant, usually in order to study it ชำแหละคน สัตว์หรือพืช
senator – a member of the Senate  วุฒิสมาชิก
hire – to pay someone to work for you, especially for a short time จ้าง
murder – to commit the crime of killing someone deliberately ฆาตกรรม, สังหาร
delighted – very happy or satisfied about something ยินดีมาก,สุขใจ
wicked – morally bad ชั่วร้าย
erode – to rub or be rubbed away gradually กร่อน, กัดกร่อน
morale – the amount of confidence and enthusiasm, etc. that a person or a group has at a particular time กำลังใจ, ขวัญ
remove – to take something away เอาออกจาก
warder – someone whose job is to guard prisoners in a prison ผู้คุม
on the contrary – opposite; completely different or opposed to something else ในทางตรงกันข้าม
willing – to be happy to do something if it is needed ซึ่งสมัครใจ, ซึ่งมีความตั้งใจ
cooperate – to work with other people to achieve a result that is good for everyone involved ร่วมมือกัน
sentence – a punishment given by a court of law การตัดสินลงโทษ