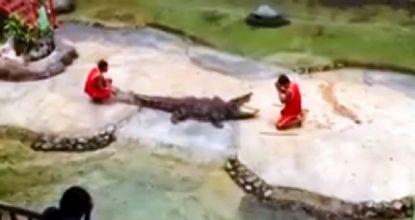 After 8 years of sticking his head in crocodile mouths, makes mistake & barely lives to tell about it.

Crocodile trainer with 8 years of experience pays respect to crocodile before putting his head in his mouth and slipping.

A trainer at a popular tourist crocodile farm in Samut Prakan was lucky to escape serious injury when one of the reptiles snapped its jaws shut while his head was inside its mouth. The incident was caught on camera and posted online.

Uthen Youngprapakorn, owner of the Samut Prakan Crocodile Farm and Zoo, said the incident occurred on Sunday, July 21, about 11am.

He said 27-year-old crocodile trainer Pravit Suebmee had bite wounds on his face and neck but was not seriously injured.

Mr Uthen said that Mr Pravit has more than eight years of experience in crocodile training. He told him the crocodile might have been startled after he placed his head between its jaws and then his hand slipped on the wet ground and accidentally brushed its cheek.

"This is the first time this has happened at our crocodile farm," Mr Uthen said. "I've regularly warned the performers to be careful at all times." 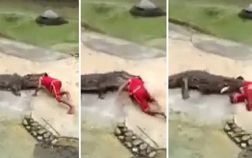 Sao Saengkit, another crocodile trainer, grabbed the huge reptile's tail when it bit Mr Pravit. He also said his colleague seemed to slip and this probably startled the reptile and caused it to snap its jaws and jerk away.

Mr Sao, 37, said he was keeping an eye on the other crocodiles when his colleague was bitten.

Click "play" to listen to Crocodile bites head during stunt and "Download" to keep this file for educational purpose.

accidentally (adverb): when something happens by accident (was not expected or planned) - โดยบังเอิญ

brush (verb): to pass by or over and touch lightly - ปัด,สัมผัสเบา

cheek : on of the soft parts of your face below your eye and between your mouth and ear - แก้ม

crocodile (noun): a large animal (reptile) with a long body, a long mouth and many sharp teeth, that lives in the water in hot countries - จระเข้

escape (verb): to get away from a place; to leave a place where you are in danger - หนี

experience : the knowledge and skill that you have gained through doing something for a period of time - ประสบการณ์

grab : to take or hold somebody/something with your hand suddenly, firmly or roughly - จับ,ฉวย,คว้า,แย่ง

ground (noun): the outer surface of the earth, that we walk on - ผิวดิน, ผิวโลก, พื้นดิน

jaw (noun): the bone on the lower part of the mouth that goes up and down when chewing food - ขากรรไกร

performer : a person who performs for an audience in a show, concert, etc - นักแสดง, ผู้แสดง

regularly : done or happening often, especially with the same time and space in between each activity and the next - เป็นประจำ, เสมอๆ

slip : to slide a short distance by accident so that you fall or nearly fall; to slide out of position or out of your hand - ลื่นไถล

snap (verb): done quickly without much warning or preparation -

startled : to be suddenly very surprised in a way that slightly shocks or frightens you - ผวา, ขวัญหาย

trainer : a person who teaches people or animals to perform a particular job or skill well, or to do a particular sport - ครูฝึก, ผู้ฝึก

warn : to make someone aware of a possible problem or danger - เตือน