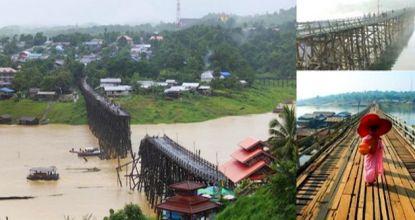 Photos show the bridge after it began collapsing on Monday, and, on the right, the bridge in use by local people in Sangkhla Buri. (Photo of collapsed bridge by Thiti Wannamontha)

Saphan Mon, the country's longest wooden bridge, collapsed due to a build-up of weeds, an official says.

The bridge spanning the Song Kalia River in tambon Nong Plu started collapsing on Sunday evening, and by Monday morning up to 70 metres of the 850-metre long bridge had disappeared.

Mr Chathip said the bridge was unable to withstand the pressure which the weeds caused after having piled up against the structure in the strong currents.

No one was hurt in the incident.

The Mon Bridge, a frequent tourist destination, is about 850 metres long. It is recognised as the world's second longest wooden bridge, second to the Horrai Bridge in Shimada, Shizuoka Prefecture, Japan, which is 897 metres.

The Department of Public Works and Town and Country Planning will be asked to examine the bridge to see whether it can be repaired, he added.

More than 150 houses in several villages were flooded, while Christian Hospital staff had to evacuate patients to nearby buildings.

build-up : a series of passes in preparation for an attack on goal -

current : a strong movement of water in one direction - กระแสน้ำ

disaster : something very bad that happens and causes a lot of damage - ความหายนะ

due to : because of - เนื่องจาก

evacuate : to leave a place because it is not safe - อพยพออกจากพื้นที่

official : someone with an important position in an organisation - เจ้าหน้าที่

pile up : to put objects one on top of another, in this case, to increase in amount - กอง

repair : to fix something that is broken or damaged - ซ่อมบำรุง

span : to stretch right across something, from one side to the other - ก้าวข้าม

staff : workers employed by a person or organisation considered as a group - คณะผู้ทำงาน, คนงาน

structure : something large such as a building or a bridge that is built from different parts - โครงสร้าง

weed : a wild plant growing where it is not wanted, especially among crops or garden plants - วัชพืช

withstand : to be strong enough not to be hurt or damaged by extreme conditions, the use of force, etc. - ทนต่อ, ต้านทานต่อ

zone : an area that has an important or typical feature; an area where a particular activity is allowed or not allowed - พื้นที่, บริเวณ, เขต