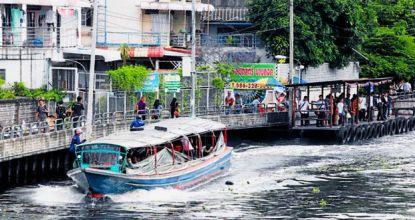 Govt plans to clean Saen Saep canal which was once clean enough to wash clothes, take a bath or swim in. 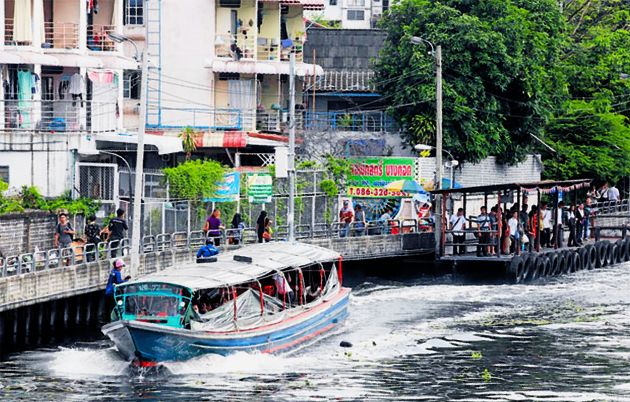 Just a few decades ago, Khlong Saen Saep canal was clean enough for residents along the banks to wash their clothes in or take a bath or a swim. The residents today dream the canal can be restored to its former glory. FILE PHOTOS

Cleaning up a putrid stream of water

Looking at the black and lifeless Khlong Saen Saep, canal-side resident Sarot Phueaksamli finds it hard to believe he once drank water from it.

When he was young, water in the canal was almost no different from today's tap-water as people used it for cooking and daily household routines.

The canal was also a place where he and his friends learnt to swim.

That was decades ago when most of Bangkok was still green and not covered with roads and concrete buildings, said Mr Sarot, a 60-year-old resident of Ban Khrua, an ancient Muslim community in Ratchathewi district.

He thinks constantly about the revival of "old Saen Saep". His dream is also shared by many people aged over 50, including Bangkok governor MR Sukhumbhand Paribatra.

The governor is working with officials and the people to clean up the canal, but it is doubtful whether their efforts will bear fruit.

"If you ask me whether we can turn it into a clean canal, my answer is yes, but it's going to be very difficult."

His solution is to divert polluted water from Khlong Saen Saep to nearby canals and rivers. The aim is to dilute the filth in the larger body of water.

However, one problem is that if dirty water is diverted elsewhere, the level in the canal would be reduced so much that boat transport could not continue.

"We have to ask commuters whether they would be prepared to accept boat services being halted," Mr Amon said.

This question has obviously drawn opposition. Today, Khlong Saen Saep is a major transportation link for city folk who want to avoid traffic congestion, while others, whose homes are far from main roads, have only the canal as a convenient way to access their communities.

Primarily, Khlong Saen Saep was built as a route to connect the Chao Phraya River in Bangkok and the Bang Prakong river in Chachoengsao under the orders of King Rama III in 1737.

It was later ignored when land transport became more popular. However, City Hall began to see its importance 20 years ago when traffic in the inner city started to become unbearable and the canal appeared to be an alternative transport link covering major venues, Ratchadamnoen Nok Avenue, Phaya Thai, Pratunam, Asok, Thong Lor and Ramkhamhaeng Road.

Though it significantly speeds up travel for city commuters, those who use the boat services fear being splashed by the fetid water.

The problem has caused city officials to spend a lot of effort in returning life to the canal, ranging from encouraging residents not to drop garbage into it to building more wastewater treatment plants to treat waste water in the capital.

However, because of budget constraints, there are insufficient wastewater treatment plants in the capital and, as a result, only 30% of unwanted water from the city's sewers is treated, deputy city clerk Sanya Shinimit admitted.

Yet waste water treatment is considered to be the "most appropriate and sustainable solution" rather than diverting waste water from Khlong Saen Saep to other areas, he said.

Water diversion is acceptable in the short term because communities and businesses will, in the long run, release even larger amounts of waste water into the canal.

But the barriers to cleaning up the canal are not causing city officials to give up their efforts to cleanse Khlong Saen Saep and other city canals.

However, the water quality in Khlong Saen Saep has remained critical for decades. It is hard to convince some Bangkokians who once experienced a clean canal.

"I really want to see Khlong Saen Saep become alive again after I retire from work," said Chawalit Methayapraphat, the owner of Khrop Khrua Khonsong Co which provides boat services along the canal.

In his 60s, Mr Chawalit said he felt "helpless" over the bureaucratic system which is too slow to solve problems, unlike in other countries. 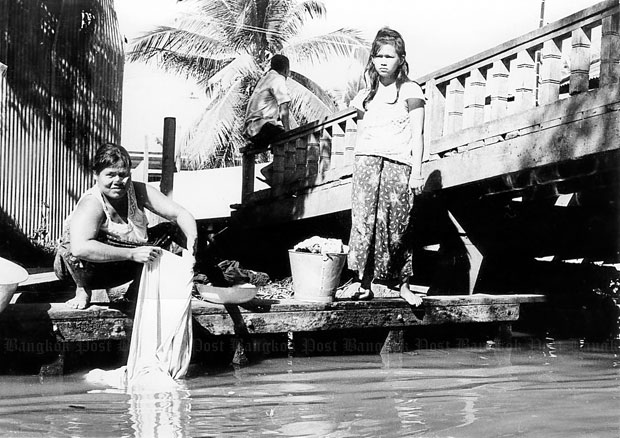 People washing their clothes decades ago in a much cleaner canal.

Click "play" to listen to Bangkok's canals: Cleaning up pollution and "Download" to keep this file for educational purpose.

acceptable : that somebody agrees is of a good enough standard - ที่ยอมรับได้

access (verb): to allow entry to a building or place; to be able to get to something - ทำให้เข้าสู่ได้

admit : to agree that something is true, especially when you are unhappy, sorry or surprised about it - ยอมรับ

appropriate : suitable or right for a particular situation or purpose - ที่เหมาะสม

avoid : to stay away from a place; to try to prevent something from happening - หลีกเลี่ยง

bank : a raised area of land along the side of a river (or canal) - ริมฝั่งแม่น้ำ

barrier : anything that prevents people from being together or understanding each other - อุปสรรค

bear fruit : to be successful; to show a good result - ประสบความสำเร็จ

blame : to say or think that someone or something did something wrong or is responsible for something bad happening - ตำหนิ

commuters : people who regularly travel between work and home - คนเดินทางระหว่างบ้านและที่ทำงาน

connect : to join together two or more things - เชื่อมต่อ

constantly : continuously; all the time - อย่างต่อเนื่อง

convenient : easy to do, or not causing problems or difficulties - สะดวก

daily (noun): a daily newspaper, a newspaper published every day -

diluted (adj): when there is less of something (lower oncentration) after more water or another liquid is added, thinned - เจือจาง, มีตัวทำละลายมาก มีตัวถูกละลายน้อย

divert : to cause something to change direction, in this case, water - เบนเส้นทางเดินน้ำ

doubt : a feeling of being uncertain about something/someone or not believing something - ความสงสัย

doubtful (adj.): something that is not certain and likely to not be true - น่าสงสัย, สงสัย

encourage : to cause someone to want to do something - กระตุ้น ให้การสนับสนุน

faith : trust in somebody's ability or knowledge; trust that somebody/something will do what has been promised - ศรัทธา

filth : dirt that is especially unpleasant, usually because there is a lot of it -

give up : to admit that you can’t succeed and stop trying - ยอมแพ้

glory : admiration and praise that you get because you have done something impressive - ความมีชื่อเสียง, ความรุ่งเรือง

ignore : to intentionally not listen or give attention to - ทำเพิกเฉย

land transport : the moving of people and things between places using trucks, buses and other vehicles over roads -

level : the amount of liquid that there is in a container, river, dam, etc., which can be seen by how high the liquid is - ระดับ

massage parlour : a place where you can pay to have a massage - โรงนวด,สถานบริการ (อาบ,อบ,นวด)

official : someone with an important position in an organisation - เจ้าหน้าที่

opposition : strong disagreement with a plan or policy - ความขัดแย้ง

order (verb): to use your position of authority to tell somebody to do something or say that something must happen - สั่ง

pay attention : to watch, listen to, or consider something or someone very carefully - เอาใจใส่, สนใจ

range : a number of different things that are of the same general type - ขอบข่าย

release (verb): to let something move freely; to allow a substance to flow out from somewhere - ปล่อย

restore : to bring back to good condition - ฟื้นฟูสภาพ

revival (noun): to bring back into use something that has not been used for a period of time - การนำมาทำใหม่, การทำให้มีพลังใหม่

route : the roads, paths, waterways, etc., used to go from one place to another - เส้นทาง

routine : the normal order and way in which you regularly do things - กิจวัตรประจำ

solution (noun): one way to solve a problem - วิธีแก้ปัญหา

solution : a way of solving a problem or dealing with a difficult situation - วิธีแก้ปัญหา

splash : to hit something noisily with a liquid - กระเด็นเปื้อน, สาดกระเด็น

stream (noun): a continuous flow of something, e.g., liquid, gas, inflormation or even people - การไหลต่อเนื่อง, กระแส

sustainable : able to be successfully continued for a long time - ยั่งยืน, ถาวร

tap water : water that is sent through pipes into building - น้ำประปา

traffic congestion : roads that are very crowded with vehicles - รถติด

transport : moving people or things from one place to another - การขนส่ง

transportation : the process of moving people or things from one place to another - การขนส่ง

treat (verb): to put a substance is put in/on something, for example in order to preserve or clean it - บำบัด

venue : a place where a public event or meeting takes place - สถานที่ชุมนุม

wastewater (noun): water that has been used already and thrown away - น้ำที่ใช้แล้ว, น้ำทิ้ง