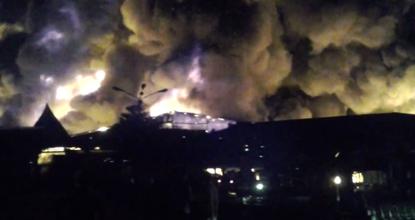 A major fire destroyed the Phuket SuperCheap store in a blaze that started when over 1000 people were in the building. 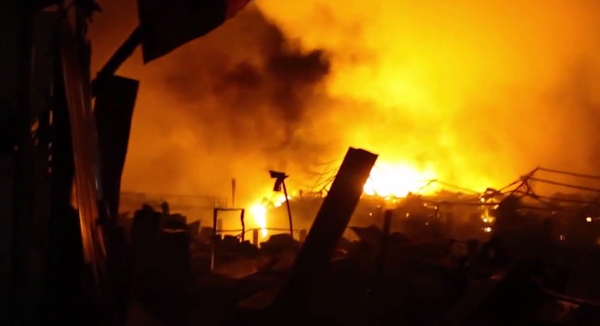 Still image from video uploaded by to YouTube by Michael Spigarolo.

Thai PBS reports on its evening news that the fire is STILL not completely extinguished and officials are likely to spend another night trying to do so. There are still inflammable materials (gas tanks, cans of paint, etc.) so it is dangerous to go inside. Since such a large area is involved, police are very concerned about looting and they are keeping a close watch. SuperCheap is considered and old and valuable part of the Phuket community, so business has been heavy at its various branches around Phuket. Workers say they will happy to continue with the company if there are plans to rebuild.

Phuket newspapers now confirm that one person, the woman mentioned in yesterday's report, is missing. No casualties have been reported, but the serious search should take place today. The Phuket News quotes one shopper who was in the store when the first started, said it spread from a small fire that looked like it could be controlled to a major fire engulfing the whole store within 10 minutes. He said he was sure there were casualties. The 2736 company workers mentioned yesterday were Thai workers. Apparently, there were about 800 workers from neighbouring countries as well.

Meanwhile, Thai PBS just reported that some ill-intentioned people have combined video footage from the Phuket fire with still photos of bodies of victims of the January 1, 2009 Santika pub in Bangkok and uploaded them to social media sites. 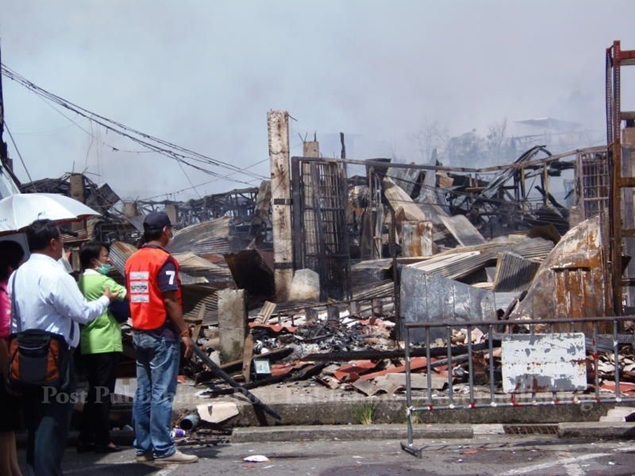 20:00 Thai PBS had an excellent report on their evening news tonight. You could clearly see flames coming out from under the rubble. The local government has termed it a danger zone since there is still much potentially explosive material on the site and, indeed, small explosions are still heard periodically. 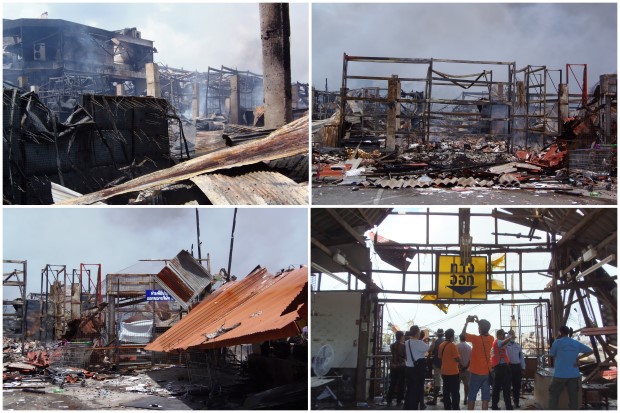 Photos from Post Today showing the extent of the destruction at the SuperCheap store and surrounding buildings.

There is very little additional news as the main site of the fire is still extremely hot. The casualty toll remains at zero and there is no new information about a missing person. Apart from the store itself, a warehouse, a workers' dormitory, two homes, a vehicle repair shop and three cars were destroyed. SuperCheap owners had reportedly insured their operation for 620 million baht which employed 2,736 people, according to Post Today.

14:00 MCOT reports that one person, a woman employee of Supercheap, is missing. Fireman are watering down the area because the fire is still smouldering in places.

12:00 Still no reports of casualties, but officials only now are beginning to enter the site. The big concern is no for the welfare of the staff. Hundreds may soon be out of work..

9:00am. A Phuket police official interviewed by TNN24 at 9:00am says, remarkably, there have been no deaths reported from the fire site and the only injury has been to a firefighter.

The fire is now under control, he said, but it is still too dangerous to enter the site. He said the fire destroyed the Supercheap store and also several surrounding buildings. The cause has not yet been determined. 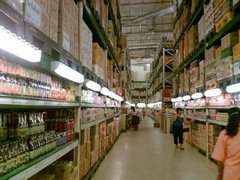 SuperCheap is a well-known shopping centre in Phuket, with a main branch known for selling "everything from soup to nuts". (File photo)

A major fire broke out late Wednesday at the Phuket SuperCheap store, sending flames and smoke climbing into the sky over the resort, and trapping shoppers and staff in the deadly confusion.

According to the Phuket News, the blaze began around 9.40pm, when hundreds of shoppers and an estimated 1,000 staff were inside.

More than 50 fire trucks rushed to the site of the blaze, and at least 300 firefighters were involved.

As of 2am (1900 GMT), authorities remained tight-lipped about possible victims.

Phuket Vice Governor Sommai Prijasilpa and district mayors were all at the scene.

Police cleared crowds around the fire, saying they feared explosions from gas tanks inside the store, and from a nearby Esso petrol station.

The newspaper's reporter Naraporn Tuarob said early Thursday, "At the moment I can hear explosions but I don’t know where they are coming from. The flames have moved to the Thanksina wood factory."

An Iranian resident of Phuket, Rasha Shidmaher, happened to be driving by. "There were people screaming and trying to leave the area. I saw a lot of ambulances as well from all around the island," he said.

An early report said that the fire began when an electrical short circuit had ignited gas tanks, but that could not be confirmed Thursday.

Click "play" to listen to Major fire in Phuket (updated) and "Download" to keep this file for educational purpose.

branch : an office or shop representing a large company or organisation in a particular area - สาขา

combine : to mix or be put together - รวมกัน

consider : to regard as; to think of as - ถือว่า

dormitory : a large building in or near a college or university, where students live - หอพัก

employee : someone who is paid regularly to work for a person or an organisation - ลูกจ้าง

engulf : to cover or surround something in a way that harms or destroys it - ปกคลุม

footage : film or video of a particular subject or event - ฟิลม์หรือคลิปภาพยนตร์ หรือวิดีโอ

inflammable : of something that burns easily -

looting : stealing things from buildings, houses or shops, especially during a war or after a disaster   - การปล้นสะดม

remarkably : in a way that is unusual and surprises or impresses you - อย่างน่าอัศจรรย์ใจ

reportedly : as reported (often used for showing that you are not certain that something you are reporting is true) - ตามที่รายงาน

rubble : broken pieces of stone and brick from building, walls, etc., that have been destroyed - ซากปรักหักพัง

search (noun): looking somewhere or through something carefully in order to find something - การค้นหา

site : a place where something happens or happened - สถานที่เกิดเหตุ

smouldering : burning slowly, producing smoke but not flames in this case, continuing to be a problem, but not in an open way   - ที่เป็นปัญหายืดเยื้อมานาน

social media : the use of web-based and mobile technologies to turn communication into an interactive dialogue, e.g., Facebook, Twitter, etc. - เครือข่ายสังคมออนไลน์

staff : workers employed by a person or organisation considered as a group - คณะผู้ทำงาน, คนงาน

still photo : a photograph (rather than a video) - ภาพนิ่ง

surrounding : all around a place - บริเวณรอบๆ