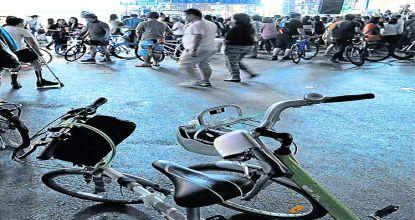 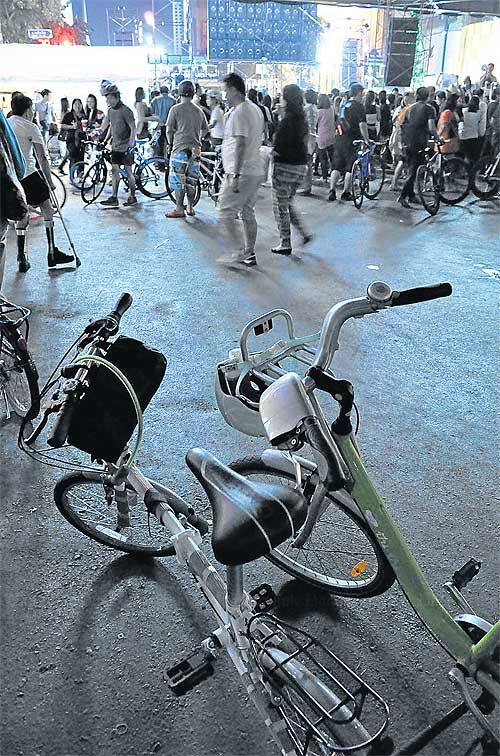 Copenhagen of the east

When Suthep Thaugsuban decided to lead the Bangkok Shutdown march on January 13, his goal was to change national politics. He had no idea his march would tremendously change Bangkok traffic and the way Bangkokians think about daily commuting - in a good way.

In a city where more than half of the daily commuters rely on private transport to and from work, Bangkok traffic has become the lightest in years after the closure of seven main intersections....

...While millions of city commuters flocked to the BTS and MRT services on the first day of the streets' closure, the secretary, who started cycling over a year ago, decided to cycle to work. It has never been this easy to get around Bangkok with the unusually empty streets and cool weather.

"The Bangkok Shutdown has made us realise that private cars aren't the only choice for commuting," said Paniti Sutabutr. Paniti had to find new ways to take her daughter to school after the 15-minute drive from Sukhumvit Soi 49 to the school on Sukhumvit Soi 15 became an hour. To shorten their trip, the mother parked her car on Sukhumvit Soi 23 and then walked, with her daughter scoot-boarding, along Saen Saeb canal to school....

...Since the first day of the closure, hundreds of cyclists have taken to the empty streets. An increasing number of cyclists can be found around the city during the day. Larger groups of cyclists have been seen cycling from one rally site to another.

Bicycles are often seen as friendly enough to enter rally sites, while other vehicles, including motorcycles, have been prohibited at all sites. Cyclists are allowed to enter all protest sites at all times, with a tighter security after dark. Before sunset, they are also "allowed'' to use the flyover bridges that have been occupied by protesters, including the Thai-Belgium, Thai-Japanese and Rama VIII bridges.

In theory, home-made bombs could be hidden inside a bicycle part, according to a PDRC guard at Patumwan intersection, but he explained that all two-wheelers, especially the Bangkok Metropolitan Administration's green Pun Pun bike, could easily pass the gates....

...The number of bicycles have risen so quick that one street vendor who sells bicycle lights, moved his stall from Worachak to the rally sites, first to Ratchadamnoen Avenue and then to Siam Paragon. At the main rally site, he has seen more than 100 cyclists passing through every day.

...Paniti was now exploring a canalside pathway to get to her daughter's school without having to drive at all. She plans to continue using the route even when the traffic situation returns to normal.

If the idea of being less dependent on private cars lingers even after the political crisis is over, Bangkok will become a much friendlier city for cyclists and pedestrians. 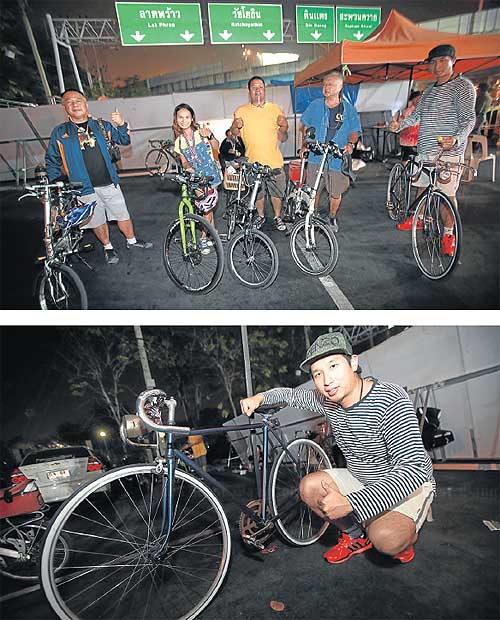 commuters : people who regularly travel between work and home - คนเดินทางระหว่างบ้านและที่ทำงาน

cycle : riding on a bicycle -

cycling : the activity of riding a bicycle -

cyclist : a person who rides a bicycle - นักขี่จักรยาน

dependent : needing somebody/something in order to survive or be successful - ที่ต้องพึ่งพิง

empty (adj): having nothing inside; with no people or things - ว่างเปล่า, ว่างโล่ง

explore : to examine something completely or carefully in order to find out more about it - สำรวจ,ตรวจ

get around : to go or travel from one place to another in a city or area -

hidden (adjective): when something was put in a place where people cannot see or find it - ที่ซ่อนไว้

intersection : a place where roads, lines, etc., join or cross each other - สี่แยก

linger : to stay somewhere longer than is necessary or required - อ้อยอิ่ง

pathway (noun): a way or track that is built or is made by the action of people walking - ทาง, ทางเดิน, เส้นทาง

private : owned by a particular person or group - ของส่วนบุคคล, ของเอกชน

private : privately owned; not owned by the government; owned by a particular person or group - ของส่วนบุคคล, ของเอกชน

rely on : to need something in order to continue living, existing, or operating - อาศัย, พึ่งพาอาศัย

route : the roads, paths, waterways, etc., used to go from one place to another - เส้นทาง

site : a place where something is located - สถานที่

situation : all the circumstances and things that are happening at a particular time and in a particular place - สถานการณ์

stall : a large table or a small building that is open at the front, used for selling things (or for giving people information) - รถ หรือแผงขายของ

transport : moving people or things from one place to another - การขนส่ง

unusual (adj): different from what is usual or normal - ผิดปกติ