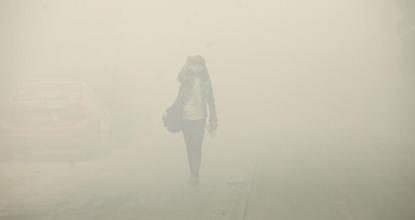 A massive fire broke out at a garbage dump covering 150 rai of land on Sunday afternoon and it has continued throughout today as firefighters try to contain the blaze. 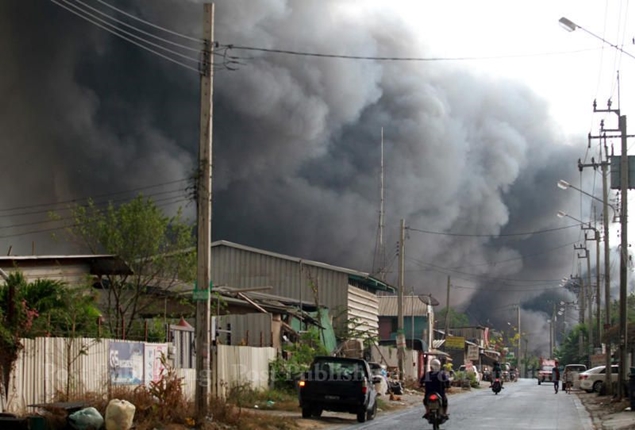 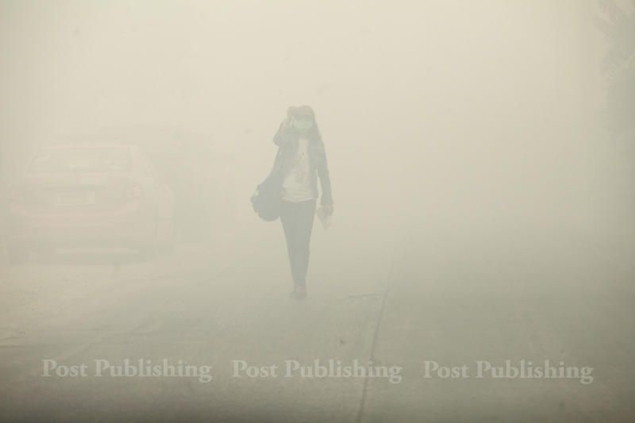 A woman walks through thick smoke caused by a massive fire at a rubbish dump in Muang district, Samut Prakan. SOMCHAI POOMLARD 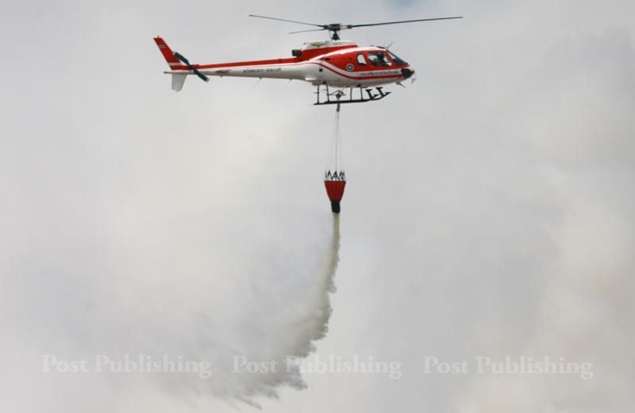 Helicopters have been brought in to fight the blaze. SOMCHAI POOMLARD

People living near to a fire-ravaged rubbish dump in Samut Prakan are being asked to voluntarily evacuate the area due to dangerously high levels of toxic substances in the air more than 24 hours after the blaze began.

More than 20 fire trucks were sent to the scene to battle the flames. Firefighters are spraying water over the dump to keep the fire from spreading, while helicopters are pouring water over areas not reachable by ground vehicles. It is likely to take firefighters another few days to completely put out the fire.

According to reports on Monday afternoon, smoke from the fire is affecting people living in three districts of outer Bangkok – Bang Na, Lat Krabang and Prawes. Members of the public are complaining of thick smoke and the smell of plastic burning.

The Pollution Control Department on Monday measured chemical vapour at the dump site and in communities within a 200 metre radius. It found dangerously high levels of carbon monoxide in the air at the dump site, measuring 175 parts per million (ppm), compared to the maximum standard of 27ppm. However, the levels recorded in surrounding communities was only 10ppm, Jirawut Jiamsakul, an official from the department's Chemical Emergency Response Centre, said.

The centre meanwhile found the level of sulphur dioxide in the air at the dump site was 4.5ppm, far above the 0.2ppm standard. The proportion of volatile organic compound (VOC) in the area was also too high at 0.9-1.0ppm, exceeding the 0.0ppm standard.

Mr Jurawut said around 200 people from 90 families in three communities situated closest to the fire location have already evacuated. However, there are 1,480 households in the direct vicinity of the fire that may be affected by high levels of pollution in the air.

A fire which started in a large garbage dump in Samut Prakan province yesterday continued to burn fiercely on Monday and the area has been declared a disaster zone.

Provincial governor Kanit Iamrahong said he called a meeting of officials in tambon Praeksa yesterday and declared the site a disaster zone to keep people out of the area and make it easier for emergency services battling to put put the fire.

He said the extent of the fire had been contained, but it continued to send billows of smoke  over the area.  Firefighters were continuing to spray water to keep the fire from spreading.

SAMUT PRAKAN — A massive fire broke out at a garbage dump covering 150 rai of land on Sunday afternoon and continued into late evening as firefighters tried to contain the blaze.

The garbage site is situated in Soi Praksa 8 in tambon Praksa of Muang district. Authorities are investigating the cause of the fire that began in the central part of the landfill at 1pm and spread quickly to cover more than 20 rai as of late Sunday evening. 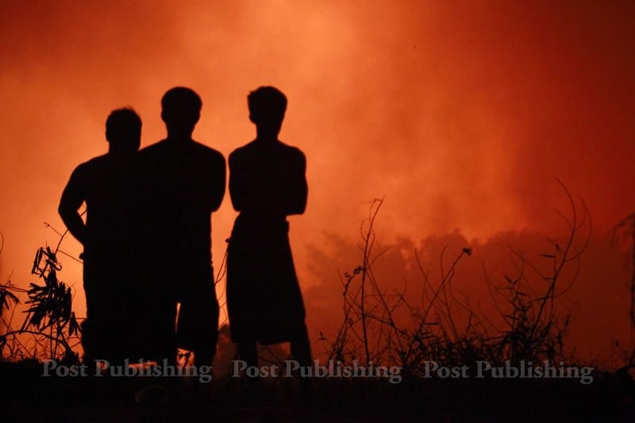 Residents watch the fire as it continues into the night. THANARAK KHOONTON

More than 20 fire trucks were sent to the scene to battle the flames. The blaze sent thick, polluted black smoke high into the sky, affecting residents in nearby communities. The smoke carried a strong stench with it.

Reports said the site was previously operated by a private company but had been closed for years. However garbage trucks were still regularly seen dumping garbage there. 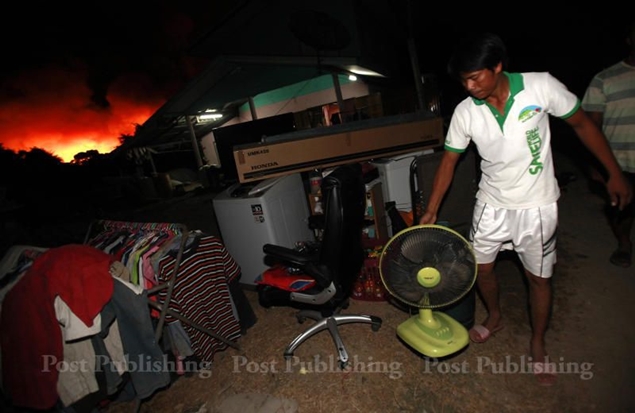 Police Radio FM 91 station reported that firefighters could not put out the fire as of 8pm and it was expected that they would be working all night.

Click "play" to listen to Air emergency at dump site (updated) and "Download" to keep this file for educational purpose.