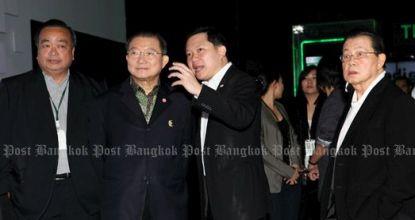 Charoen Sirivadhanabhakdi & family have emerged as Thailand's largest land owner with 630,000 rai, as the junta considers approving a property tax for the first time. 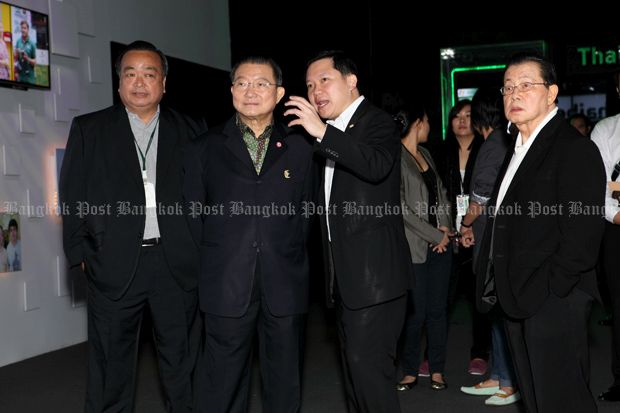 Thapana Sirivadhanabhakdi (right) gestures to his billionaire father Charoen during the ThaiBev Expo 2012 in Bangkok in September 2012.

The Sirivadhanabhakdi family has emerged as Thailand's largest landlord, with 630,000 rai, according to a survey.

Among politicians, Amnat Klangpa of Pheu Thai led the group, with 2,030 rai, followed by Banharn Silpa-archa of Chartthaipattana (2,000 rai) and Sanoh Thienthong of Pheu Thai (1,900 rai).

The Finance Ministry is pushing the land tax law to take effect within one year, hoping to generate 90 billion baht a year for local administrations.

Prachachart Turakit reported on Wednesday on the survey, which is based on title deeds at the Land Department.

It found these large landlords own plots all over the country, especially in large cities and tourist destinations.

The manners of purchases are mixed. Some gradually built their land banks while others bought them in blocks using brokers and their business networks.

Notably, they have changed the way they kept the land in recent years.

In the past, large landlords tended to leave the plots idle but over the past 4-5 years, they have turned them into farms, especially rubber, palm trees, fruit and other economic plants.

The change was probably triggered by efforts to push the progressive land tax for undeveloped land.

The trend is also evidenced in the changing business structures of these families and organisations toward more property development and farming.

The survey found the Sirivadhanabhakdi family, whose businesses range from liquors and drinks to property development, holding the most land of 630,000 rai, both directly and indirectly through their companies.

The major pieces of their landbank are a 12,000-rai plot in Cha-am, Phetchaburi province, and a 15,000 rai plot in Bang Ban, Ayutthaya province.

Earlier, Somapat Traisorat, CEO of TCC Land Co Ltd and Mr Charoen's son-in-law, said the family had hundred of thousands of rai in Thailand but it was not easy to count due to ongoing projects and developments.

Coming at a distant second is the Chearavanont family of tycoon Dhanin, who owns the CP integrated agribusiness conglomerate, CP Land property developer and True Corp, with more than 200,000 rai.

The crown jewel of his land bank is a 10,000-rai plot in Ayutthaya.

United Palm Oil Industry Plc also has 44,000 rai, followed by the Crown Property Bureau with 30,000 rai, 7% of which has been rented for commercial use.

Wichai Poolvararuk, founder of the EGV cineplex who became developer with Woraluk Property Co Ltd, has up to 8,000 rai, including 3,000 in Karnchanaburi.

The Jurangkool family, which owns Summit Corporation, an auto-parts manufacturer, has 5,000 to 6,000 rai including Summit golf courses in Bang Na and Chiang Mai and 100 rai in Phuket.

Some developers such as Keeree Kanjanapas, CEO of BTS Group Holdings Plc, also has at least 1,000 rai in his land bank while Property Perfect Plc, a SET-listed developer, owns 2,000 rai nationwide.

Politicians are another group with vast land in hand.

Sahoh Thienthong of Pheu Thai and his wife have 1,900 rai, while Anucha Burapachaisri of the Democrat party has 1,284 rai.

Too much, too little

The rest of the land is reserved forests (144.54 million rai) and plots under the supervision of the Agricultural Land Reform Office and state property land (9.78 million rai), according to the 2012 research by Asst Prof Duangmanee Laowakul, a lecturer at Thammasat University's Faculty of Economics.

Some 15.9 million of Thais owned land of whom 15.68 million were individuals and 212,000 juristic persons or companies.

The largest group of 3.48 million was land owners with 1-5 rai, representing 21.9% of all land owners. Of this group, 3.43 million were individuals.

Pongthip Samranjit, director of Local Act, told Prachachart Turakit the proposed tax on undeveloped land at 0.5% of appraised prices, to double every three years but capped at 2%, was too low.

This is because the average land price increase, at 4-6% a year, is still higher than the maximum tax rate.

For land holding to be distributed more evenly, the tax must be comparable to the average price increase.

A higher rate — 5% in countries such as France, South Korea and Japan — could apply only to those owning a certain amount of land.

"The proposed tax structure won't solve land problems. A progressive rate based on land holding could help," she said.

The land tax draft is among the laws the Finance Ministry is proposing the National Council for Peace and Order (NCPO) for consideration.

If approved, it will push for its enforcement within one year.

The law had already been vetted by the Council of State in 2011 during the Abhisit Vejjajiva government, but was dropped when the House of Representatives was dissolved.

Under the draft, the tax rate for commercial use of land and buildings is not more than 0.5% of appraised prices.

For undeveloped land, the same rate as commercial land and buildings applies for the first three years, to be doubled every three years but not more than 2% in total.

The ministry hopes once the new law takes effect in stages, local administrations will get 45.12 billion baht when 50% of the rates apply in the first stage.

When 75% of the rates apply in the next stage, the forecast revenue would be 67.69 billion, rising to 90.25 billion when the full rates are used.

Click "play" to listen to Biggest land owners in Thailand and "Download" to keep this file for educational purpose.

accounting for (verb): being -

appraise : to give a judgment about how much money something might be sold for - ประเมินคุณค่า

approve : to give official permission - อนุมัต

average : an amount calculated by adding several amounts together, finding a total, and dividing the total by the number of amounts - เฉลี่ย, ค่าเฉลี่ย

billionaire : having more than a billion pounds, dollars (or a billion baht in Thailand) - คนที่รวยมากๆ มีทรัพย์สินพันล้านดอลล่าร์

broker : a person or company who arranges something such as a deal, agreement, a job, etc. - นายหน้า

cap : an upper limit on an amount of money that can be spent or borrowed - ขีดสูงสุด, ครอบ

dissolve parliament : to formally end the House of Representatives, usually leading to a general election - ยุบสภา

distribute : to give something to a group of people - แจกจ่าย

double : twice as big, twice as much or twice as many - สองเท่า

draft : written for consideration, but not yet in its final form - ฉบับร่าง

due to : because of - เนื่องจาก

evidenced : shown to be true - พิสูจน์

expo (noun): a fair where things are displayed for people to see such as new products; an exposition - งาน

Finance Ministry (noun): the ministry in charge of managing the country's money - กระทรวงการคลัง

focus : to give attention, effort, etc. to one particular subject, situation or person rather than another - เพ่งความสนใจ

forecast : a statement about what will happen in the future based on information available now - การพยากรณ์, การคาดการณ์

founder (noun): a person who establishes an institution, business, or organisation - ผู้ก่อตั้ง

gesture : a movement that communicates a feeling or instruction - ลักษณะท่าทาง

gradually : slowly and in small stages or amounts - อย่างทีละน้อย

House of Representatives : the main lawmaking body in Thailand - สภาผู้แทนราษฎร

idle : not being used - ซึ่งยังไม่ได้ใช้การ

individual : a person considered separately rather than as part of a group - บุคคล

juristic person : an organization that has the legal rights of a person -

land bank (noun): land that a company or organization owns that can be used to build on in the future -

land holdings : land that is owned by a person or company -

manufacturer : a person or company that manufactures a product - ผู้ผลิต

mixed : a combination or mixture of different things - ผสม

NGO : non-governmental organization (a charity, association, etc. that is independent of government and business) - เอ็นจีโอ, องค์การนอกภาครัฐ

plantation (n): a large farm where crops such as tea, coffee, cotton, sugar or trees, are grown - ไร่ นาขนาดใหญ่

politician : a person whose job is concerned with politics, especially as an elected member of parliament, etc. - นักการเมือง

property : a building or buildings and the surrounding land - อสังหาริมทรัพย์

purchase : the process of buying something - การซื้อ

reserve : to keep something currently not being used but that can be used when needed - สำรองไว้

SET-listed : a public company, i.e., a company that offers its shares to the public on the Stock Exchange of Thailand (SET) - บริษัทมหาชน

stage : a part of an activity or process or a period of development - ช่วง, ระยะ, ตอน

structure : the way in which the parts of something are connected together, arranged or organised - โครงสร้าง

supervision : the process of making sure that something is being done properly - การควบคุมดูแล การตรวจตรา

take effect : to begin to be used or required - ส่งผล

trail : to be behind some in a competition - ตาม

unit : one office or building or group of people - หนึ่งหน่วย

vetting : examining something or someone carefully to make certain that they are acceptable or suitable - ตรวจสอบ