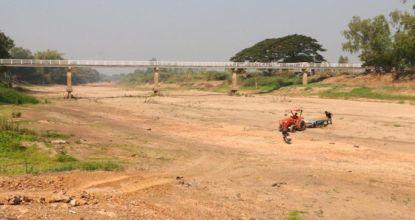 As dry season begins drought expected in at least 30 provinces with water stored in reservoirs at lowest in 15 years. Affected farmers hired to work on state projects. 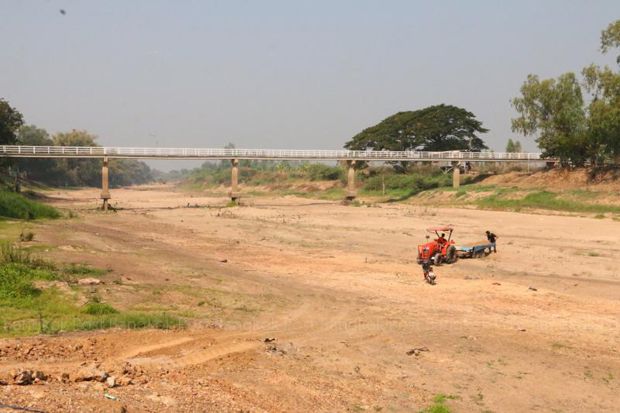 A tractor drives across the arid river bed of the Yom River, which dried out in January, in Phichit province. (Post Today photo)

Severe water shortages are expected in at least 30 provinces this year as the dry season digs in, with parts of eight provinces already declared drought disaster areas, but household water supply should be safe.

The drought-hit areas cover 2,091 villages in 30 districts of the eight provinces.

Senior officials of various government agencies involved in disaster management held talks at Government House on Thursday to assess the situation and map out measures to fight the water  shortage after Prime Minister Prayut Chan-o-cha warned the country could be facing the most severe drought in 15 years.

Wimol Chantharothai, a spokesman for the Agriculture and Cooperative Ministry, also said measures had been put in place to cope with severe drought this year.

The government had also hired 32,562 drought-affected farmers to work on state projects and promoted alternatives such as planting other crops and raising fish. It also approved a 65-million-baht fund that farmers could borrow from, he added.

Royal Irrigation Department director-general Lerdviroj Kowattana said the amount of water stored in reservoirs was at the lowest volume in 15 years. X

A national water management plan had been mapped out, and water in reservoirs was being efficiently managed. There was enough water for general use and domestic consumption throughout the year, he said.

The level of water in the Chao Phraya River basin and the Mae Klong River was not worrying. However, it was not sufficient to feed second-rice crop planting areas, he said.

The Royal Irrigation Department has plans to help drought-hit people.  Personnel and equipment could be dispatched to drought-hit areas if requested. The department also stood ready to deliver clean water to 2,631 affected areas, he said.

It had improved 305 groundwater sources to link with the existing tap water system at villages, said Mr Praneet. The would help ensure people have enough water for general  use during the rest of the dry season.

It has also implemented a clean drinking water scheme at 323 schools nationwide and developed water sources in 693 drought-prone areas.

Department of Water Resources deputy chief Boonchong Charasdamrongnit said the agency had instructed 11 regional offices to be on full alert to help affected residents. Water pumps, necessary equipment and personnel were on standby for help.

In Nakhon Ratchasima, 12 out of 32 districts severely hit by drought have been declared emergency disaster zones.

A total of 63,311 households in 955 villages of those districts have been badly affected and more than 700,000 rai of agricultural areas damaged due to a severe shortage of water, Sombat Srisak, chief of the Nakhon Ratchasima disaster prevention and mitigation office said.

More than 130 water trucks and 150 water trucks were sent out to affected areas. He urged affected people to seek help from the provincial office via hotline 2784 around the clock.

Chidchanok Somprasit, director of the Irrigation Office 8 in Nakhon Ratchasima, said the five major dams in this northeastern province wee now at only 48% of their holding capacity.

allocate (verb): to officially give something to someone - จัดสรร, จัดแบ่ง

approve : to give official permission - อนุมัต

assess (verb): to carefully consider a situation, person, or problem in order to make a judgment - ประเมิณ, ประเมิณสถานการณ์

borrow : to take and use something that belongs to somebody else, and return it to them at a later time - ยืม

cooperate : to work with other people to achieve a result that is good for everyone involved - ร่วมมือกัน

declare : to announce officially that something is true or happening - ประกาศ ยืนยัน

dig in (verb): to wait, or deal with a difficult situation, with great patience - อดทนรอ

disaster : an unexpected event, such as a very bad accident, a flood or a fire, that kills a lot of people or causes a lot of damage - ความหายนะ ความล่มจม ความโชคร้าย

dredge : to remove unwanted things from the bottom of a river, canal, lake, etc. using a sucking or other device - ขุดลอก

drought (noun): a long period of time when there is little or no rain - ฝนแล้ง, ภัยแล้ง, ความแห้งแล้ง)

dry season (noun): the dry part of the year when there is no rain - ฤดูแล้ง

hire : to pay someone to work for you - จ้าง

irrigation : the process of bringing water to land through a system of pipes, ditches, etc. in order to make crops grow - ระบบชลประทาน

map out : to plan something in detail - วางแผน

promote : to encourage or support something - สนับสนุน

raise : to take care of children while they are growing up - เลี้ยงดู

reservoir : a natural or artificial lake where water is stored - อ่างเก็บน้ำ

river bed : the bottom of the river, underwater - ท้องคลอง, พื้นใต้น้ำของลำคลอง

shortage (noun): when there is not enough of something - การขาดแคลน

situation : all the circumstances and things that are happening at a particular time and in a particular place - สถานการณ์

source : the place something comes from or starts at, or the cause of something - แหล่ง, แหล่งกำเนิด

store : to put and keep things in a special place for use in the future - เก็บ

supply : to provide somebody/something with something that they need or want, especially in large quantities - จัดหาให้, จัดส่งให้

tackle : to make an organised and determined attempt to deal with a problem - จัดการกับปัญหา

talks (noun): negotiations; when two sides that disagree get together and "talk" to reach some agreement - การเจรจา, การเจรจาต่อรอง

volume (noun): an amount of something - ปริมาณ

warn : to make someone aware of a possible problem or danger - เตือน