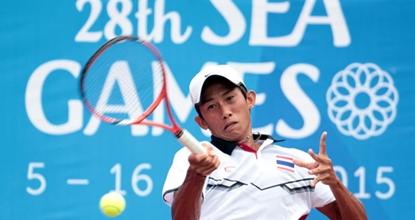 Thailand still leads Singapore in the gold medal table, but only by five: 86 - 81. Today's top performance came from the tennis team which won four of the five medals on offer.

Here is the latest from AFP

Tennis near-sweep as Thailand stay ahead 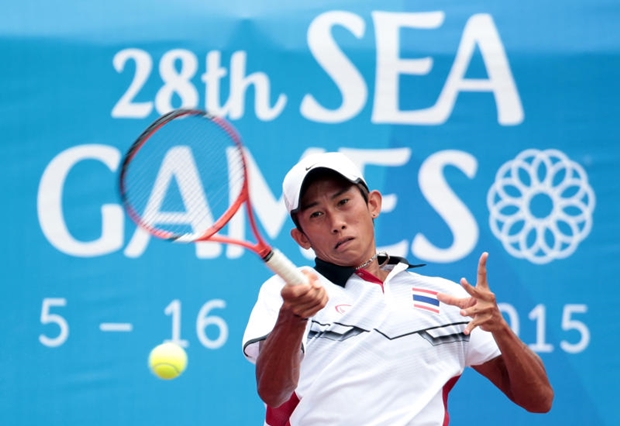 Singapore, June 14, 2015, AFP – Thailand just missed out on a Southeast Asian (SEA) Games tennis clean-sweep as they powered away from hosts Singapore on the medals table on Sunday.

Warit Sornbutnark beat Indonesia's David Susanto to win the men's singles 4-6, 6-3, 6-3 and make it four titles out of five for the Thais at Kallang tennis centre.

But Philippines duo Denise Dy and Treat Huey stopped Thailand winning all five when they beat Peangtarn Plipuech and Sonchat Ratiwatana to win the mixed doubles. 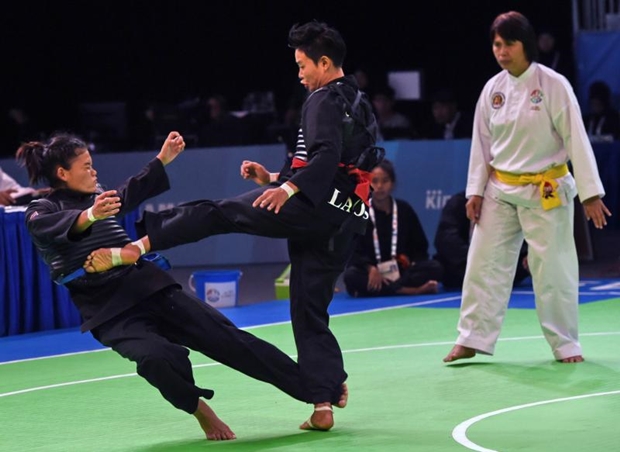 Thailand's Suda Lueangaphichatkun (L) fights against Olathay Sounthavong (C) of Laos in the women's pencak silat 55kg tanding final at the 28th Southeast Asian Games (SEA Games) in Singapore on June 14, 2015. Suda took a hit in this exchane, but came back to win the gold medal 3-2. AFP PHOTO / ROSLAN RAHMAN 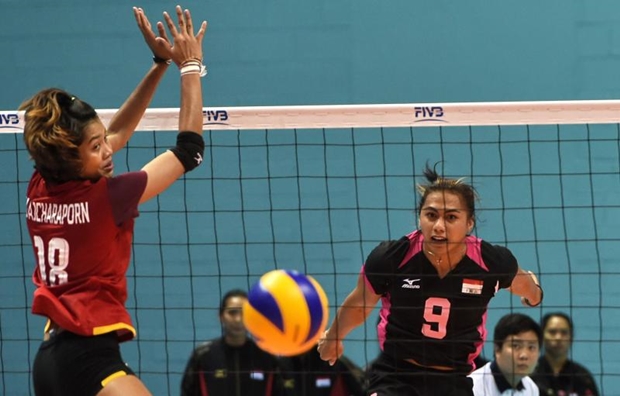 Thailand's women's volleyball team also beat Indonesia 3-1 in the semi-finals, ending a turbulent appearance after calls for a gender test on their player Aprilia Manganang. 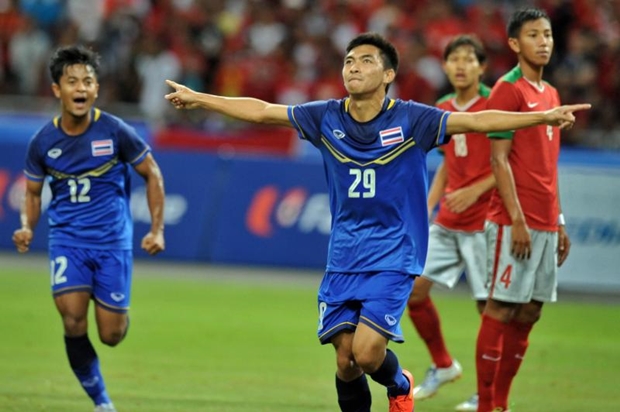 In case you are worried about Thailand holding its gold medal lead, you can relax a little. Thailand now leads Singapore 78 - 74. 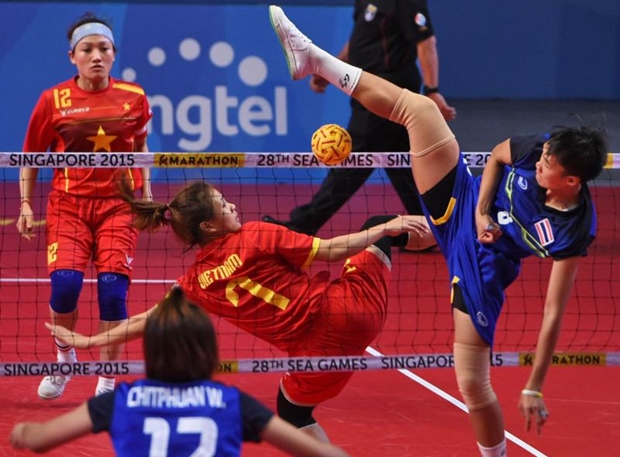 But the match everyone is talking about is Thailand's 5-0 semifinal victory of Indonesia in football. Here is a summary from the Bangkok Post 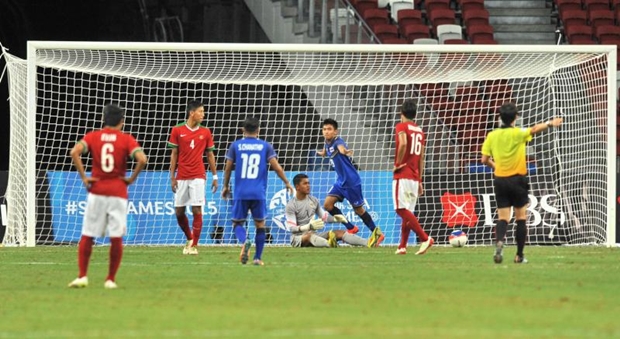 Two goals by midfielder Rungrat Phumichantuk helped power Thailand to a convincing 5-0 win over Indonesia on Saturday to book a place in the SEA Games football final against Myanmar.

Thailand dominated from the start, attacking in waves and outflanking the Indonesian defenders on the National Stadium pitch. Rungrat got the War Elephants on the scoresheet with a decisive strike in the 11th minute and midfielder Thitiphan Puangjan followed up at the half-hour mark with a header in heavy traffic.

Rungrat struck again seven minutes after the break, and defender Narubadin Weerawatnodom pounced on a stray ball just outside the area to drive home Thailand's fourth goal in the 57th minute. Midfielder Chanathip Songkrasin added a fifth goal after a scramble on the edge of the area a minute before full time.

The victory sets up an enticing final against Myanmar, the surprise package of the tournament, who defeated Vietnam 2-1 earlier in the day. The gold-medal match will take place at 7.30pm Thailand time on Monday.

Here is a summary of yesterday's winning performances in other sports from Tor Chittinand & Kittipong Thongsombat.

By the end of yesterday’s events, defending champions Thailand had 78 gold medals, four more than Singapore’s tally, with only three days of the Games remaining.

“I want to win gold in every tournament,’’ said Chanatip who has won the world and Asian Games titles.

“The Olympics is the only major tournament in which I have not yet won gold.”

Whilst in the men’s 63kg showdown, Akkarin outscored Zaw of Myanmar 19-3.

In sepak takraw, Thailand comfortably beat Myanmar 2-0 in the women’s regu final for the country’s fourth gold medal in the sport.

In tennis, Thailand had a one-two finish in the women’s singles after Noppawan Lertcheewakarn beat Varatchaya Wongteanchai 3-6, 6-0, 6-4 in the final.

Twins Sonchat and Sanchai Ratiwatana had few problems against Ruben Gonzales Jr and Jeson Patrombon of the Philippines in their 6-4, 6-4 win in the men’s doubles final.

In cycling, Asian Games gold medallist Jutatip Maneephan had to settle for silver in the women’s mass start road race.

Jutatip finished first in 2:49.42hr ahead of Vietnam’s Nguyen Thi That.

But following a protest, the organising committee penalised Jutatip for obstructing Nguyen earlier in the race.

Nguyen was then declared the winner and Jutaip the runner-up.

“I accept the decision and am happy with the silver medal,’’ Jutatip said. The team from Thailand celebrates their win in the women's 4x100-meter relay at the SEA Games in Singapore, Friday, June 12, 2015. (AP Photo/Joseph Nair) 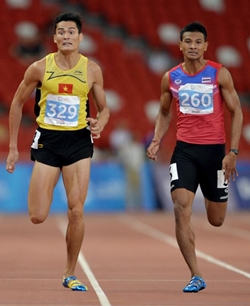 Singapore, June 12, 2015, AFP – Thailand seized seven athletics golds on Friday as they caught hosts Singapore at the top of the medals table and stamped their authority on the Southeast Asian (SEA) Games.

The last night of track and field turned into a Thai parade, with their sprinters providing the perfect final act with a men's and women's 4x100m relay double.

Thailand edged past Singapore, who have led since day one, on the medals tally with 71 golds to 70 late on Friday, with four days of competition still to go.

Sunisa Khotseemueang played a starring role by winning all seven events of the heptathlon as Thailand took seven out of Friday's 10 athletics titles to reach 17 overall.

Earlier Kunanon Sukkaew outsprinted Vietnam's Quach Cong Lich on the back straight to win a thrilling men's 400m in a Games record 46.00sec.

"I didn't expect it. I expected it to be in the one, two or three position but not the gold medal. I got the gold medal and I am very proud," Kunanon said in Thai after the race.

Here's more from the Associated Press 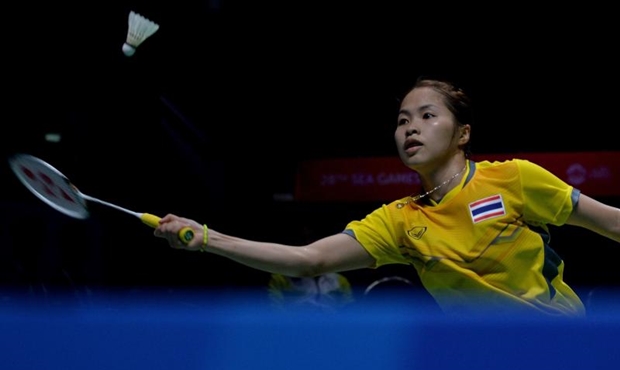 The 2013 world champion won the opening match 21-13, 21-14 against Malaysia's Lim Yin Fun, setting the powerful Thai team on course for a 3-0 win in the best-of-five gold-medal match.

Thailand led the men's team final 2-1 but Indonesia rallied to win the last two games for the gold medal.

archery (noun): the art or sport of shooting arrows with a bow - การยิงธนู

athletics (noun): track and field; sports that people compete in, such as running and jumping - กรีฑา

competition : a situation in which people or organizations compete, i.e., try to be more successful or better than somebody else who is trying to do the same as you - การแข่งขัน

convincing (adj): in a way in which someone is able to make you believe that something is true or right - อย่างโน้มน้าว, แน่ชัด,

defeat : to win a victory over someone in a fight, war or competition - ชนะ, ปราบ

defender : a player whose job is to stop the other team scoring in a game such as football - ผู้ป้องกัน

defending champion : a player or team who won a competition the previous time it was held - ผู้ชนะเลิศครั้งก่อน

duo : pair; two people (or things) who compete together as a team, work together or do something together - คู่

edge : to beat someone in a competition by a small amount - ชนะอย่างหวุดหวิด

enticing (adj): so attractive and interesting that you want to have it or know more about it - หลงใหล

gender : the fact of being either male or female - เพศ

header (noun): the top part of some data or text -

host : a country, city, group, person, etc. which provides the space and other things necessary for a special event - เจ้าภาพ

midfielder (noun): a football player whose position is mainly in the central part of a sports field - ผู้เล่นกองกลาง

on course : likely to achieve or do something because you have already started to do it -

outflank (verb): to move around the side of an enemy or opponent, especially in order to attack them from behind - จู่โจมด้านข้างของคู่ต่อสู้

outscore (verb): to score more points than your opponent - ได้คะแนนมากกว่าฝ่ายตรงข้าม

outsprint (verb): to go faster than someone else, especially at the end of a race -

overtake (verb): (past: overtook) to become greater in number, amount or importance than something else - ตามทัน, ไล่ตามทัน

petanque (noun): a bowling game in which the object is to roll a ball as close to the target as possible -

pounce : to quickly jump on or hold someone or something - มีปฎิกิริยาอย่างรวดเร็ว, กระโจน

proud : feeling pleased and satisfied about something that you own or have done, or are connected with - ภูมิใจ

rally (verb): to improve after a time of performing poorly - ฟื้นตัว

react : to change or behave in a particular way as a result of or in response to something - เกิดปฏิกิริยา

relay : an event where something is passed from person to person, each one going a certain distance - การส่งต่อ หรือวิ่งผลัด

respective : belonging or relating separately to each of the people or things already mentioned - เกี่ยวกับแต่ละบุคคลหรือแต่ละสิ่ง,โดยลำดับ

scramble (noun): moving quickly but with difficulty; to take quick action to solve a problem - การทำอย่างรีบเร่ง

semi-final (or semifinal) : one of the two games that are played immediately before the last game in a sports competition. The two people or teams who win the semifinals play each other in the last game, called the final, to decide who wins the competition - การแข่งขันกีฬารอบรองชนะเลิศ

spearhead : to begin an activity or lead an attack against somebody/something - นำหน้า

stamp your authority on (idiom): to do something to show you are in control of a situation -

standings : a list of people, teams, etc. showing their positions in a sports competition - ตำแหน่ง

starring role (noun): being in the position of the star or best performer in a competition, play, movie, etc. - แสดงบทบาทดารา

stray : away from the correct place or path - พลัดหลง, หลงทาง

strike : an act of hitting or kicking something/somebody - การตี, การเตะ

sweep (verb): (past form: swept) to win all of the top places in a competition - กวาด, ชนะท่วมท้น

table : a list of sports teams, countries, schools, etc. that shows their position in a competition, etc - ตารางรายการ, บัญชี

title (noun): the position of a winner in a sports or other competition - ตำแหน่งแชมป์

tournament : a competition for teams or single players in which a series of games is played, and the winners of each game play against each other until only one winner is left - การแข่งขัน

track and field (noun): sports that people compete in, such as running and jumping - กรีฑา

wave : a large number of people moving or arriving somewhere at the same time - คนกลุ่มใหญ่ที่กำลังมุ่งหน้าไปยัง