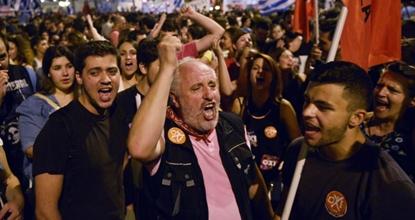 A final tally showed 61.31 percent of Greek voters decisively rejecting a bailout in a momentous referendum on austerity. Now the question is whether or not the country can stay in the eurozone and if it can't, how will it survive economically? 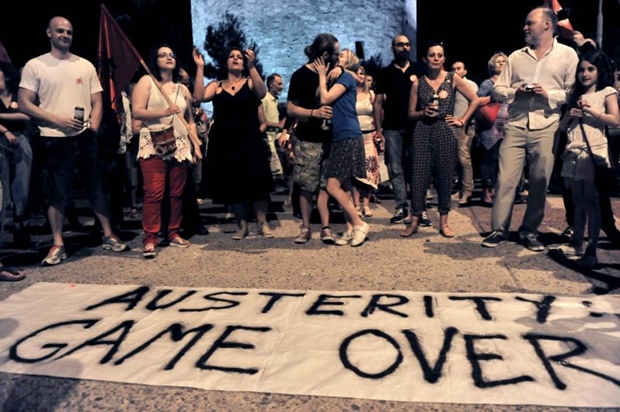 People shout slogans in front of the White Tower, city's landmark, in Thessaloniki on July 5, 2015, after early results showed those who rejected further austerity measures in a crucial bailout referendum were poised to win. Over 61 percent of Greek voters on July 5 rejected fresh austerity demands by the country's EU-IMF creditors in a historic referendum. AFP PHOTO /Sakis Mitrolidis

This is a fast-moving story and there will likely be updates as reaction to the vote continues to come in. Can Greece stay in the eurozone? And when the celebrations are over in Greece, will the banks reopen? 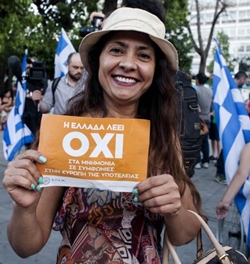 A woman celebrates at Klafthmonos Square in Athens on July 5, 2015 after the first exit-polls of the Greek referendum. AFP PHOTO / IAKOVOS HATZISTAROU

Participation stood at 62.5 percent, with 38.69 percent voting "Yes" to the reforms put forward by the country's creditors. Prime Minister Alexis Tsipras' radical left-wing government had called for a "No" vote in the referendum.

Thousands of Athenians gathered in central Syntagma Square to celebrate the result, despite warnings that failure to reach a deal with the creditors could trigger a Greek exit from the eurozone.

"I'm so happy," said 37-year old Dima Rousso, adding that she hadn't expected there to be such a clear margin between the 'No' votes and the 'Yes' votes.

"This is Europe's chance to become what it should have been in the beginning," she said.

"Together we have written a bright page in modern European history," an elated Prime Minister Alexis Tsipras told the nation in a televised address.

"This is not a mandate of rupture with Europe, but a mandate that bolsters our negotiating strength to achieve a viable deal," he added A handout photo from the Prime Ministers Office, Greek Prime Minister Alexis Tsipras speaks during a televised address to the nation late in Athens on July 5, 2015. The European Commission "respects" the result of the Greece bailout referendum, it said in a short statement, after Greek voters overwhelmingly rejected terms offered by international creditors. AFP PHOTO / Prime Minister's Office/ Andrea Bonetti

Now, Europe faces a near impossible choice between giving debt-laden Greece a chance or pushing it out of the euro and risking global turmoil, analysts said Sunday, after Greek voters overwhelmingly rejected international creditors' terms.

Berlin, Paris and Brussels all warned in the run-up to Sunday's referendum that a 'No' vote to the EU-IMF reform demands was a 'No' vote for the single currency and a return to the drachma (the former Greek currency).

Some analysts say the cold reality of a possible "Grexit" may make some leaders agree with Prime Minister Alexis Tsipras that the shock result does not necessarily have to mean a break with Europe.

"EU member states will give Greece another chance, but there is very little time and this will really be the last chance," Nicolas Veron of the Bruegel think tank in Brussels told AFP.

Jeroen Dijsselbloem, leader of the Eurogroup of eurozone finance ministers, who had warned ahead of Sunday's crunch referendum a 'No' vote would likely lead to Greece exiting the single currency, termed the result "very regrettable".

"I take note of the outcome of the Greek referendum. This result is very regrettable for the future of Greece," the Dutch finance minister said in a statement. 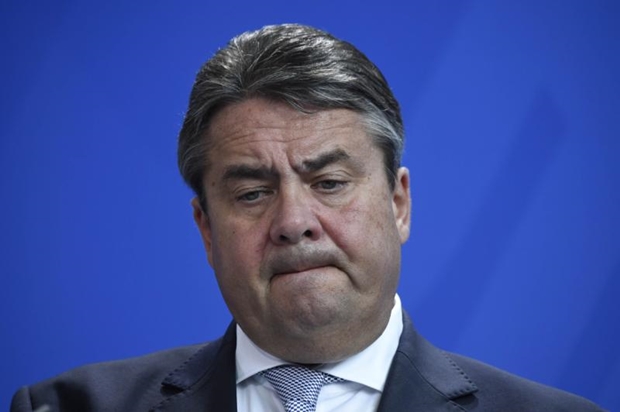 German Economy Minister Sigmar Gabriel: Greece has "torn down the bridges" between Greece and Europe and new negotiations are "difficult to imagine". AFP PHOTO / ODD ANDERSEN

Germany's vice chancellor Sigmar Gabriel took an even dimmer view of the message sent by austerity-addled Greeks after they rallied to a call by Prime Minister Alexis Tsipras for a boosted mandate to pursue a more lenient debt deal that includes debt forgiveness.

Leading the reaction from Germany, Gabriel, who heads the centre-left Social Democratic Party that shares power with Chancellor Angela Merkel's Christian Democrats, accused Tsipras of having "torn down the last bridges which Europe and Greece could have crossed to find a compromise."

Click "play" to listen to Greeks vote "OXI" (NO!) and "Download" to keep this file for educational purpose.