"Fireball" lights up Thai skies and there could be more | Bangkok Post: learning 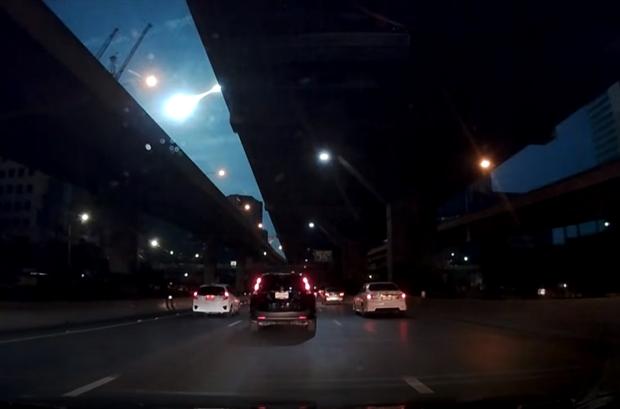 "Fireball" lights up Thai skies and there could be more

Astronomers say more such sightings are possible since this is the time of year when the Taurid meteor shower makes its annual appearance in the sky.

The suspected meteor was seen in Bangkok, Chon Buri, Ratchaburi, Kanchanaburi, Khon Kaen, Nakhon Pathom, among other provinces, around 8.35pm.

Dashcams from many vehicles caught the scene and netizens quickly went to twitter to describe what they saw.

"I could see it clearly in Chum Phae district, Khon Kaen province. It's moving west," said @Libpon on her Twitter account sent to JS100.

"I saw it on the expressway on my way to the Rama II exit, too," said @Kinokim_knk on another account.

The Thai Astronomical Society Facebook page was so overwhelmed with questions that it had to put out a lengthy question and answer section, explaining that the bright light was a likely fireball, a very bright meteor caused by a meteoroid. Since it likely burned up completely, it was probably not a meteorite.

The American Meteor Society has a more detailed explanation:

"Every October and November the two branches of the Taurid meteor shower become active. The Taurids are not known for their high numbers, rather they are known more for the fireballs they produce. Occasionally there are more Taurid fireballs than normal. 2015 may be such a year.

"Typically, Taurids appear at a rate of about 5 per hour, moving across the sky at about 27 kilometers per second, or 105,000kms per hour."

Click "play" to listen to "Fireball" lights up Thai skies and there could be more and "Download" to keep this file for educational purpose.

appear : to be seen - ปรากฏ

branch : (of a road or river) to be joined to another road or river but lead in a different direction - แตกแขนง, แตกกิ่ง

condominium (noun): an apartment building or group of houses in which each flat/apartment/house is owned by the person living in it but the shared areas are owned by everyone together - คอนโดมิเนียม

dashcam (noun): a small video camera installed inside a motor vehicle which records the road ahead as it is moving. -

meteor : a piece of rock from outer space that makes a bright line across the night sky as it burns up while falling through the earth's atmosphere - ดาวตก

meteorite : a piece of rock from outer space that hits the earth's surface - อุกกาบาต, ดาวตก, สะเก็ดดาว

meteoroid (noun): a small rocky or metallic body travelling through space which becomes a meteor when heated by entry into the earth's atmosphere -

netizen : a person who uses the Internet a lot - พลเมืองเครือข่ายคอมพิวเตอร์

occasionally : sometimes, but not frequently or regularly - บางครั้งบางคราว

overwhelm : to be in such great amount that a person cannot deal with it - ท่วมท้น

resident : a person who lives in a particular place - ผู้พักอาศัย

scene : a view that you can see in a picture or from the place where you are - วิว,,ภาพ, ทิวทัศน์,ทัศนียภาพ

section : any of the parts into which something is divided - ส่วน

sighting : an occasion when somebody sees somebody/something, especially something unusual or something that lasts for only a short time - โอกาสที่จะได้เห็น

suspected : thought to be something - เป็นที่สงสัย