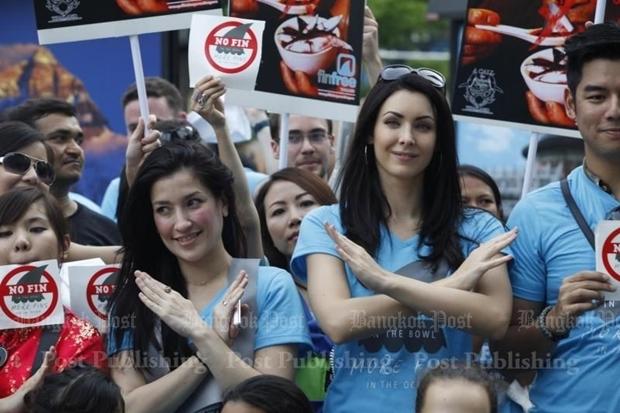 Former Miss Universe Natalie Glebova and other celebrities joined the Fin Free Thailand campaign in inner Bangkok in February 2013 urging consumers to avoid shark fins and restaurateurs to stop serving them. Recently, a well-known Chiang Mai school is also being targeted and the school quickly agreed not to serve shark fin soup at a social occasion. THITI WANNAMONTHA

Montfort College School in Chiang Mai has removed shark fin soup from the menu to be served at the school's annual party next month at the request of a parent and after the issue was raised by a green advocate.

Montfort College has informed us that it responded quickly to the parent's concerns over serving a dish containing shark fin at next month's annual reunion party. College officials say they thanked her for her concern and her valuable suggestion and tooks steps to remove the dish on October 26. The story became news after plans to include the dish was publicised by a prominent environmental activist.

Montfort College School in Chiang Mai should remove shark fin soup from the menu to be served at the school's annual party next month, says a green advocate.

The president of the Lanna Bird and Nature Conservation Club, Rungsrit Kanjanavanit, says he backs the concerns of a school parent who wrote to him saying she was disappointed in the decision to include shark fin on the menu, as it encourages animal cruelty.

The mother said the school was preparing to offer shark fin with crab meat and scallops in red soup, to be served at 260 tables during the annual reunion dinner on Dec 22-23.

Dr Rungsrit, also an environmental activist, said shark fin soup is no longer fashionable. Many airlines and hotels refuse to include the traditional Chinese delicacy on their menus.

The school should remove it from its menu as a good example to society, he said.

Dr Rungsrit said the complainant is the mother of three children at the school. She told him in the letter the school should avoid encouraging cruelty against the shark population.

She said sharks are not food for human beings and their fins have no extra nutrition compared to other kinds of food.

"I don't want to see the school's party as part of a vicious circle that kills sharks and destroys the marine ecological system," she said.

Dr Rungsrit said the mother also wrote to the school to pass on her concerns. Its executives had replied thanking her for her concerns and said they would consider the matter. No word was given on whether other parents have complained.

Click "play" to listen to Shark fin soup removed from menu (Updated) and "Download" to keep this file for educational purpose.