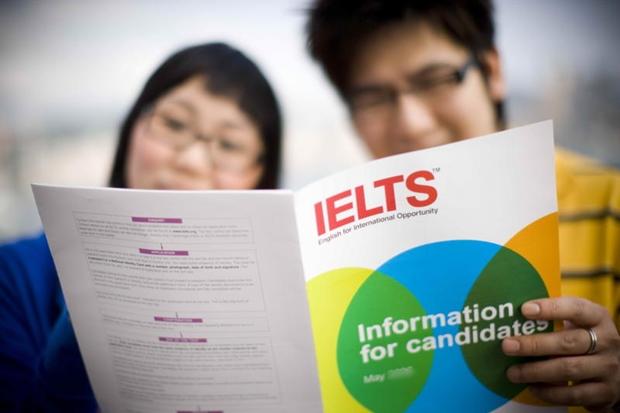 One of the most important English language tests for work and study is called the IELTS, and every year, thousands of Thais take the IELTS test. Here is what you should know about this exam.

Charles Cornelius is an English language teacher from the UK. He taught IELTS at the British Council in Bangkok for several years. He now teaches IELTS online and provides online courses and preparation materials for IELTS students through his website at ieltscharlie.com/.

However, if you want to enter a university, get a job or obtain a visa, people must often prove how good they are in English. This is usually done by taking an English language examination.

I have taught the IELTS for several years and I now help students to prepare for it through my website. In this article, I will tell you the key facts about the IELTS test.

What is the IELTS?

IELTS stands for International English Language Testing System. It is an English language exam that is recognised all over the world. It tests the English language proficiency of people who need to work or study in English. This could be a university in England, or a multinational company in Bangkok. The test reflects the way people use English at work, when they study and in everyday life.

IELTS scores are recognised for entry into the majority of universities and colleges in the United Kingdom, Ireland, Australia, New Zealand, South Africa and Canada. It’s also becoming increasingly used by universities and colleges in the United States. IELTS scores are also recognized by many businesses, professional bodies, immigration authorities and government agencies all around the world. In fact, IELTS scored are now accepted by over 9000 organisations around the world.

IELTS tests your listening, speaking, reading and writing skills, but to do well in the IELTS test, you also need to have good grammar and a wide vocabulary.

The different types of IELTS Exam

There are 2 main types of IELTS test: the General Training IELTS and the Academic IELTS.

The General Training IELTS is suitable for candidates who want to do a training course or work experience, or for immigration purposes.

The Academic IELTS is suitable for students who want to enter an undergraduate or postgraduate course at a college or university.

If you just want to live in the United Kingdom (and not work or study), for example by joining a family member there, there is a new test called the IELTS Life Skills test. Life Skills only tests your speaking and listening skills.

How is the IELTS scored?

You will get a band score (in whole or half bands) for each part of the test (listening, reading, writing and speaking). The average of these four scores is your overall band score.

Many Thai universities now ask applicants for their IELTS score when they apply for a place on a course. For example, to enrol on a Master's degree course at the Business School of Thammasat University in Bangkok, a candidate needs an IELTS score of 6.0 or above. On international degree programmes, such as those run by Chiang Mai University, candidates need a score of 5.0.

In the following table, you can see how Thailand compares with some other countries in the Academic IELTS. As you can see, Thailand got better scores than China, Japan and South Korea, and was level with Vietnam. 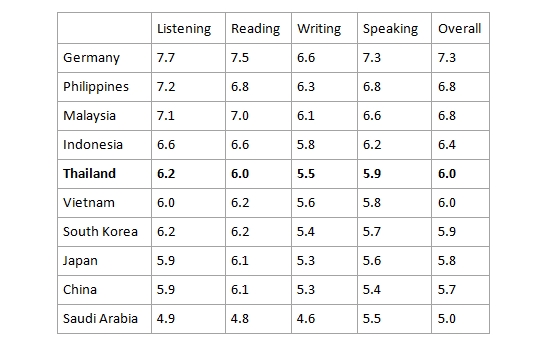 Where to take the IELTS test?

You can book an IELTS test through one of the teaching centres of the British Council or IDP. They run tests in several different cities across Thailand, including in Bangkok, Chiang Mai, Khon Kaen, Sakon Nakhon, Phuket and Hat Yai. In Bangkok, tests are usually held twice a week, and in other areas usually once every week or every 2 weeks.

In today's world, a high IELTS score has the power to change lives. It helps people to travel, study and work. But to get a high score, you need to prepare well. In the next article, I will explain how to prepare for the IELTS test.

Click "play" to listen to English tests: Understanding the IELTS and "Download" to keep this file for educational purpose.

applicant : someone who applies for something, such as a job or a loan of money - ผู้สมัคร,ผู้แจ้งความจำนง,ผู้ขอ

apply (verb): to make a formal request for permission to do or have something - ขอ, สมัคร

body : a group of people who work or act together, often for an official purpose, or who are connected in some other way - กลุ่มคน, นิติบุคคล

candidate : one of the people being considered for a job - ตัวแทนที่ส่งเข้ารับตำแหน่ง

candidate (noun): a thing that is likely to do or be something; something that is being considered for a particular job, use, etc. - ตัวเลือก

level with : even with, e.g., having the same score - เท่ากัน

master's degree : a further university degree that you study for after a first degree - ระดับปริญญาโท

multinational (noun): a company that operates in many different countries - บรรษัทข้ามชาติ, บริษัทระหว่างประเทศ

obtain : to get something that you want or need, especially by going through a process that is difficult - ได้มา, ได้รับ

postgraduate (adj): of a person who already holds a first degree and who is doing advanced study or research; a graduate student - หลังได้รับปริญญาแล้ว

professional (adj): relating to a particular type of job or career and its rules, standards, and arrangements - เกี่ยวกับอาชีพ

prove : to use facts, evidence, etc. to show that something is true - พิสูจน์

skill : the ability to do something well, usually as a result of experience and training - ฝีมือ, ทักษะ

suitable : acceptable or right for someone or something - เหมาะสม

undergraduate : of a student who is studying for a first degree at a college or university - เกี่ยวกับนักศึกษาปริญญาตรี