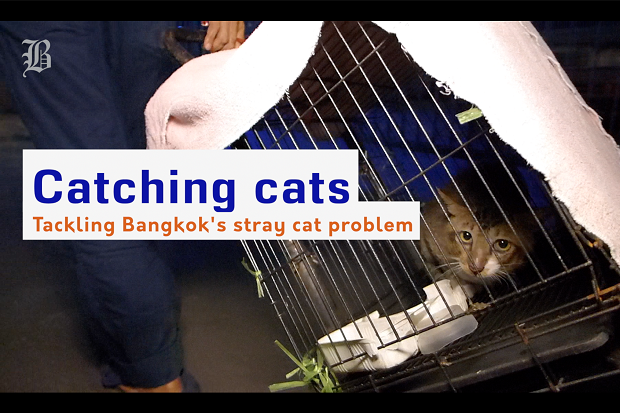 Bangkok Post Learning recently spent a couple of nights working with Apple. We followed her as she left traps and returned every few hours to see if she'd caught a cat. Apple typically works from around 9pm til 7am the next day - this is the best time to catch cats, when they are hungry and less people are around.

The cats are taken to a low-cost sterilisation centre where they are neutered. After their wounds have healed, Apple returns the cats to the place where she caught them. In one month, Apple can catch and neuter around 80-100 cats.

To finance the work, Apple mostly uses her own family money. However, some residents do hire her to catch cats around their homes. For more information on Apple's Animal Aid, click here.

Here is the video we made of Apple at work. For teachers and learners, there are questions, answers and a transcript below.

1. How does Apple describe herself?

2. How many cats does Apple usually catch per night?

3. Where does she take them after she's caught them?

4. How can she tell if a cat has already been neutered?

5. Where was this video filmed?

6. Why does Apple do this work?

1. Do any stray cats live near you? If so, do you or your family feed them?

2. What problems can stray cats cause?

3. Do you think neutering cats is a good idea? Why or why not?

4. Who should pay for the work Apple does?

1. She describes herself as a cat wrangler.

3. To a low-cost sterilisation centre.

4. A neutered cat will have its ear marked.

6. She's passionate about it.

My name is Apple, from Apple's Animal Aid. I'm a cat wrangler. I wrangle cats, net them, trap them, dart them for sterilisation. Because in Thailand street animals roam, and they're not euthanised. So unwanted babies are born pretty much every day.

So what I do is trap them, I sterilise them and then I return them. In English it's called TNR: trap, neuter, return.

Mainly I trap the cats with a cat trap. If I work the whole night I get maybe five to seven cats, and I take them the next morning to get them sterilised at a sterilisation centre, for low cost.

When we put the traps in the bushes, usually the cat gets in there late at night, because they're hungry, and then we get a cat.

This is a girl. Let's see if we've got tattoos or something in the ear. No, she has not been fixed.

About seven days ago we caught this cat. We trapped her here in this empty lot, which used to be Cheap Charlie's in Sukhumwit Soi 11. After seven days, we're going to release her now. She's sterilised, her wound has dried up, and she's fine, ready to go.

I do this because it's something I'm passionate about. You know, happy to do what I'm doing and to help the street cats.

bush : a plant that is smaller than a tree and has a lot of thin branches growing close together - พุ่มไม้

euthanise : to kill a sick or injured animal or person in a way in which they feel no pain, usually by giving them drugs - ฆ่าอย่างไม่เจ็บปวด, ฆ่าหรือช่วยให้บุคคลที่ทุกข์ทรมานจากโรคหรืออาการบาดเจ็บที่รักษาไม่หาย ตายอย่างไม่เจ็บปวด

finance : to provide money for something - จัดหาเงินทุนให้

neuter (verb): to remove part of the sex organs of an animal so that it cannot produce young - ผ่าตัดไม่สามารถที่จะมีลูกได้

roam : to move or travel around in no particular direction - เดินทางท่องเที่ยวโดยปราศจากจุดหมาย

sterilisation (noun): the act of making a person or an animal unable to have babies, especially by removing or blocking their sex organs - การทำให้เป็นหมัน

transcript : a written or printed copy of words that have been spoken - บันทึก

trap : a piece of equipment for catching animals - กับดัก

wrangle (v): to round up, herd or take charge of animals -