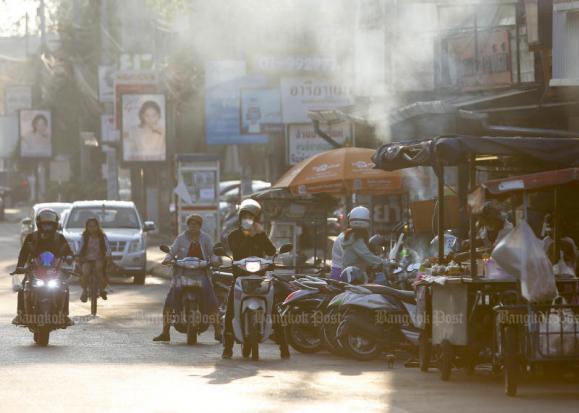 Fine dust levels were up again on Wednesday with the upper North hit hardest by the air pollution.

The level of PM2.5 peaked at 351 microgrammes per cubic metre in one of the worst-hit areas, Doi Tao district of Chiang Mai on Wednesday morning.

In the district, visibility dropped significantly while residents complained of sore eyes and itchy skin. Slash-and-burn farming was blamed for the heavy dust pollution.

In Phayao, 381 villages across nine districts were declared areas most prone to bushfires, with a ban on the lighting of outdoor fires being enforced until the end of April, which marks the height of summer.

Meanwhile, PM2.5 levels also rose again in greater Bangkok but were still on the "safe" side.

Click "play" to listen to PM2.5 level hits 351 in the North and "Download" to keep this file for educational purpose.

itchy (adj): having or producing an itch (an uncomfortable feeling on your skin that makes you want to scratch) on the skin - คัน

prone (verb): to likely to experience a particular problem more often than is usual - ที่มีแนวโน้ม

slash-and-burn : involving the cutting and burning of forests or woodlands to create fields - ไร่เลื่อนลอย

visibility : how clearly objects can be seen, or how far you can see clearly, usually because of the weather conditions - ทัศนวิสัย