“Mr President, what do you think about....?” (repeat) | Bangkok Post: learning 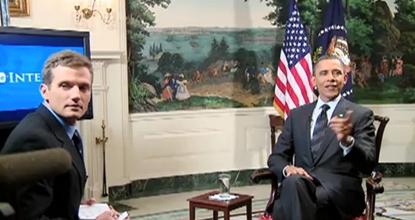 What’s it like to interview President Obama? My former neighbour Steve Grove knows and I had a chance to ask him about his experience during my recent visit to Minnesota. (video) 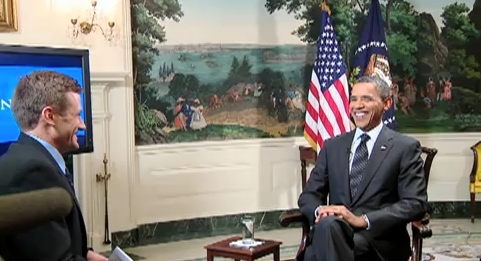 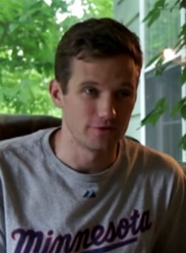 Steve Grove in his parents home in Northfield, Minnesota as he describes the experience of interviewing President Obama.

Plan on spending some time with this lesson. First you’ll hear Steve describe what it’s like to go to the White House to interview the president of the United States. Then you’ll see a video from the youtube team that did the interview showing exactly what Steve was talking about. All in all, it’s quite an exciting English lesson.

Learning tip: Come back after a few days and watch the interview again. You’ll find it will be much easier to understand and it will help you remember what you learned.

You can read what Steve says, but I suggest you watch first without reading. I think you can understand most of what is said without difficulty. Here are a few words to help you.

honour – something you do or receive that you are proud of เกียรติ
formal – very correct and suitable for official or important occasions เป็นพิธีการ
security – protection systems ระบบรักษาความปลอดภัย
social security number – a number given to working people in US who are in the government’s old-age income plan
metal detector – a piece of equipment that can indicate if metal is present, used especially to discover weapons
hang out – to spend a relaxed time at a place or with someone ใช้เวลามาก  สังสรรค์ คุยกัน เช่น กับเพื่อนๆ
chit-chat – informal, non-serious conversation
engaged – involved, paying close attention, trying to understand  ใส่ใจ, สนใจ
thoughtful – showing signs of careful thought ครุ่นคิด, ไตร่ตรอง, ใช้ความคิด,คิดหนัก
look you straight in the eye – to look directly into the eyes of someone
canned – prepared beforehand; used again and again; not original เตรียมล่วงหน้า
policy – a set of plans or action agreed on by a government, political party, business, or other group นโยบาย
favourite – something you like the best of all similar things ที่ชอบมาก,ที่โปรดปราน
regular guy – an ordinary person บุคคลธรรมดา

My name is Steve Grove.

And where are you from?

And do you still live here?

No, now I live in New York City.

Oh, OK. Since you left Northfield, where did you go to school?

I went to school in California in Claremont McKenna College and then I went to Harvard University in Boston.

Wow. Are you finished?

Yeah, I’m finished with school and now I work. I work at youtube, the video site.

The video site. OK. At youtube, have you ever done any interviewing?

I see. What’s the most – who is the most famous person that you’ve interviewed?

The most famous person that I’ve interviewed is President Obama – about five months ago.

Wow. What is it like to interview the president?

What kind of security? What do they check?

Well, before you even go, you have to send them your social security number. You have to send them your name and your date of birth. And when you arrive, you go through a metal detector, they check your pockets. They look at all your camera equipment to make sure that it’s actually a camera. It takes about five to 10 minutes just to get through the first wall of security. 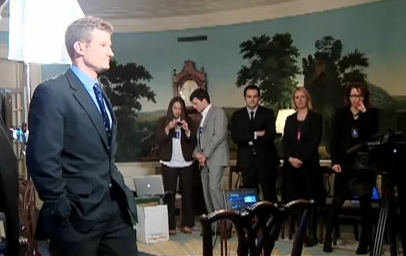 "Hanging out" in the White House before the President arrives.

OK, you’re finished with security. Then what happened?

So, after security they lead you into the West Wing of the White House and that’s where the President’s offices are. We took probably a half an hour or so to set up our cameras to get the lighting just right and, after that, we just waited. – because it takes a long time for the President to come. He’s got a lot of other things that’s he’s doing so we just hung out in the White House for a couple of hours and then, finally, the President came.

What was it like just before the President came in?

Well, it was very quiet and then someone said in three minutes the President will be here. And, so everyone was just sort of on the edge of their seat and when he walks in the run, everyone stands up. You know, the youtube people, the White House people, the camera people. Everyone stands up. He’s very relaxed, but everyone else is very formal and then we kind of chit-chatted for maybe 15 or 30 seconds before the interview started and then we began.

He was very engaged. He was very thoughtful. He looks you straight in the eye. You can tell he’s talking to you and nobody else. He doesn’t really give canned answers.
Whether or not you agree with his policy, it’s very clear that he’s thoughtful – and very engaged.

What about after the interview? Was he – did you have a chance to talk informally with him?

Yeah, you know it was actually my favourite part. After the cameras were off, then we just had a real basic conversation. We asked him what his favourite youtube video was. We asked him how he reads the news every day, what his everyday life is like and that part was really fun. He seemed more like a regular guy. 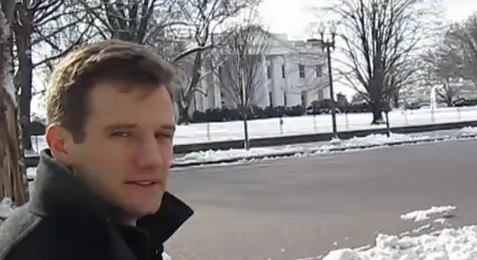 Steve outside the White House on the cold January day when the interview took place.

At the White House

Here is a chance to see what Steve was talking about. Watch especially for the group “hanging out” in the White House and Steve chit-chatting with President Obama before the interview.

This video will be more difficult to understand because of the speed of the speech, but you should be able to catch much of it. When you read the text, you’ll see it is not difficult.
Here are some words to get you started.

prepped – prepared เตรียมพร้อม
diplomatic – relating to relations between countries เกี่ยวกับการทูต
dignitary – a person who has an important official position บุคคลที่มีตำแหน่งสูง, ผู้มีฐานะสูงส่ง
ambassador – a senior official who lives in a foreign country and represents his or her own country there เอกอัครราชทูต
awesome – extremely good ดีเยี่ยม
old media – television, radio, newspapers, etc., as opposed to new media found on Internet
award – to give something to somebody as a prize, payment, etc  มอบให้
massive - very large in size, amount or number ใหญ่โต
trophy – a large silver cup or similar object given as a prize to the winner of a competition ถ้วยรางวัล
highlight – the most exciting, impressive, or interesting part of an event เหตุการณ์สำคัญ, จุดสำคัญ
paperweight – a small heavy object that you put on top of loose papers to keep them in place  ที่ทับกระดาษ
balance – the ability to keep steady with an equal amount of weight on each side  ความสมดุล, การทรงตัว
extraordinary – very unusual and surprising เกินธรรมดา, ผิดธรรมดา
incredible – difficult to believe อย่างไม่น่าเชื่อ
inspiring – exciting and encouraging you to do or feel something ที่สร้างแรงบันดาลใจ
eager – wanting to do or get something very much or enthusiastic about something that will happen กระตือรือร้น

Steve: All right Will, where are we at?

Will: We’re walking to the White House right now. Steve is all prepped and ready to go. In about two hours, we’ll be interviewing President Obama with questions from people all around the country.

So, here we are walking up to the White House right now. Steve….

Steve: Snowy, snowy January day. The White House is behind us right here. The West Wing is to the right of it and that’s where in the diplomatic room – that’s where the President greets foreign dignitaries and ambassadors – we’re going to be doing the interview bringing youtube questions to President Obama in the White House live in about three hours.

Steve: Should be fun

(Video footage of “hanging out” in the White House)

President: Steve how are you?

Steve: Good to see you again.

President:  Good to see you again.

Steve:Thanks for seeing us again.

Steve: It’s been a while.

President:  Thank you so much.

(Steve and president have microphones attached.)

Steve: You made it back from Wisconsin without too much weather problems?

President: Well, we landed and…

(Steve and President briefly discuss the set up)

Steve: How are we doing? Good?

President: You’ve got all these old media people here? (Laughs from everyone)

Steve: All right, we’re all coming out of the White House here after our youtube interview with President Obama. Here’s the team: Kevin, Will, Annie, Olivia…Ginny’s missing form the team here. She went to do another meeting.

What do you guys think?

Kevin: Pretty good. We had a lot of great questions from everybody which helped a lot. And the President was great. He talked to us about his favourite youtube videos and we awarded him with that

Will: That massive trophy I handed him. That was the highlight for me.

Annie: …which is going to become a very attractive paperweight on his desk I thinki.

Will: He immediately recognised that the balance was off and commented about it.

Annie: He commented about its extraordinary size and weight – we’re a technology company and (unclear).

Steve: Olivia, what did you think of the youtube interview?

Olivia: I thought this year was pretty incredible given that we got over ten times as many questions as we had last year. We thought last year – we got 14,000 – and that was an amazing number and this year we had almost 140,000, so that, in and of it itself, was inspiring and I think just seeing how eager the President was to answer these questions – he was really having a good time, so it was a lot of fun.